Obama Should Award Medals of Freedom to Gay Marriage Champions

Ideas
By James Richardson
James Richardson is a former spokesman and advisor for the Republican National Committee and Governors Haley Barbour and Jon Huntsman.

When the U.S. Supreme Court ruled last year that the constitutional guarantee to have and to hold extended for the first time to same-sex couples, the humanity of gay Americans was finally validated by a government that for its entire history had denied them their foundational freedoms.

Now, finally, they could build a family without the cold denial of spousal and parental rights. They could grow old together. They could even spend the occasional night banished to the couch.

But for civil rights lawyers Evan Wolfson, whom I work with, and Mary Bonauto, the decision validated a 30-year pursuit of justice that struck many as a wistful obsession. Theirs was a manic preoccupation, though, that birthed a movement that made our American union a little more perfect.

Then a third-year law student at Harvard, when many of today’s most prominent activists were still diapered, Wolfson sketched in 1983 the political and legal contours of what would become the modern movement for marriage. That plan began with one state—any state—where it could be demonstrated that gays and lesbians were owed the same freedoms as all Americans. And it was Bonauto, as lead counsel in the landmark Goodridge Massachusetts Supreme Court case, that delivered the first. She did it again, 11 years later, for the rest of the country in arguing Obergefell last summer.

Together these two understood the universal resonance of marriage before anyone else. Their lifelong pursuit of justice changed this nation for the better. Yet the honor these two so richly deserve may never arrive.

The stunning victory Tuesday by Republican businessman Donald Trump, who opposes gay marriage and will have the power to install U.S. Supreme Court justices, has set a narrowing lame duck aperture for any possible action to honor these two. The responsibility, then, falls to President Barack Obama in his final three months in office.

At no time in the history of the Presidential Medal of Freedom, our nation’s highest civilian honor, has any president honored more recipients than Obama in his last eight years. Between 2009 and 2015, Obama dolled out 102 Medal of Freedom awards, edging Ronald Reagan by a count of one. Among the massive Obama slate: Steven Speilberg, Meryl Streep, Gloria Estefan and Barbra Streisand.

No disrespect to Babs or Indiana Jones, but Wolfson and Bonauto have changed this country in a way no song or film could. They forced America to honor its promise of freedom for all, no matter the person they love.

The fight for marriage was a campaign with many fronts and many commanders, including Chad Griffin, the preternaturally spirited leader of the Human Rights Campaign, and Robbie Kaplan, the fireball litigator who erased the federal Defense of Marriage Act.

They all deserve their place in history. But few were there from the very start.

It was Wolfson and Bonauto, in the courts (both high and public opinion), who created a climate in which a president of the United States could endorse the one-fantastical idea that two men could join together in marriage, that two women were no less deserving than any other loving couples.

It wasn’t easy. Honor that and them. Mr. President, cement your legacy as gay America’s champion by cementing theirs. 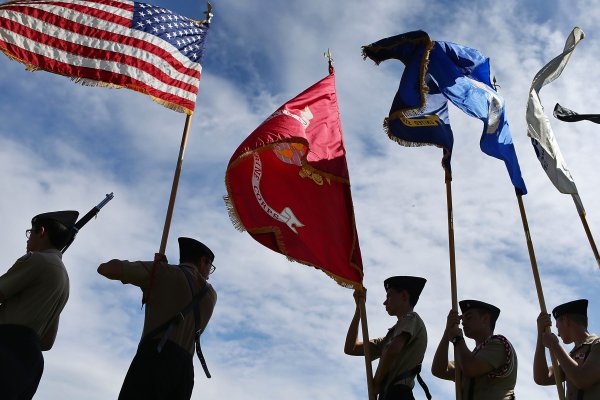 Stanley McChrystal and Jamie Dimon: How to Honor Those Who Serve This Veterans Day
Next Up: Editor's Pick