Republican president-elect Donald Trump delivers his acceptance speech during his election night event at the New York Hilton Midtown in the early morning hours of Nov. 9, 2016.
Mark Wilson—Getty Images
Ideas
By Teresa Puente
Puente teaches journalism at Cal State Long Beach and is a senior facilitator with The OpEd Project

During his presidential campaign, Donald Trump promised to build a wall and create a deportation force. Now that he is president-elect, can we expect him to follow through on those promises?

I’m less concerned about the wall: It would cost billions of dollars to build a wall, and I’m not sure even a Republican Congress would pay for it when we already have a wall or natural land barriers along much of the U.S.-Mexico border. The number of Border Patrol agents has nearly doubled since 2004.

Under President Obama’s executive order this student secured DACA, or Deferred Action for Childhood Arrivals, which took effect in 2012. It has allowed around 800,000 youth who arrived in the U.S. before the age of 16 without authorization to work and stay in the U.S. temporarily. Obama signed this order after the DREAM Act, legislation that would have given the immigrant youth a permanent pathway to legal status failed.

President Trump could end the DACA program with a signature. Many of the DACA youth, known as Dreamers, are worried that Trump will unleash his deportation force and send them back to their home countries.

Many of these youth have no memory of their birthplace. They have only known life in the U.S. They have graduated from our elementary and high schools. Many are in college.

Republican National Committee Chairman Reince Priebus said on Wednesday not to worry. “He’s not calling for mass deportation,” Priebus said on MSNBC’s “Morning Joe.” “He said, ‘No, only people who have committed crimes.’ And then only until all of that is taken care of will we look at what we are going to do next.”

But looking back on history we have seen mass deportations before.

About one million people of Mexican heritage were deported during the 1930s Depression. They were loaded up on trains and buses. Many were American citizens of Mexican heritage. During the campaign, Trump championed “Operation Wetback,” which was a 1950s government deportation program. And it must be noted that under President Obama more than 2.5 million immigrants have been deported, a record for any president.

In many of these cases, people were taken from their homes, workplaces and or deported after being stopped by police for a traffic violation. The Secure Communities program allowed local law enforcement to coordinate with federal officials. Obama ended this program in 2014 because most of the people caught had committed no serious crimes. It also had eroded trust in the police and impeded their ability to investigate serious crimes because people won’t come forward as witnesses.

Will Trump to start up Secure Communities or another program like it?

These young people who were brought here as children are not criminals. Their parents are not criminals. They are going to college and hoping to make a difference in the U.S. by working as teachers, police officers and entrepreneurs. Some want to join our military. And they will contribute to the economy. DREAM Act students could have added $1.4 to $3.6 trillion in taxable income to our economy, according to a UCLA study.

Without a legal way to work, many of these students may fall back into the shadows or be sent back to countries that they don’t know. They could lose the promise of the American Dream.

Trump’s position on immigration is strange considering that his current wife, Melania, worked illegally as a model upon her arrival in the U.S., and undocumented workers helped construct Trump hotels. It’s possible he could not act on deportations.

But many Trump supporters are calling for deportations on social media and in public spaces. There are reports of bullying in classrooms with Trump supporters telling immigrants to go back to where they came from.

The young woman I spoke to, who was too fearful to give her name, also works at a school as a teacher’s aide. She said that several of her co-workers taunted her Wednesday that immigration officials would soon be coming for her. She tried not to worry about her own fate and instead offered comfort to a 5-year-old child in her classroom who asked her “Why is my mommy crying?”

There is no comforting these children. The only question now is: what will we do?

We can’t stand by and do nothing. 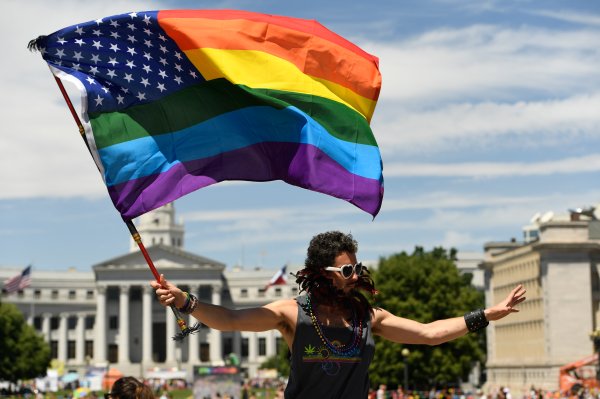 Obama Should Award Medals of Freedom to Gay Marriage Champions
Next Up: Editor's Pick