Rats Can Laugh—Provided You're Willing to Tickle Them

There’s not a PR firm in the world that could spin the reputation of the rat. They’re aggressive, they’re destructive and they’re everywhere. The global rat population is estimated to be at least 7 billion—and likely much higher than that—meaning there’s a rat companion for every single one of us. Naming yours is optional.

For all that, the mammal species we most love to hate does have at least one redeeming—even endearing—quality: Rats, according to a new study in Science, can laugh, and the best way to get them to do it is to tickle them.

Laughter as a whole and tickling-induced laughter in particular has always been something of a mystery. We are not the only species that does it. The other four great apes—gorillas, orangutans, chimpanzees and bonobos—appear to laugh, especially when they’re tickled. Dogs do too, though it’s more of a pant. Forget the hyena and the laughing kookabura of Australia. For the hyena, the signature vocalization is more a response to fear and for the Kookabura it’s a territorial call—nothing to laugh about here.

But rats may be different. Researchers have long observed the pleasure rats seem to take at playing with human beings—running to a human hand to elicit a sort of chasing game and seeming to delight in having their abdomens tickled. In both cases the animals appear to express pleasure with high-pitched vocalizations and with excited jumping, the last known as Freudensprünge—which is the kind of delicious word you can go your whole life without hearing and then, once you do hear it, can’t imagine how you lived without it.

Freudensprünge, however, is common among many animals; the laughter is rarer and that’s what the researchers who wrote the Science paper—Shimpei Ishiyama and Michael Brecht of the Bernstein Center for Computational Neuroscience in Berlin—wanted to study.

Ishiyama and Brecht began by implanting tiny electrodes in the animals’ brains—specifically in the somatosensory cortex, both because it’s the largest sensory center in the brains of mammals and because studies in humans suggest that it may be where tickle-induced laughter is processed. As a rule, of course, animals would not be likely to care for having anything at all implanted in their brains, which can go a long way toward wrecking any experiment you then want to conduct that involves having fun. As the researchers themselves note in their paper, Charles Darwin once observed, “the mind must be in a pleasurable condition” to respond to tickling with laughter.

To get around that problem, the Ishiyama and Brecht allowed the animals all the time they needed to recover after the implant and only then began to familiarize them with play. “We put a lot of effort into handling the animals such that they were very comfortable with the experimental setting,” wrote Brecht in an email to TIME, “because otherwise the animals do not enjoy the experiments and as a consequence are not ticklish.”

Once the rats were prepared, the investigators stimulated them in three ways: with vigorous abdominal tickling, gentler tickling and chasing games. In all three cases, neuronal cells in the somatosensory cortex increased their firing rate—by 77%, 67% and 80% respectively. Vigorous tickling also elicited the rats’ signature form of laughter—ultrasonic vocalizations (USV’s) at a frequency at or above 50 kilohertz, which is above the range of human hearing. Gentler tickling did not elicit the laughter, but chasing games did—similar to the way small children start giggling anticipatorily when playful parents chase them around the house and make it clear that a tickling session will be the price for getting caught. Electrically stimulating the rats’ somatosensory cortex also elicited laughter, confirming that this was the region of the brain that was involved in producing the sound, though there is no way of knowing if the rats experienced that form of laughter as pleasurable.

To confirm that the neural firing during play sessions was not a sign of alarm and the laughter wasn’t a distress call, the researchers then tested Darwin’s dictum by placing the animals in a nonpleasurable condition—or a so-called anxiogenic state—first. They did this by putting the rats on an elevated pedestal under lights, which is not a lot of fun for a species that spends so much of its time low to the ground and in the shadows. Their good mood sufficiently ruined, the animals showed far less brain activity and produced far less laughter when they were tickled. Finally—and decidedly even less pleasurably—the animals were killed and their brains dissected and stained to determine precisely where in the somatosensory all of the behavior had played out.

Just how understanding rat laughter advances the larger mission of expanding human knowledge is not immediately clear. The investigators, however, hope the work leads to a greater understanding of social and emotional processing in both rats and, importantly, humans. Less empirically perhaps, it does help redeem the rat in our estimation—or it should. It will never be a species we will embrace, but it is one, we now know, that has the very humanlike capacity to feel. 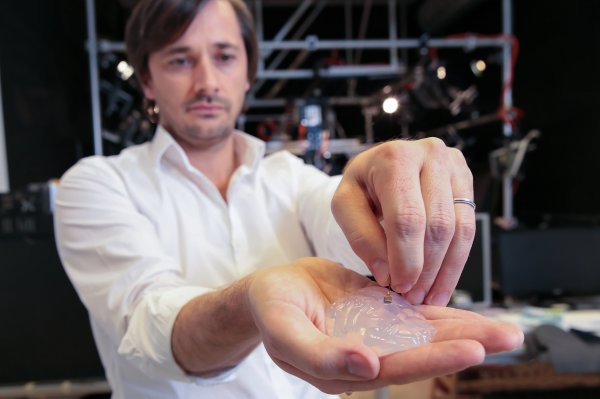 Paralyzed Monkeys Able to Walk With 'Brain WiFi'
Next Up: Editor's Pick