Stephen Colbert Is Struggling to Accept Donald Trump as President: 'This Sucks'

Stephen Colbert wasn’t sure he’d be able to do a comedy show just one day after Donald Trump was elected President of the United States. But after his somber election night special, the comedian returned to his regular slot on Wednesday for a Late Show episode in which he tried to explain Trump’s victory and offer his audience some comfort.

“Walking around the streets of New York today. A lot of people were a little rough,” said Colbert, who was pointed in his Trump criticism in the run-up to the election. “This is what it feels like when America’s made great again. And I was really hoping it would feel better because this sucks.”

After showing clips of the anti-Trump protests that broke out in cities across the country Wednesday night, Colbert spoke about the importance of free speech and ensuring people get to have their voices heard.

“We have to accept that Donald will be the 45th President of the United States,” he said, pausing as the crowd booed. “I get that feeling completely. I just had to say it one more time. I just want to keep saying it until I can say it without throwing up in my mouth a little bit.”

Later in his opening monologue, the late night host called for anyone considering leaving the country to reconsider.

“You don’t get to flee to another country when things get rough here,” Colbert said. “Being an American citizen is like family: You’re in it whether you like it or not.” 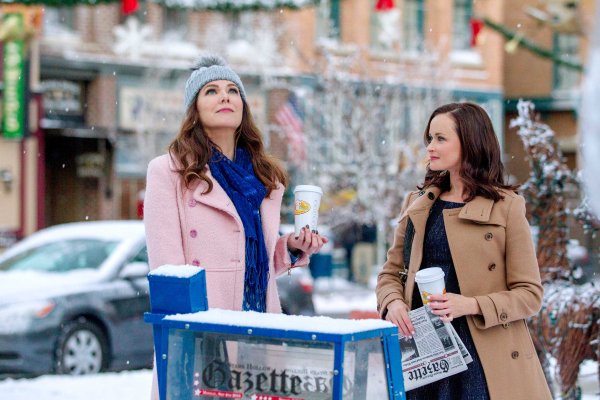 In the Gilmore Girls' Hometown, Things Are (Mostly) the Same
Next Up: Editor's Pick