Donald Trump stood before dozens of TV cameras at his new Washington, D.C., hotel for what was billed as a mid-September news conference. “Nice hotel,” Trump began, with an exaggerated nod toward the cameras, which were broadcasting live on three cable stations. Later, he invited news cameras to accompany him on a tour of the property.

So it has gone all year with Trump, a man who often refuses to distinguish between his political interests and his business promotion. He has hawked bespoke water and beefsteaks at political events, while taking his press corps to five golf courses in two countries, three hotels and a winery. In fact, there is little to stop him from using the bully pulpit to sell his business interests from the West Wing.

Indeed, Trump would be legally allowed to do far more than simply brag about his newest buildings or branding efforts from the White House. “There would be nothing that would preclude him from making a decision on trade or otherwise that could impact, for better or worse, those interests,” says Don Fox, former general counsel and acting director of the Office of Government Ethics. “It simply would not be a violation of law.”

That’s because the nation’s founders designed a system in which the President is primarily answerable to voters. James Madison wrote in the Federalist papers that it would be “vain” to believe that future leaders could always separate their self-concern from the national interest. “Conflict of interest for elected officials has been kind of embedded in our constitutional framework,” says Richard Painter, chief ethics lawyer for President George W. Bush.

That means presidential press conferences could be legally held from the Trump hotel, where a President Trump continued to boast of the property’s offerings. Trump water or vodka could be served in the White House, and Trump could choose to stay in his properties on foreign trips. And Trump would be free to talk up his wardrobe collection on trade missions around the world.

There are two main legal issues he would have to avoid, ethics experts say: traditional prosecution under government bribery laws and a little-noticed provision in the Constitution known as the emoluments clause, which prohibits U.S. officials from taking money from foreign sources without the consent of Congress. If Trump committed an official act in exchange for a financial reward from another person or company, he could open himself up to prosecution or impeachment. Prosecutors would be called upon to demonstrate a quid pro quo relationship between a specific act and a material gain for the Trump organization. That probe could be conducted by Congress or as a criminal investigation within his Justice Department, where it might prompt the appointment of a special prosecutor.

The emoluments clause bans anyone holding government office from accepting “any present, emolument, office, or title” from a foreign government without congressional approval. The clause has been the subject of almost no legal scholarship or case law but has been interpreted by Congress and the Office of Legal Counsel to prohibit even the smallest arrangements, like educational scholarships and business consulting deals, from foreign interests.

With a web of foreign business interests extending from Azerbaijan to Panama, Trump could find that the most minor contractual renewal turns into a new reason for concern. Even Trump’s oft-touted status as landlord to the Bank of China in Trump Tower could place him in jeopardy, if, for example, the state-backed bank agreed to pay above-market-rate rents in the future. “Every one of those contracts if he becomes President must be at arms length,” says Painter, “or he can get himself impeached.”

Trump could remove these potential conflicts by selling his business empire and placing the proceeds in a blind trust. He has said only that he will pass off control of the empire to his three eldest children, who serve as executives at his company. “I would probably have my children run it with my executives, and I wouldn’t ever be involved,” Trump said at a debate earlier this year. It’s a choice he now faces. 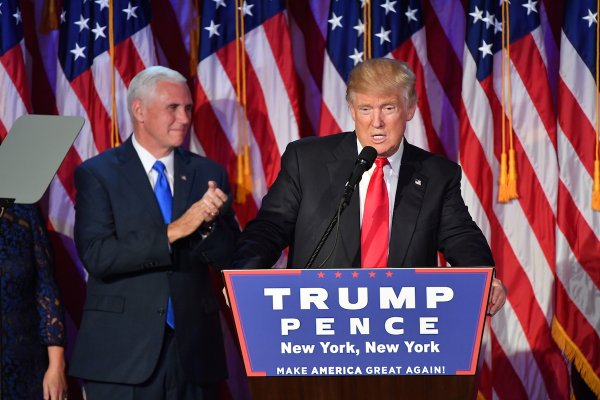 How Evangelicals Helped Trump Win
Next Up: Editor's Pick