In Arrival, Amy Adams Takes a Listening Tour of the Universe

“It’s a weird time to be promoting a movie,” Amy Adams says, pointing toward the TV in the bar of the Four Seasons Hotel in Beverly Hills, a few days before the election. It’s tuned to CNN and, even in deeply blue California, tensions are running high. “I’m not even that political,” Adams says, turning away from the television. “Part of my job is to be open to hearing sides so I can understand different people’s perspectives.” Right then, as if conjured by magic, a woman in a Trump 2016 shirt sits down across the bar. She looks at Adams and says, unsolicited, “I dare to wear this in L.A.”

Adams smiles at her. “It’s a free country,” she says warmly. She turns back and gives me a knowing glance. “There you go,” she says. “But I believe in diversity and open conversations. The more you invest in somebody else’s experience, the more you might change your own.”

These subjects have been on her mind lately as Adams awaits the release of her new film Arrival, in theaters Nov. 11. She stars as Dr. Louise Banks, a linguist tasked with learning to communicate with aliens who descend upon Earth. But as she works with a physicist (Jeremy Renner) and a military colonel (Forest Whitaker) to decode the extraterrestrial language, she begins to question her own reality. That synopsis may suggest that Arrival is just another science-fiction blockbuster, but the film actually has more in common with the prestigious fare that crowds the holiday film season: it’s a tender, intimate drama that interrogates themes of communication, memory and time–and just happens to feature a few interplanetary visitors.

It’s also a surprisingly moving allegory for our times. At the tail end of an election that’s made the country feel so stratified that basic communication across (and even within) party lines has broken down, Arrival‘s story–of trying to understand that which appears unknowably different–resonates somewhere profound. This is sophisticated, grownup sci-fi: a movie about aliens for people who don’t like movies about aliens. Adams credits a tricky, nonlinear screenplay by Eric Heisserer (Lights Out, The Thing) and the nuanced style of director Denis Villeneuve–who earned raves last year for his gritty crime drama Sicario–for imbuing the film with such an unusual texture. Still, it wasn’t a sure thing. “When I read the script, I thought, If this is done right, it’s going to be really special,” she says. “If it’s done wrong, it’s going to be epic.”

To hear screenwriter and producer Heisserer describe it, Arrival‘s journey to the screen was a “long, invisible war.” Heisserer fell in love with the source material, a short story by the writer Ted Chiang titled “Story of Your Life,” and pitched a film adaptation for years. “It just devastated me,” he says. “It’s an amazing story, and so cerebral.” But when he brought the idea to producers, they invariably balked at his vision. “I say, ‘It’s a female lead and it deals with linguistic relativity,’ and I can see your eyes are already glassing over,” Heisserer recalls. Eventually, he wrote the screenplay on spec; on the merits of that script, he secured independent financing and attracted Adams as the star with Villeneuve as director. At the Cannes Film Festival in 2014, a heated auction between five studios resulted in Paramount’s acquiring distribution rights to the film for a reported $20 million.

Heisserer says he envisioned Adams for the role of Louise from the beginning. “She’s the kind of performer who shows you what she’s thinking just in her eyes,” he says. “Beyond that, she’s just a remarkable human being. As a friend of mine said, ‘It’s like she doesn’t know she’s Amy Adams.'” It’s true: in conversation, Adams is gracious, candid and free of movie-star affectations.

But even for a successful actor, exploring the ideas presented by Arrival felt like a rare opportunity, one that hit close to home for the mother of a 6-year-old daughter, Aviana (with husband Darren Le Gallo). “I think about how often I’ve communicated to my daughter and it’s come across the wrong way because I haven’t taken the time to think about her perspective,” she says. “I’ll speak in a language that makes sense for an adult female, but for a child it becomes overwhelming or hurtful. That’s really what it’s like talking to anybody.”

Adams, 42, found herself disappearing into a character who questions the validity of her experience. “The more you dive into [the movie] world, the more it messes with your mind–it can affect my sense of reality in a strange way, because I’m making my body and my mind believe that something is happening,” she says. “Being a mom, I can’t go home in character. I had to learn how to create separation for myself.”

Arrival isn’t the only film that sees Adams navigating complex themes this season. In the Tom Ford–directed thriller Nocturnal Animals (Nov. 18), she stars as an art gallerist revisiting an old romance through a novel written by her ex (Jake Gyllenhaal). “It has all the style you would expect from Tom Ford,” Adams says, “but it has so much substance and grit.” Both films, shot back-to-back, are portraits of women in extreme transition. The performances highlight Adams’ versatility. In Nocturnal Animals, she modulates effortlessly from friendly ingenue to polished ice queen, while Arrival starts off showing her as a woman muted by grief, then spins the character into something much more complex.

Which is why it’s no surprise that once again, awards chatter swirls around Adams, who since 2005 has received four Best Supporting Actress Oscar nominations and one for Best Actress. She, however, resolutely avoids self-promotion. “If I’m campaigning for myself, it hurts my spirit,” she says. “I don’t feel like a performance of mine has failed if I don’t get nominated. That’s not how I gauge my success.” With a movie like Arrival, which doesn’t have the genre trappings of a typical awards film, it’s less about the recognition and more about ensuring that people see it. “Whatever the awards validity of the film, I’m just super-proud that it got made,” she says. “A female-driven, emotional, intellectual, high-concept sci-fi movie!”

As for that politic temperament, Adams may end up putting it to use on a bigger stage down the road. “Right now I’m focused on acting and being a mom, but that is my intent,” she says of future work in some kind of service. “Not so much in politics, per se, but definitely organizations for change, when the time is right.” She says she’s ready to take on a different set of challenges–maybe not translating across species, but between people who have a hard time hearing each other. Promoting a movie has had her talking a lot. Next up, she wants more opportunities to listen. 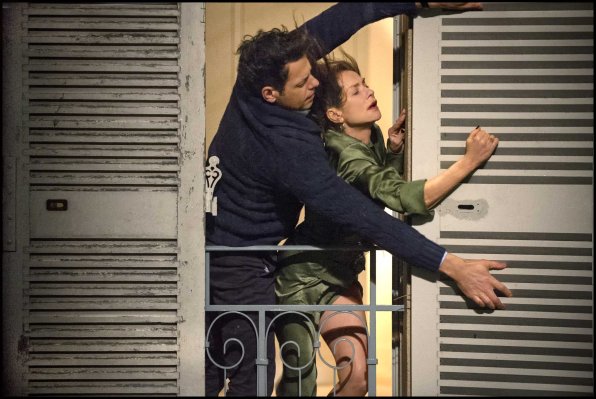