Even by the out-there standards of Basic Instinct and Showgirls, Paul Verhoeven’s latest, Elle, is a thing to behold. Part thriller, part obsidian-black comedy, part cerebral firebomb, it’s confrontational, terrible and glorious. You almost can’t believe such a picture exists.

Elle opens with a savage, horrifying rape: Michèle (Isabelle Huppert), the successful co-owner of a video-game company, is attacked in her luxe-tasteful Parisian home by a masked intruder. His getup, as one character observes, is like that of “a stalker on a TV show.” Her smoke-gray house cat looks on with mild curiosity, a characteristically blasé feline Greek chorus. Michèle sees a doctor but doesn’t report the assault to the police. It’s not that the event doesn’t trouble her. But there’s something in Michèle’s makeup that refuses to yield to victimhood, perhaps partly because she has carried, since age 10, a dark burden connected with her family’s past. The rest of the world has judged her for it, refusing forgiveness, which may be why she has learned to move through life asking almost nothing of those around her. She doesn’t just confront demons; she welcomes them.

The people in Michèle’s orbit include a rather helpless novelist ex-husband (Charles Berling), a loyal best friend and business partner (Anne Consigny) and a young, handsome new neighbor (Laurent Lafitte), whom she eyes as a potential romantic conquest; his beatific wife (Virginie Efira) barely registers as a hindrance. Among this gang, it’s at first hard to know if Michèle, with her forthright, nearly frosty demeanor, is the most well adjusted or the most messed up. Verhoeven, like that cat, seems to know all, but he refuses to give anything away easily. Each character is a playing piece in his wicked little game, though Elle is more than just a sly amusement. Beneath the picture’s cool, glassy elegance lie roiling questions about the weightiness of guilt, the uneasy relationship between sex and power, and the nature of female desire after 50–which, easily written off as a soft, cuddly thing, may in reality be a lawless beast.

At the heart of it all is Huppert, in her thorniest, funniest and perhaps finest performance. When Michèle flirts with that neighbor, her businesslike mien dissolves–but even then, her face shows not softness but prickly radiance. She’s never easy to read, which is exactly what keeps us reading. The people around Michèle hide their duskiest anxieties deep inside, while all her darkness shimmers on the surface. Huppert glows as if lit from within by some kind of unholy sunlight: she’s defiant, resplendent, teasing–and impossible to turn away from. 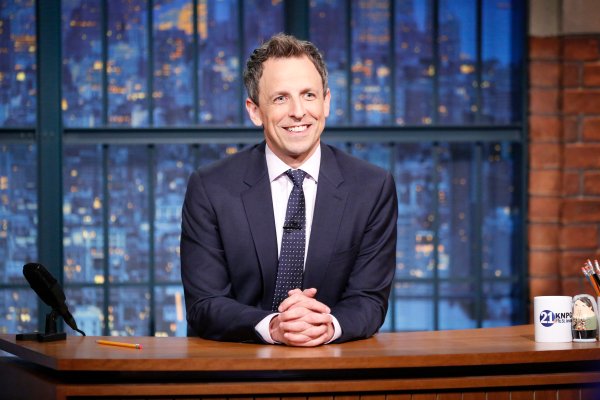 Watch Seth Meyers Face the Reality of a Trump Presidency
Next Up: Editor's Pick