Philippine President Extends an Olive Branch to the U.S. After Election

Philippine's President Rodrigo Duterte speaks to media after meeting with Philippine nationals living in Malaysia during an official visit in Kuala Lumpur on Nov. 9, 2016.
Mohd Rasfan—AFP/Getty Images
By TIME Staff

“I would like to congratulate President Trump. Long live!” Duterte said, according to CNN. “Now we’re here, I don’t want to … fight because Trump is already there.”

The outspoken Duterte, who’s war on drugs has killed more than 2,000 people, found an apparent common interest with Trump: “We both like to swear,” he said. “One little thing, we curse right away, we’re the same.”

The traditionally close ties between the U.S. and the Philippines have undergone severe strain in recent months: Duterte called the former U.S. ambassador to the Philippines a gay “son of a whore,” used the same expletive when discussing Obama and later told him to “go to hell.” Then, in front of crowds in Beijing last month Duterte announced a “separation” from the U.S.

Duterte has also called for an end to joint U.S.-Philippines military drills. On Thursday, however, Philippines National Defense Secretary Delfin N. Lorenzana issued a statement saying that Duterte had agreed to continue military training with the U.S. The focus, he clarified, would be joint training and exercises, while assault exercises and some bilateral drills would remain off limits. 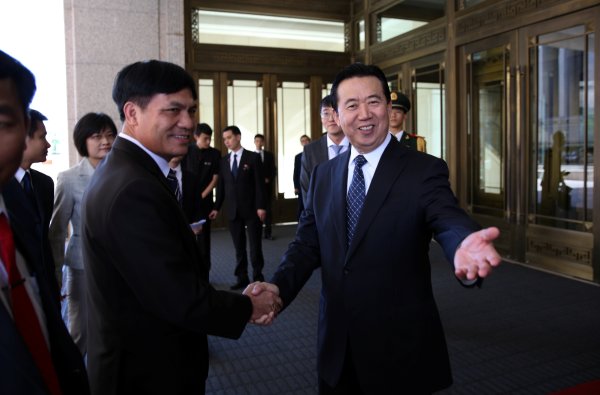 China's Security Czar Appointed as the New Head of Interpol
Next Up: Editor's Pick