As the world digested the reality of U.S. President-elect Donald Trump, the glee among China’s political establishment was hard to contain. “China is feeling a little bit delighted,” says Shen Dingli, deputy dean of the Institute of International Studies at Fudan University in Shanghai.

The giddiness comes in various forms. First, what better advertisement for the stable, technocratic authoritarianism of the Chinese Communist Party than an America so divided that half the electorate failed to recognize how disenfranchised the rest of the nation felt?

The Global Times, a Chinese Communist Party-linked tabloid, opined that the U.S. president-elect “was known for being a blowhard and an egomaniac. But if such a person can be president, there is something wrong with the existing political order.”

“There is a lot of Chinese schadenfreude about the lowly nature of the debate in the U.S. election campaign,” says Paul Haenle, director of the Carnegie-Tsinghua Center for Global Policy in Beijing. “It’s a total gift to Chinese propaganda.”

Second, Trump has shown little interest in holding China accountable for its human-rights record, even as President Xi Jinping has tightened control on free-thinkers who speak out against the ruling Chinese Communist Party. During the campaign, Trump even lauded the steeliness of the Chinese leadership for ordering the 1989 massacre of Tiananmen democracy protesters.

“Trump doesn’t care about whether China is an authoritarian state,” says Qiao Mu, media-studies professor at Beijing Foreign Studies University, who is no longer allowed to teach because of his outspokenness on political issues.

Compare that to Hillary Clinton, whose public objections to the Chinese Communist Party go back decades, from her critical speech at the 1995 U.N. Women’s Conference in Beijing to her tenure as U.S. Secretary of State.

“Trump is not going to be as harsh on human rights as Hillary Clinton would have been,” says Zhang Ming, a professor at the Institute of Political Studies at Renmin University in Beijing.

Third, while Barack Obama talked about pivoting toward Asia—a foreign-policy maneuver that the Chinese saw as little more than containment—Trump campaigned on isolationism. He has scorned the proposed Trans-Pacific Partnership (TPP), the 12-nation trading bloc that was supposed to add economic ballast to Obama’s Asia pivot. Trump has also threatened to tear up defense treaties with America’s Asian allies, such as Japan and South Korea.

“The Chinese like that Trump talks about America growing inward, that the U.S. is overreached in the Middle East, that he’s ripping up TPP, that he’s not paying much attention in Asia,” says Haenle. “Trump says we need to pull back. All that sounds great to the Chinese.”

An increasingly assertive Chinese government has turned disputed islets in the South China Sea into de-facto military bases. At the same time, Beijing has unleashed a charm offensive on Asian leaders whose countries are embroiled in territorial disputes in the vast waterway, such as the Philippines’ Rodrigo Duterte and Malaysia’s Najib Razak. After decades in which the U.S. Navy prided itself on keeping the peace in the Pacific, could China capitalize on American inattention in the region?

“In terms of the South China Sea, Trump’s conservatism and isolationism mean he will intervene less,” says Zhang. “There will be less trouble for the Chinese government.”

But Chinese foreign policy cannot depend solely on expectations of American insularity. With exports flagging and growth slowing, Chinese rulers must attend to the world’s most important bilateral economic relationship. As a candidate, Trump talked tough on China trade. He vowed to name China a currency manipulator. He spoke of a 45% tariff on Chinese imports. While presidential candidates perennially denounce China only to moderate their positions when they take office, Trump rode to power on a wave of protectionist sentiment. The voters who swept Trump to victory think that China has stolen their jobs through unfair competition. That’s sobering news for a country that has profited more from free markets than almost any other economic power.

“Trump’s victory has a direct impact on our trade relationship,” says Shen Minggao, an economist at the Caixin think-tank. “Brexit and Trump’s win show a clear trend of de-globalization and Trump’s election will serve as a huge blow to China’s economy.”

Some Chinese academics aren’t as worried. They regard Trump as a businessmen who has also profited from economic cross-pollination. “Trump is against TPP but he’s not against globalization,” says Fudan University’s Shen. “TPP is 12 countries selected by America, and it expels other countries. That’s not free trade. WTO is globalization, and Trump has never said he’s against the WTO.”

That may be. But Trump has said a lot of different things at a lot of different times. That leads to another worry for China’s leadership. Without electorates to upend local politics, China’s ruling Communists value stability—both at home and abroad. “The Chinese are always worried about uncertainty,” says Haenle. “Even though they like that America is probably going to be pulling back from Asia, they also don’t like surprises. Trump is not predictable.”

In the end, Trump’s victory has not prompted the kind of existential worries in China that it has in other parts of the world. For some countries, the election of an isolationist populist as the American President carries troubling messages for local political development or regional security. China, though, sees itself as the center of the world, just as America still does.

“China is rising,” says deputy dean Shen. “China is quite different from when Barack Obama became president eight years ago. The U.S. has far fewer resources to force China to do something. China should not worry about Trump coercing us.”

—With reporting by Yang Siqi and Zhang Chi/Beijing 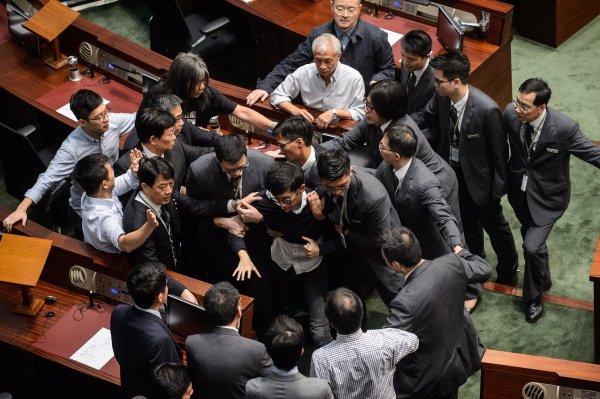