Frank Luntz: What the Polls Were Never Going to Reveal

Ideas
By Frank Luntz
Luntz is a pollster and communication advisor. He is conducting focus groups for HBO and Vice News ahead of the 2018 elections.

It doesn’t exactly roll off the tongue, does it?

A campaign that began with him blithely riding down an escalator ends with him boldly ascending to the highest office in the land.

Polls missed it. Pundits dismissed it. Prognosticators blew it. For decades, millions upon millions of Americans have felt looked down upon and left behind. They were mad as hell. Tuesday night, they declared in unison: enough.

Their vote was their voice. And the resounding electoral echo was historic, unforeseen and unprecedented.

While many Americans are surprised by the result, the people who populate the punditry class are truly shocked by it. I’m one of them. Many of us relied on a set of polls that were structurally off by two or three points in favor of Clinton, and exit polls that were simply wrong. Trump voters weren’t lying to the pollsters or afraid to be counted. On Election Day and before, they simply refused to be polled. They refused to participate in a political exercise they saw as rigged against them.

But it wasn’t just the polls that were off. Never has the political class/industry/elite so misread the electorate and so misunderstood American priorities. The echo chamber of journalists, politicians, corporate leaders and the international community kept reassuring itself that there was no way “a man like him” could win, even in times like these.

The American people decided differently. They did it the British Brexit way, using this election as a vessel to vent their anger against All Things Big. They proved that intensity was more important than organization. They proved that states we’ve been conditioned to think of as “red” and “blue” in the last four elections are actually made up of living, breathing people who will keep voting for change until they finally get it.

This is a wake-up call for everyone at every level of government. Governors, Senators, mayors—everyone needs to have a retreat where they can work together to bring about peace in the populace.

Importantly, this isn’t about government officials reconciling with each other—which in itself is needed. Rather, it is about them facilitating their constituencies to reconcile with each other. It’s about bringing people together, bridging our divides and binding our wounds. That’s what real leadership is about.

We know Trump proved to be a master of sailing on the trade winds of disenchantment and frustration; what remains to be seen is if he can make peace with those he profited from attacking. He should heed the advice from one of my favorite lines in Game of Thrones: “We only make peace with our enemies. That’s why it’s called making peace.”

Looking ahead, I asked Election Day voters what they wanted most from their elected officials to “fix their government.” Fully 58% said they want “leaders who are willing to compromise and work with everyone to get things done,” compared to 42% who want “leaders who have big ideas and real solutions, even if their boldness creates some division.” Swing voters overwhelmingly want compromise by 69% to 31%. Democrats wanted compromise by 65% to 35%. Republicans are the exact inverse, preferring boldness by 65% to 35%.

This is the looming challenge for Donald Trump and a Republican Party that is only temporarily less fractured after its electoral triumph. My recommendation to him, and to all elected officials, is to remain true to an agenda of dramatic change (which wide majorities of voters want), but to adopt a tone that is welcoming rather than incendiary. Whoever came up with Trump’s “contract with the American voter” certainly deserves a place in his cabinet.

The best place to start is with the inefficiency, ineffectiveness and unaccountability of the federal government. Nearly 7 in 10 voters (69%) told me that when government increases spending, “generally more is wasted,” compared to just the 31% of those who believe “generally it delivers more.” Nearly 3 in 4 (72%) said, “I pay for more government than I receive,” while just 28% said, “I received more from government than I pay for.” If Donald Trump is serious about draining the swamp, he’ll start with a forensic audit of the federal budget, going line by line, program by program through the thousands of pages until he has enough programs to cut to bring our books to balance.

The bottom line: voters have made it clear that they want a shake-up… and they want progress, not just bomb throwing. What remains to be seen is whether Trump can be as effective a President as he was a candidate. As for everyone else—and that includes Congress—be kind to each other. Don’t spike the football or take the ball and go home. Don’t silo yourselves in anger. America has a future. It will only be a bright one if we work together to get there. 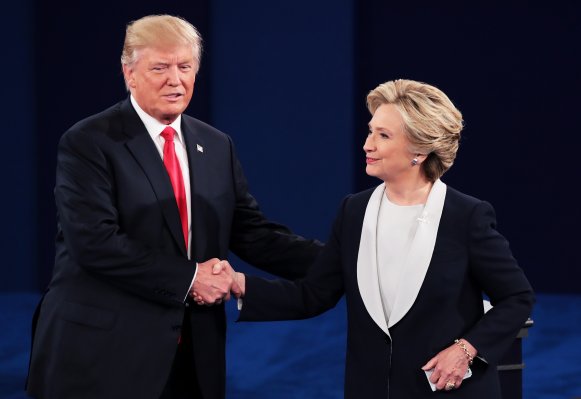 Gun Control Is Twice as Important to Black Voters Than to White Voters
Next Up: Editor's Pick