After warning for months that a Trump White House would create uncertainty and damage sentiment, investors poured money into sectors that may benefit from the former reality TV show star’s victory.

That was a steep reversal from the previous night, when financial markets reacted violently as Democrat Hillary Clinton’s path to victory disintegrated and S&P futures dropped 5 percent before a trading limit kicked in.

“The stock market is acting like a teenager. It makes a lot of demands but it doesn’t know what it wants,” said Jake Dollarhide, chief executive officer of Longbow Asset Management in Tulsa, Oklahoma.

Gains of over 3 percent each in the heavily weighted healthcare and financial sectors pushed the Dow Jones industrial average up over 1 percent. The Dow was just shy of its record high.

The real estate sector fell 2.28 percent and utilities lost 3.68 percent. Both sectors are proxies for bonds, which also fell.

“Anything that Trump mentioned during the campaign, any industry he has mentioned, favorably or unfavorably, is moving today big-time,” said Tim Ghriskey, chief investment officer of Solaris Group in Bedford Hills, New York.

A curb on drug pricing was a key campaign theme for Clinton, while Trump has called for repealing the Affordable Care Act and loosening restrictions on banks enacted after the financial crisis.

Trading volume was the highest since June, when Britain voted to abandon the European Union.

Republicans maintained their majorities in both chambers of the U.S. Congress, potentially enabling the party to reshape Washington with two years of “unified” government.

“Regardless of the fact you had a Republican sweep, there are still checks and balances in place,” said Art Hogan, chief market strategist at Wunderlich Securities in New York.

“So you are going to have some of your more fiscally conservative Republicans that will certainly slow (Trump) down from doing anything crazy in terms of policy changes.”

Wall Street is typically seen as preferring gridlock, or shared control of the White House and Congress, over a sweep of both chambers of Congress and the presidency.

The CBOE Volatility index, a gauge of investor anxiety, fell 23 percent and was on track for its biggest daily drop since late June.

Shares of big pharmaceutical companies gained, with Pfizer jumping 7.07 percent, the biggest driver of the S&P 500’s gains. The iShares Nasdaq Biotechnology ETF surged 8.93 percent and was on track for its biggest daily percentage gain in eight years.

Advancing issues outnumbered declining ones on the NYSE by a 1.24-to-1 ratio; on Nasdaq, a 2.59-to-1 ratio favored advancers.

About 11.7 billion shares changed hands on U.S. exchanges, far above the 7 billion daily average over the last 20 sessions. 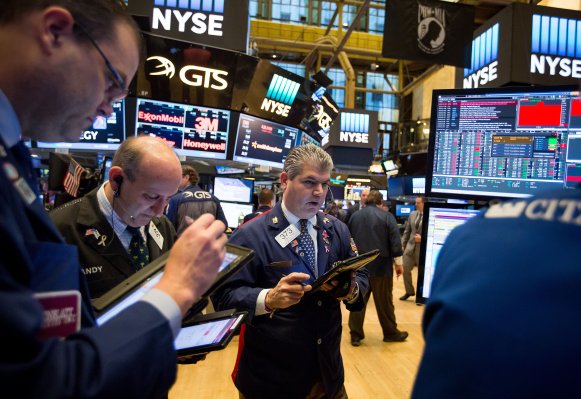