A powerful coalition of social conservatives, evangelicals, Tea Partiers and fiscal hawks gathered in Washington, D.C., this week to lay out a framework for “transformative conservative leadership” under President-elect Donald Trump.

Representatives from Freedom Works, the Susan B. Anthony List, the Tea Party Patriots Citizens Fund, Club for Growth and seven other highly influential conservative organizations, many of which did not support Trump as the Republican nominee, all lined up behind the new president.

“We will be an enthusiastic army” working with the new administration on a “pro-growth agenda,” said Club for Growth president David McIntosh, whose organization underwrote a campaign of attack ads against Trump earlier this year.

“I was one of many who did not support Donald Trump in the primary,” said Penny Nance, who heads the Concerned Women for America’s Legislative Action Committee, “but I believe that the bumps that we came upon, the rockiness early on in our relationship, made us stronger, brought us more together.”

“He was not our first choice,” added Ginni Thomas, the founder of Liberty Consulting, but said her organization saw 2017, the first year in which all three branches of the federal government will be controlled by Republicans for just the second time since 1929, as a “transformative world event” similar to the fall of the Berlin Wall.

“This is a new American Revolution,” said Richard Viguerie, the chairman of ConservativeHQ. “The Bush wing of the Republican Party is dead. It was buried by the American people.”

Some of the groups present at the meeting advanced dissonant agendas for a new Trump administration. McIntosh, for example, said he thought the Trans-Pacific Partnership was a “good agreement” while FreedomWorks President Adam Brandon urged Congress not to pass it. But the take-home message was clear: Grassroots groups on the right see Trump’s victory Tuesday not as a validation of Republican leadership, but as a mandate to fundamentally remake Washington in their image.

In planning for 2017, Brent Bozell, the head of conservative advocacy group Media Research Center, suggested that Republicans take notes from President Obama, who enjoyed Democratic majorities in Congress during his first two years in the White House. “He came in with an agenda of legislative priorities, one after another after another after another, and he believed that was his mandate,” he said. “I would expect President Trump is going to do the same thing.”

At the top of their list is to undo as many of Obama’s policies as possible to “bank a lot of wins in the first several weeks,” Bozell said. Many of those actions could be achieved through executive action—”unfiating the fiats,” as Bozell put it.

1. Appoint “a pro-life justice” to the Supreme Court

In May, Trump first published a list of 21 potential nominees, all of whom have met conservative criteria that they be pro-life and pro-gun, to fill the seat of former Justice Antonin Scalia, who died in February. Tony Perkins, the president of the Family Research Council Action, described Trump’s election as a rejection in part of “a Supreme Court that has acted as an oligarchy for the last four decades.” With 80-year-old Justice Anthony Kennedy and 83-year-old Ruth Bader Ginsberg on the bench as well, several conservative leaders said they expect Trump will eventually appoint several like-minded justices to control the court for decades.

Republican majorities will likely jump at the chance to scrap the long-hated law shortly after taking office in January. But none of the conservative groups present at Wednesday’s meeting cited a specific plan on how to replace it (except to suggest, as McIntosh did, a “free market solution.”) In June, Speaker of the House Paul Ryan published a barebones blueprint that would create new refundable tax credits and reform private health savings accounts to help lower and middle class Americans afford insurance. Roughly 20 million Americans currently get their health insurance on the public exchanges created by Obamacare.

Ralph Reed, Chairman of Faith and Freedom Coalition, said his group planned to push the new administration to take seriously Trump’s campaign promise to blow-up the U.S.’s negotiated pact with Iran. From a constitutional standpoint, Trump has all the cards: since the deal was a political commitment, and not a formal treaty, which requires Congress’s ratification, Trump will have the power to simply stop waiving the sanctions, to renegotiate the terms entirely, or to simply renege on the U.S.’s commitment so far.

A Republican-majority Congress has already passed legislation in recent years banning federal funding to health care centers that provide abortions and outlawing all abortions after twenty weeks, but it was vetoed by President Obama. “We had the wrong president, so of course he didn’t sign it,” said Marjorie Dannenfelser, the president of the pro-life Susan B. Anthony List, “but this time will be different.” Nance, of Concerned Women for America, agreed that “now is the time” to permanently codify the Hyde Amendment, a 40-year old provision barring the use of federal funds to pay for most abortions.

“We will support the tax cuts, the repeal of Obamacare, the cutting of regulations that are killing millions of jobs,” said McIntosh of the Club For Growth. While he didn’t cite any particular tax reform plan, Trump’s two proposed tax plans, as well as Speaker Ryan’s more comprehensive version, all promise large tax breaks to top income earners.

6. Undo all of Obama’s executive actions

Conservative leaders say they’ll hold Trump to his campaign promise to “cancel immediately all illegal and overreaching executive orders.” That could include dozens of Obama administration executive actions, from its commitment to the Paris Agreement, the treaty to reduce global warming, and executive guidance on protecting transgender students from discrimination to Obama’s executive order requiring all gun sellers to have a license and conduct background checks. The White House’s executive action prohibiting federal contractors from discriminating on the basis of sexual orientation or gender identity and the Pentagon’s decision to remove the ban on transgender service members are also on the list. Perkins drew murmurs of support from his conservative allies Wednesday when he suggested that Trump rescind Obama’s executive actions that “make a social experiment out of the U.S. military.”

In 2014, the conservative Heritage Foundation also published a list of “abusive” executive actions by Obama administration agencies, which included the Education Department’s move to underwrite states’ Common Core standards and the Justice Department’s tacit refusal to enforce federal drug laws in states that have legalized marijuana.

Getting rid of the Deferred Action for Childhood Arrivals program, or DACA, which protects children who were brought to the U.S. illegally from deportation, and the Deferred Action for Parents of Americans and Lawful Permanent Residents, or DAPA, which was designed to protect illegal immigrants who have lived in the U.S. since 2010 and have children who are American citizens are at the top of many conservatives’ list. In June, the Supreme Court struck down large parts of those measures, both of which were passed by executive action, Trump could score a win with conservatives by expunging them from the books.

Several conservative leaders noted Trump’s campaign pledge to “reform the entire regulatory code” to and to place a “temporary moratorium on new agency regulations that are not compelled by Congress or public safety.” That could include, they mused, all Environmental Protection Agency regulations that haven’t been finalized, which includes Clean Power Plan limiting carbon emissions, and some pending regulations associated with the Dodd-Frank Wall Street Reform and Consumer Protection Act. While most of the financial regulatory agencies, like the Securities and Exchange Commission and the Federal Reserve, are technically independent, Trump will have unilateral power to appoint those agency heads. Depending on a pending federal court appeal, the Trump administration may also have the power to replace the director of the Consumer Finance Protection Bureau, the agency created by Dodd-Frank and the brainchild of Massachusetts Sen. Elizabeth Warren.

At the meeting Wednesday, the Madison Coalition also advocated for the passage what’s known as the “Madison Rule,” which would require that Congress approve any major new federal regulation. The Madison rule would effectively end federal agencies’ normal operations.

Section 212(f) of the Immigration and Nationality Act gives presidents near unilateral power to control the borders. It reads, “Whenever the president finds that the entry of any aliens or of any class of aliens into the United States would be detrimental to the interests of the United States” the president can keep them out for “such period as he shall deem necessary.” While the conservative coalition Wednesday talked only obliquely of closing the border and pursuing tougher national security concerns, Trump will have the power to ban immigration from any list of countries he chooses that he says pose a threat owing to “radical Islamic terrorism.” On Wednesday’s Trump’s campaign promise to impose a “total and complete shutdown of Muslims entering the United States” was taken down from his website.

Trump’s campaign promise to spend $500 billion dollars on new infrastructure has drawn ire from Republicans worried about big government expenditures. But the conservative groups gathered Wednesday were on board with Trump’s plan. Club for Growth’s McIntosh said that conservatives are not against federal government spending on “roads and bridges” so long as it’s done right. He suggested his group would back an infrastructure bill that did not include big pork spending projects and that funneled federal money to the states, which could choose which projects to spend the money on.

While it’s not clear how much of these action items the Trump administration will implement immediately, or what Trump’s top priorities will be, Reed, of the Faith and Freedom Coalition, said the populist, evangelical, Tea Party wing of the Republican Party was now inarguably at the helm.

“There were an awful lot of premature obtituarlites written about us,” he said with a smile. “But as Mark Twain said, ‘The reports of our death have been grateful exaggerated.’” 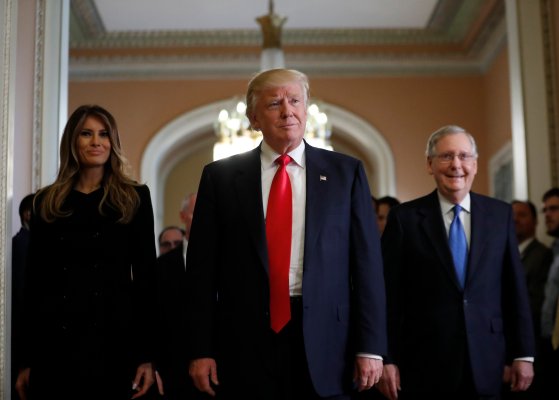 Obama Welcomes His Successor to the Oval Office
Next Up: Editor's Pick