Just four hours before, I’d watched the country I love elect a man whose words suggest that he believes my daughters and I are objects to be grabbed and graded, a man who has falsely called an entire culture rapists, a man who has denigrated the disabled, a man who has suggested banning members of an entire religion from our country. I went to bed finally fully understanding that about half of America supports this man, and that racism often trumps all else. It was a gutting lesson, one that my friends of color have been desperately trying to teach us for years.

Just hours before that electoral college tally came in, my two beautiful 8-year-old girls had bounded off to bed chattering about the election. Too old to be oblivious to the constant barrage of news and campaign updates, but too young to understand the specifics of what was at stake, they cheerfully made me promise to tell them who won when I woke them up.

Now, at 6:45 a.m., I had to move. I had to force my legs to walk across the house into their bedroom, where I would see them blissfully, angelically asleep, their little perfect faces peeking out from their warm covers.

I tried to keep the tremble out of my voice as I woke them. I helped them get ready, saying the minimum. I didn’t know how to tell them. How do you look into the eyes of the hopeful youth and tell them everything they have loved is a lie? How do you answer when they ask you if their friends will have to move away? What do you say when they stare at you, empty and incredulous and scared for reasons they don’t quite understand?

I kept starting with “hey, girls?” And then my mouth would dry up and the tears would well, and I would busy myself with another morning task instead. This happened three times. I didn’t want to cry when I told them. I didn’t want to alarm them. I didn’t want them to go to school with targets on their backs for talking about all the reasons Trump should not have been elected. They knew them by heart because they’ve followed this campaign with me. This is the world into which I am sending them, and they have a right to know what’s in store. But we live in Florida, and their elementary school is Trump-leaning. And I am suddenly afraid of free speech.

“Hey, girls,” I finally managed. “So, Donald Trump will be our next President.” The tears started coming, so I looked away quickly and when they asked, I blamed it on sickness. I needed to be strong for them, to instill within them strength of their own. After all, they will be the generation most affected by this.

“I feel bad for the black people, mommy,” said one.

“Yeah, and for the poor people,” the other said.

“Try not to talk about it in school,” I said, knowing some of their teachers would be elated at this red-tide victory.

They nodded, wide-eyed. Then we walked to school. Like we always do. As if the country hadn’t just galvanized around a sense of disillusionment and hopelessness.

Racism and sexism have had a bully year, fueled by deep-seated fear propelled by stereotypes like anchor babies, slovenly immigrants, terrorists and welfare queens. For decades, many have carefully crafted a false narrative of cultural identities based on white fear, ignorance and discontentment.

And that rhetoric somehow normalized. It made those casting stones feel powerful instead of ashamed. White people allowed this fear-based hate to grow unchecked until it became the new normal, and we granted it the highest office in our land.

How do we tell our kids that we did this to them? How do we live with that? 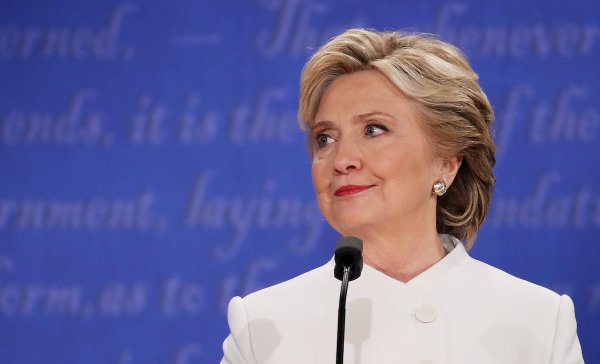 Here’s What Past Candidates Have Done After Losing Presidential Elections
Next Up: Editor's Pick