Evan Greer is a Boston-based transgender activist, musician, and campaign director for digital rights group Fight for the Future.

President Obama has just 71 days until Donald Trump is inaugurated as our next commander-in-chief. That means he has a matter of weeks to do one thing that could help prevent the United States from veering into fascism: declassifying and dismantling as much of the federal government’s unaccountable, secretive, mass surveillance state as he can — before Trump is the one running it.

During the Obama administration, warrantless spying programs have vastly expanded, giving the government more power than ever before to constantly monitor all of us by collecting our emails, texts, phone records, chats, real-time locations, purchases, and other private information en masse. This indiscriminate spying isn’t just happening in some National Security Agency bunker. It has reportedly spread throughout dozens of agencies, from local police departments to the Drug Enforcement Administration, Internal Revenue Service, and more.

Trump has repeatedly called for more government surveillance. And he has made it very clear exactly how he would use such powers: to target Muslims, immigrant families, marginalized communities, political dissidents, and journalists.

Our next President has shown utter disregard for the U.S. Constitution, exposing himself as an open enemy of press freedom, repeatedly saying he would ban all members of a major world religion from entering the country, and lashing out at political opponents with censorship and lawsuits that make a mockery of free speech. Let’s not forget that he has also called for women who seek abortions to face punishment, has boasted about sexual assault, and is currently facing multiple court cases related to sexual harassment and abuse.

The surveillance apparatus that has grown in this country since 9/11 has always been wrong. Surveillance technology, often used without a warrant, has been repeatedly abused to target specific racial, ethnic, and religious groups. The government listens in on activists from groups like Black Lives Matter to Standing Rock. We’re collecting more data than we know what to do with. Experts agree this information overload is not effective at stopping violent attacks. In fact, it has undermined, rather than strengthened, public safety and security.

In Trump’s hands, these programs could become more dangerous than ever before. Too many of these efforts operate shrouded in secrecy, without meaningful oversight from the public, the courts, or even elected officials. The precedent set by expanding executive power during the last several administrations means that Trump, and the officials he appoints, will be able to use these pervasive snooping programs for their own political ends, almost completely unrestricted, and without transparency.

Mass surveillance has already had a statistically measurable chilling effect on freedom of expression. Imagine how much more harm it could do in the hands of President Trump. The future of our most basic rights and freedoms is at risk.

This is exactly why unfettered government spying programs are so dangerous. No matter what their creators’ intentions may be, their use can quickly spiral out of control. The recent prosecutions of whistleblowers under the Espionage Act, which the Obama administration has normalized over the last decade, will only embolden Trump to abuse his new power to surveil, censor, and incarcerate dissenters to the fullest extent possible.

The country is now counting on President Obama. This is his last chance to secure his legacy as the President who, in his final hours in office, did something extraordinary.

He should shut down the NSA and related mass surveillance programs. He should physically destroy the databases where the sensitive personal information of hundreds of millions of people are illegally stored. He should release Chelsea Manning and pardon Edward Snowden. He should support efforts in Congress to curtail location-tracking and other dangerous data collection. He should declassify and reveal to the public any programs that he does not have the power to end. He should drag them into the light of day so we have a fighting chance of stopping them during Trump’s reign.

He should bulldoze the data centers, computers and all, if he has to. He alone has the power to dismantle the U.S. surveillance state, before it falls into the wrongest of hands. 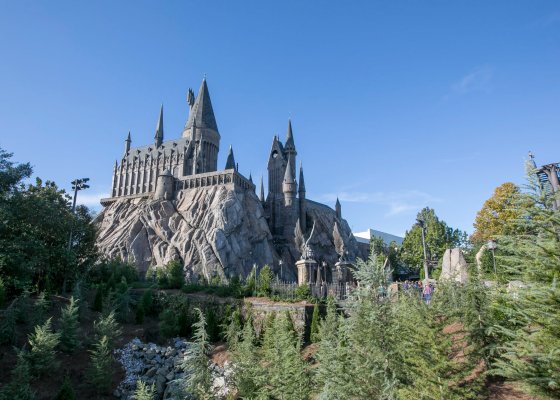 Now You Can Finally Do Magic With a Harry Potter Spell-Casting Phone
Next Up: Editor's Pick