Graceful and pained in defeat, Hillary Clinton ended her presidential campaign in a Manhattan hotel ballroom as she had begun it: with a plea to heal the wounds of a divided and confused nation.

“Our campaign was never about one person or even one election. It was about the country we live in and about building an America that is hopeful, inclusive and big-hearted,” Clinton said.

“So now our responsibility as citizens is to keep doing our part to build that better, stronger, fairer America we seek and I know you will,” Clinton said.

In a bitter election marked by psychic fractures and racial anger, Clinton’s quiet and relentless message was a call for kindness, inclusion and love. It did not often break through amid this election year’s vicious rhetoric and carnival of scandals. And it was not enough to win her the presidency. But it was how Clinton chose to end a painful year.

Her words were not likely to soothe her supporters’ sense of gloom. In bars and living rooms across the country last night, young and old, they cried, embraced and comforted each other as they watched key states hand her loss after loss.

At the Javits Center, a glass building that was chosen by the campaign as a symbol of Clinton breaking what she called in 2008 “the highest, hardest glass ceiling,” the mood was dour on Tuesday night. The crowd watched, slack-jawed and silent as Clinton lost Florida, Ohio and North Carolina. One young campaign staffer began to cry. “It’s going to be okay,” another staffer said, embracing her.

But Clinton never arrived under that glass ceiling on Tuesday night.

Instead, she and her husband, Bill, began the night in a hotel room in Times Square, confident she would win. They shared a meal of salmon, roasted carrots and vegan pizza. She watched the results come in, loss after shocking loss, and finally, called Trump after midnight to congratulate him on his victory.

“I’ve just received a call from Secretary Clinton. She congratulated us, it’s about us, on our victory, and I congratulated her and her family on a very, very hard-fought campaign,” said Trump during his victory speech in the Hilton Hotel in Midtown Manhattan in the early morning hours on Wednesday.

Clinton will feel the weight of her loss for years to come, along with the miscalculations that helped sink her candidacy. The paid speeches to Wall Street firms. Her use of a private email server. The defeat, which surprised Democrats and her supporters, falls on her shoulders.

“I know how disappointed you feel, because I feel it too,” Clinton said. “So do ten of millions of Americans who invested their hopes and dreams in this effort. This is painful and it will be for a long time.”

The young women who phone banked for the nominee, knocked on doors and worked for her campaign in the hopes of electing the first woman president were particularly hurt by Clinton’s loss.

To them, Clinton was a hero and a trailblazer who entered politics ahead of her time. The defeat of the first female presidential nominee of a major political party—at the hands of a man who was accused of serially sexually assaulting women—was deeply painful.

Clinton seemed to feel the pain of that loss, too, and struggled to hold back tears when she addressed the women who supported her.

“To all the woman, and especially the young women who put their faith in this campaign and in me, I want you to know that nothing has made me prouder than be to your champion,” Clinton said at the New Yorker Hotel in Midtown, seeming to choke up for the first time.

“And to all the little girls who are watching this: never doubt that you are valuable and powerful and deserving of every chance and opportunity in the world to pursue and achieve your own dreams,” she said.

For the Democratic Party, the future is unclear. Americans have repudiated the Clintons, the Democrats’ aging royal family, along with a generation of older party heroes who had supported them. The party’s heroes are graying septuagenarians. Sen. Elizabeth Warren is 67, Sen. Bernie Sanders, 75, Vice President Joe Biden is 73. Michelle Obama has said she will never run for president. President Obama will retire to private life.

By January, Republicans will control the White House and both houses of Congress and will eye an empty seat on the Supreme Court. The Democrats’ ability to gum up a Republican agenda on Capitol Hill through filibusters has been weakened. Trump will be able to overturn President Obama’s executive orders on carbon controls and halting the deportation of some undocumented immigrants, and will quickly work to craft a legislative agenda with House Speaker Paul Ryan.

For the party that nominated the first black president, the victory of Trump— who questioned Obama’s birth and discriminated against African-Americans early in his real estate career—is a sharp sting. Did Democrats misread the country? What did they miss? What could they not understand? Did they fail to anticipate the anti-Establishment rage? Was Clinton the wrong candidate? There will be deep soul-searching among Democrats for time to come.

At the Javits Center in Manhattan, the Democratic party faithfuls and Clinton supporters were afraid of the future as the results came in. “I’m scared,” said Christy Pambianchi, who had came to Manhattan from upstate New York and had tears in her eyes. “So much was on the line.”

President Obama addressed Trump’s victory shortly afterward in the Rose Garden of the White House, urging Americans to remember that the peaceful transition of power after an election, no matter the outcome, was essential to the democracy. He vowed to make the transition to a Trump presidency as smooth as possible and said he wished the Republican president-elect success.

“Ultimately, we’re all on the same team,” the president said.

Clinton will likely win the popular vote over Trump by wide margin: more Americans voted for her than Trump. But she lost the electoral vote in states that mattered most, and her campaign organization, the data, the polling, all the analytics—none of it worked on Election Day.

Obama urged the Americans who supported him to stay encouraged.

“That’s the nature of campaigns, that’s the nature of democracy: it is hard. And sometimes contentious and noisy,” Obama said. “But to the young people who got into politics for the first time and may be disappointed by the results: I just want you to know you have to stay encouraged. Don’t ever get cynical. Don’t ever think you can’t make a difference.”

Clinton, too, called for her followers to stay encouraged. But it was also, quietly, carefully, a call to arms. And it was a reminder to keep fighting for what she has said she has fought for her whole life.

“This loss hurts,” Clinton said, “but never stop believing that fighting for what’s right is worth it.” 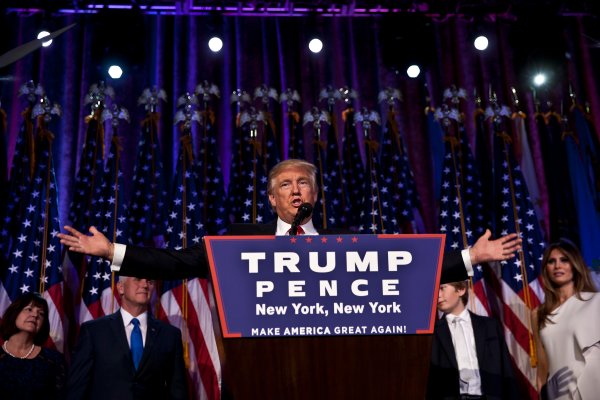