After Trump's Win, Megyn Kelly Is a Star Without a Base

After the 2012 election, Megyn Kelly emerged as a media star because she was seen as a Trojan horse within Fox News—a figure perceived as possessing sneakily liberal tendencies, thanks in large part to her refusal to indulge political strategist Karl Rove in his disbelief that President Obama was to be re-elected. But in attempting to do something similar this election cycle—speaking frankly and directly to a powerful figure in the Republican party—she found herself closer to the center of the story than she could have hoped. Kelly, even as she prepares to release a much-hyped book and as she’s more central than ever to the culture of Fox News, finds herself at an impasse: What does a figure who’s positioned herself in opposition to the establishment do when a massive number of her potential viewers see her as the establishment?

Kelly’s vexed election season began with her question to Donald Trump about his treatment of women at the first Republican primary debate in 2015. It bore the hallmarks of a typical “Megyn moment” of the sort her fans love: tough-mindedness, a sharp point-of-view, and a transcendence, within limits, of GOP talking points. And yet Trump’s reaction—from his dismissive non-response onstage to his campaign against Kelly on social media—indicated that Kelly’s power over her audience had limits. Kelly has said she received death threats, and her relationship with fellow Fox News personality Bill O’Reilly was reportedly strained. Fox News found itself at odds with the leading candidate of the party it had deep ties to. Kelly’s perceived status as more open to liberal positions than her colleagues didn’t not matter, but it wasn’t the point: In a year in which the status quo was forcefully repudiated, a nightly anchor at a major media company, however brash, was a part of the apparatus Trump set out to dismantle.

The anchor and the candidate “made up” in kabuki fashion, with Kelly hosting Trump on the first and only episode of Kelly’s newsmagazine show. The broadcast, an attempt for Kelly to broaden her aperture beyond granular daily political reporting, was unsuccessful in its goals—both Kelly’s goals of career advancement, as her audience was surprisingly uninterested in seeing her in this format, and, in large part, in making good TV. I liked it more than most critics did, both for a revealing moment in which Trump said he hurt others to “un-wound myself” and for its similarity to old Barbara Walters or Diane Sawyer specials. But that very similarity may be why she came to seem more tangential to the world of politics than she’d been. In the pursuit of Walters-like establishment megafame, Kelly was content to get a sedate, un-Trump-like Trump.

Yet Kelly grew yet more central to the world of Fox News in the wake of network founder Roger Ailes’s exit. She was reported to have encouraged female colleagues to speak out about their experience with Ailes and, as the anchor of the network’s election-night coverage who was the face of the network the next morning on Kelly Ripa’s morning show, she’s never been more visible. (On Ripa’s show, which Kelly co-hosted today, the news anchor addressed concerned detractors of Trump, telling them the President “does not affect who you are.”) If Kelly stays at Fox News, she’ll have more potential impact on what that network, reeling from the loss of Ailes, is and can be than she would at another outlet.

But it seems unlikely that her impact would be what Fox News’s core constituency has an appetite for. Kelly, for all her own moments of absolutism (declaring Santa Claus unequivocally to be white, to name one example), exists in a world of nuance. Her appetite for playing devil’s advocate can be brooked by conservative voters in moments of defeat, but it seems very off-tone in moments of triumph. How would her aggressive exchange with Newt Gingrich, in which she strongly defended her show’s right and responsibility to cover allegations of sexual harassment against Trump, play to Fox News’s traditional constituency of conservative viewers if it happened while Trump were president and Gingrich, say, a cabinet secretary? Fox News, which some might have assumed would treat the election of Trump as cause for celebration, seemed as baffled and outmatched by the moment as hosts on every other network. Trump has shown an un-Republican-like willingness to take the network’s coverage on—pushing back to un-wound himself far more than Fox had wounded him. Unlike Obama, he’s not a natural scapegoat, and unlike Bush, he’s not a natural ally.

Kelly’s work is more necessary than ever, naturally, and yet Kelly seems an odd fit for the moment. Trump can’t change who she is, but he can change her efficacy as a journalist seeking to reach an audience that powerfully repudiated facts this year. She may have pushed the network incrementally, but Trump radically redefined the alignment of his base and hers. (Clinton voters may love Kelly, but, in the main, they’re not the ones watching The Kelly File.) Kelly is a journalist whose point-of-view matters more than ever. But even as a media establishment that missed the story of the year toasts her continued success, she’s also a star without a constituency. 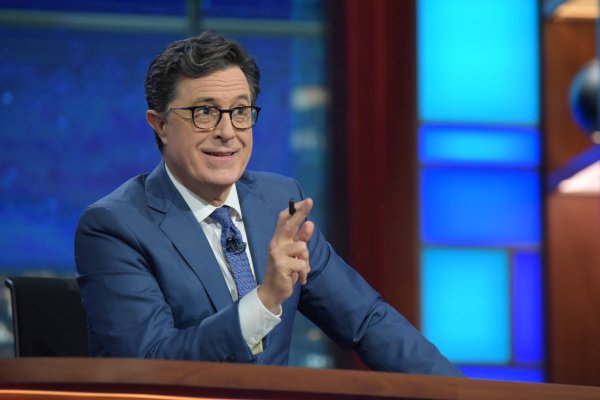 Stephen Colbert Pulled No Punches on His Showtime Election Special
Next Up: Editor's Pick