What It's Like to Use Google's First Virtual Reality Headset

The good: Affordable, Comfortable to wear, Portable, Remote supports motion controls
The bad: Limited selection of apps, Only works with Daydream-ready Android phones, Makes Pixel phone run hot
Who should buy: Android fans interested in virtual reality who don’t mind having a smaller selection of apps to choose from

The most surprising announcement to come from Google’s big annual I/O event in 2014 wasn’t its brand new Android design or its plan to bring affordable smartphones to the developing world. Rather, it was a folded bundle of cardboard that turned into a smartphone-powered virtual reality headset, aptly called Google Cardboard.

Fast forward two years and Google’s broader ambitions for virtual reality are finally coming into focus. Google’s Daydream View headset, which it unveiled in October, is the company’s first real attempt at bringing high-quality VR to the Android ecosystem. Along with the new Pixel smartphone and Home smart speaker, the Daydream View is one of several new hardware products Google has created in-house, marking a considerable change in strategy for a firm which has historically relied more heavily on hardware partners to create Google-branded gadgets.

The $79 Daydream View is a direct competitor to the $99.99 Samsung Gear VR. Both offer entry-level virtual reality, and require a smartphone to operate. But Google’s headset differs from rivals like the Gear VR in a few key ways: it’s made of a soft fabric meant to feel like clothing rather than technology, and it comes with a remote control that supports motion tracking, enabling more convincing VR experiences.

These factors put the Daydream View instantly ahead of some of its competitors. But Samsung’s headset benefits from an expansive library of content. Plus, Google’s headset only works with Android phones that support the Daydream platform. For now, that’s just Google’s own Pixel. But the firm is working with companies like Samsung, HTC, LG and more to bring more Daydream-compatible devices to market.

Here’s a closer look at what it’s like to use Google’s Daydream View virtual reality headset.

The Daydream View’s cushioned interior feels comfortable and lightweight, which should be a plus for marathon VR sessions. The fit is similar to a ski mask, while the padded material makes it much more comfortable to wear than plastic headsets. Google’s headset is also considerably smaller than Samsung’s Gear VR, making it easier to carry around in a purse or backpack.

The Daydream View is less complicated than other VR veiwers. After setting your mobile device on the open Daydream View, you just fold up the tray and loop the stretchy band around the tiny knob at the top of the headset to close it. There aren’t any clasps or latches to fiddle around with. The inside of Google’s goggles also include a space for storing the remote control when the headset isn’t in use.

Navigating the Daydream interface is like flipping through channels on a big-screen TV. Since the remote includes motion sensors, you can point at an app and click to open it, which makes maneuvering around in VR easy even for newcomers.

Google and some other developers have found creative ways to use the motion controller in their apps and games. With Google’s Arts and Culture app, for instance, wearers can closely examine specific parts of paintings by swiping on the controller’s touchpad. The puzzle game Mekorama requires players to rotate and drag parts of the stage in order to complete the level. In early demonstrations of the Daydream View, Google showcased how its remote can transform into a magic wand in Fantastic Beasts, an upcoming game based on J.K. Rowling’s Harry Potter spinoff.

The controller worked smoothly during most of my time using the Daydream View. It did go wonky once or twice, but pressing the home button fixed any issues.

Google’s headset supports 10 apps at launch, with 41 more scheduled to arrive before the end of the year. The first batch includes news apps, puzzle and action games, and VR-ready versions of Google services like YouTube, Google Photos, and Street View, among others. In many cases, these apps translate well to VR (The Wall Street Journal’s app includes interactive 360-degree documentaries). Google particularly focused on optimizing the video experience for virtual reality by releasing a new YouTube VR app for Daydream View. It’s surprisingly useful for more than just watching 360-degree videos; YouTube VR makes it feel like you’re in a movie theater rather than just staring at a smartphone screen when watching standard videos.

Still, I didn’t find the experiences compelling enough to use the Daydream View for more than 20 minutes at a time. Samsung’s Gear VR, by comparison, already offers several games that can keep me busy for some time. Some games, specifically those from VR firm Oculus’ app store, do more to take advantage of virtual reality’s unique characteristics, offering experiences impossible to replicate in typical games. Omega Agent simulates the feeling that you’re soaring over a cityscape with a jetpack, while Dead Secret challenges players to carefully search their surroundings for clues to solve a murder mystery. Both apps give Gear VR wearers a first person vantage point. The titles I played on the Daydream View often incorporated motion controls and were shown in 360 degrees, but the other than that, the experience didn’t feel much different than gaming on a phone or TV.

Watching videos and playing games through the Google’s crisp viewer was generally enjoyable, and I didn’t have to adjust the headset much to get the focus just right. But sometimes subtle glowing white dots were visible in the background, which can make the virtual environment seem less realistic and immersive. My Google Pixel smartphone also got alarmingly warm even after using the headset for just 15 to 20 minutes.

With the Daydream View, Google is clearly hoping to make virtual reality accessible to more people. The View is cheaper than similar viewers, more comfortable to wear, and incorporates motion control. But those advantages won’t matter until developers create apps that make people want to strap into their VR headsets for more than a few minutes. The Daydream has a long way to go to catch up to the Gear VR in that regard — Samsung’s headset is compatible with hundreds of apps.

Regardless, the low price makes Google Daydream a tempting purchase for those who want a good accessory for their Pixel phone. Even if the app selection is limited, that $79 essentially turns your phone into a big-screened TV for watching movies and YouTube videos, at the very least. 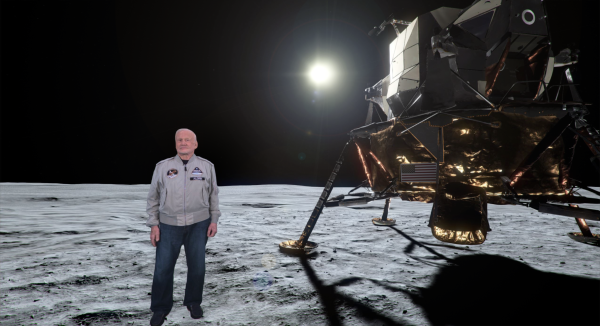 TIME Partners to Bring Holographic Recordings of Buzz Aldrin and Reggie Watts to LIFE VR in 2017
Next Up: Editor's Pick