Populist leaders in Europe have been reveling in Donald Trump’s victory over Hillary Clinton in the U.S. presidential election.

Europe’s nationalist parties see an ally in Trump. Like the Republican, these groups have gained in strength among European voters — particularly those in rural, underprivileged areas — with the similar message that immigration is eroding jobs and national identity.

France’s far-right National Front leader Marine Le Pen praised the President-elect on Twitter before his victory was even secured: “”Congratulations to the new president of the United States Donald Trump and to the free American people!,” she wrote.

In July, she told a French magazine that she endorsed Trump and said his appeal lies in “that he is a man free from Wall Street, from markets and from financial lobbies and even from his own party.” The National Front hold an anti-E.U. and anti-immigrant stance, which has been gaining momentum ahead of France’s presidential election next year. Le Pen is hoping for a historic victory in the first round of voting.

Le Pen’s father, Jean-Marie Le Pen, tweeted, “Today the United States, tomorrow France,” followed by “a terrific kick in the ass for the globalist politico-media systems, and for France’s too!” While National Front’s deputy leader Florian Philippot said “their world is crumbling. Ours is building.”

Nigel Farage— the interim leader of the far-right U.K. Independence Party and one of the lead campaigners for Brexit— was widely mocked on Tuesday for his tweet that wondered whether America would see a similar sort of populist win seen in Britain on the morning of June 24.

When it looked like Trump was going to win. Farage said it seemed like 2016 was the year of two huge political revolutions: Brexit and the nomination of Donald Trump.

Geert Wilders, the far-right leader of Party for Freedom in the Netherlands, congratulated Trump’s “historic” victory. In a second tweet that touted the hashtag #MakeTheNetherlandsGreatAgain, the anti-Islam politician said that like the U.S. the Dutch “will conquer our country” again. Wilders has pledged to close mosques, ban the Koran and secure the country’s borders if his party is elected in the 2017 parliamentary elections.

Frauke Petry, the leader of the far-right Alternative for Germany party (AfD), congratulated Trump on Twitter, calling it a “fresh start” and “historic.” She was widely chastised in Oct. for comparing multicultural societies with migrants as a “compost heap,” according to Frankfurter Allgemeine Zeitung (FAZ).

“This was a victory for the forces which oppose globalization, are fighting illegal migration and are in favor of clean ethnic states, in favor of self-sufficiency in the national economy,” said a spokesperson on a YouTube post, Reuters reports. “A great global change is starting, which will continue with nationalists prevailing in Austria, Marie LePen in France and Golden Dawn in Greece.”

Hungary’s populist Prime Minister Viktor Orban, who has been at the forefront of a campaign to restrict the E.U.’s attempt to relocate asylum seekers, said on Facebook that Trump’s win was “great news” and that “democracy is still alive.” 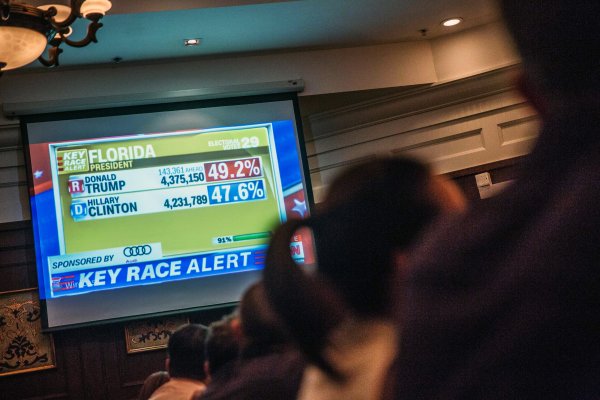 Watching the Election in a Hong Kong Bar
Next Up: Editor's Pick