Eric Greitens emerges as winner of the Missouri governor's race on Tuesday, Nov. 8, 2016, at his election watch party at the Double Tree Hotel in Chesterfield, Mo.
St. Louis Post-Dispatch—TNS via Getty Images
By Center for Public Integrity / Michael J. Mishak and Ben Wieder

Despite an aggressive financial push from Democrats, Republicans cemented their dominance of the nation’s governors’ mansions in elections Tuesday, ending the night with their highest number of governorships since 1922.

The GOP flipped control of state executives in Missouri, Vermont and New Hampshire as of early Wednesday. That means the party will hold the governors’ offices in at least 33 states, up from 31. In a stunning night for Democrats on the national stage, these additional losses pushed the party further into the political wilderness in the states, where they have been struggling to compete for years.

Defending eight of the 12 governorships on the ballot Tuesday, Democratic candidates and the political groups backing them narrowly outspent Republicans on TV ads by about $2.5 million, according to a Center for Public Integrity analysis of data from media tracker Kantar Media/CMAG. That’s a reversal from 2012, when Republican candidates and committees outspent Democrats by more than $20 million.

Democrats were trying to play catch-up with the fundraising heavyweights of the GOP. Spending on TV ads was only a part of their campaign strategy, to be sure, but those commercials play a critical role in shaping public opinion.

Just three seats were considered safe for Democrats, who had to defend governorships in five of the seven most competitive races, including contests in states Obama lost in 2012 that Donald Trump would go on to win: West Virginia, Montana and Missouri.

North Carolina remained a lone spot of hope for the party that sought to flip it from Republican control. Democratic ad spending topped $19 million in the state — more than one-quarter of the $65 million Democrats spent nationally on governors’ races in 2016. As of early Wednesday, the too-close-to-call race could be headed to a recount, though Democrat Roy Cooper had claimed victory.

Democratic Governors Association spokesman Jared Leopold remained sanguine about the results. “Democrats also will likely hold all three of our incumbents: Governors Steve Bullock, Jay Inslee and Kate Brown,” he said. “Republicans initially eyed a 4-seat net gain in 2016, and it appears they will fall short.”

Now, Democrats are looking ahead. Already struggling with a thin bench of political stars, Democrats said reversing their shrinking ranks in the states is essential to the future of the party.

“To run people for president and Senate, you have to have governors getting ready in the bullpen,” said Matt Bennett, a senior official with Third Way, a centrist Democratic think tank.

Overall ad spending surpassed $128 million for the governors’ races alone, eclipsing total outlays in comparable 2012, when, in addition to 11 gubernatorial contests, Wisconsin held an expensive recall election over Republican Gov. Scott Walker. This year’s increase was driven, in part, by the high number of open seats. Incumbent governors in five of the most competitive races were either term-limited or not seeking re-election.

No state saw more spending on ads than Missouri, which attracted roughly $36 million — more than twice what was spent in 2012 — due in part to an expensive Republican primary. Former Navy SEAL Eric Greitens emerged from the five-way race as the nominee and spent $12.7 million on ads, more than any other candidate in the country.

The spending paid off. He claimed victory Tuesday night. With a Republican legislature, the GOP now controls the state government.

While tiny Vermont’s ad spending total was much lower, $5.8 million, it saw the most spending per voter of any state: roughly $12 for each of the state’s fewer than 500,000 eligible voters. And ad spending in the state represented a tenfold increase over totals in 2012.

But interestingly, Republican Phil Scott won the race despite spending far less on TV ads than Democrat Sue Minter. He got help from the Republican Governors Association-backed group called A Stronger Vermont but still fell behind in the ad war. To voters, that didn’t matter. He won with 53 percent of the votes, according to unofficial results.

Outside groups weigh in

Outside spending on TV spots was down from four years ago, when independent groups accounted for roughly a third of ads — but that didn’t mean those organizations kept silent. This year, outside groups aired one in five political spots in governors’ races. Moreover, two of the biggest players funneled large contributions directly to candidates in Indiana and Missouri, states that have no limits on political donations.

The latter became a national focus for Republicans, who saw the Show Me State as a top pick-up opportunity. The Republican Governors Association alone poured $13 million into Greitens’ campaign, the second-highest contribution the group has ever given in a single year, according to a Center for Public Integrity analysis of IRS data. Party leaders and GOP mega-donors also pitched in. Republican Illinois Gov. Bruce Rauner, casino magnate Sheldon Adelson and shipping mogul Richard Uihlein all wrote six-figure checks.

Democrats tried to keep up, with the Democratic Governors Association and a related group contributing $3.7 million to Chris Koster. Out-of-state labor unions and groups donated another $4.2 million. But Team Greitens spent more and won.

Outside groups also played an outsize role in Montana and New Hampshire, where Democrats who sought to retain governorships faced strong Republican challengers.

In Montana, Gov. Steve Bullock squared off against Republican Greg Gianforte, a wealthy tech executive who aired more ads than any candidate in the country this year.

Hoping to offset the Republican’s money advantage, the DGA-backed Good Jobs Montana spent more than $2.5 million on ads, flooding the state’s relatively cheap media markets with at least 13,000 airings. That accounted for more than half of all ads aired by the Democratic side in the gubernatorial race.

All told, both sides spent more than $8 million on political spots in Montana — equivalent to more than $11 per eligible voter, the second highest ratio in the country. The race had not been called as of early Wednesday, though. Bullock narrowly led with 49 percent of the vote, and 74 percent of districts reporting.

Aiming to pad its overall gubernatorial dominance, the Republican Governors Association funded Live Free PAC that spent more than $1.6 million on spots for Chris Sununu, a member of the state’s Executive Council and the son of former Gov. John Sununu. He won with 49 percent of the vote, according to unofficial results.

The RGA did not respond for comment about the national landscape as results were still pending.

All politics might be local, but more than one in 10 gubernatorial ads mentioned either President Barack Obama, Hillary Clinton or Donald Trump— or in several cases, all three. And that was most evident in red states where Democrats fought to maintain control of the governorship. More than one out of every four ads in the West Virginia governor’s race, for example, attacked Obama and Clinton.

With Trump’s well-established popularity in the state, Republican ads hammered Democratic nominee Jim Justice as being aligned with Clinton and the president. But Justice, a billionaire coal magnate and resort owner who was a registered Republican until last year, responded with an ad distancing himself from his party’s national leaders.

“Let’s get this straight: I’m a coal man,” Justice says in the ad. “I have never given money to Hillary Clinton or Barack Obama. In fact, I didn’t even vote for Obama.”

The strategy worked in West Virginia: Both Trump and Justice cruised to victory there.

Experts said Democrats have a long road ahead.

The party must defend the Virginia governorship next year while also seeking to flip New Jersey, before turning to 2018, when three dozen states are expected to hold gubernatorial elections. 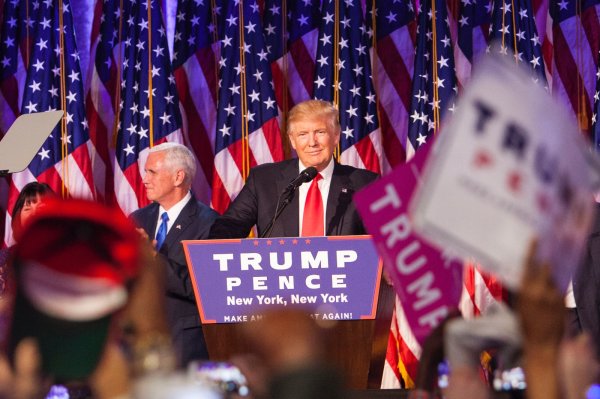