The Story Behind TIME's 100 Most Influential Photos

How do you quantify a photograph’s influence?

Over the last three years, TIME has worked with international curators, historians, photo editors and photographers around the world to answer that question and draw up a list of the 100 most influential photographs of all time. Their thoughtful nominations whittled the field.

From there, we assigned TIME reporters to see if those held up to scrutiny. We then conducted thousands of interviews with the photographers, their subjects, friends and family members to see where the rabbit hole led. TIME’s deputy director of photography Paul Moakley and I tacked up walls of pictures that constantly evolved and changed, and nation editor Ben Goldberger kept the bar high for a photograph’s inclusion.

In the end, there were pictures that we had to remove from the list, because we simply could not quantify their influence. At the same time, there were pictures that we discovered that were intriguing and delightful. The absence of many of the greatest photographers on this list might surprise, but we are prepared for lively debate and scrutiny. This project does not look at the influence of photographers within the history of the medium, but rather at how history has been influenced by specific photographs. Sometimes those two points overlap, but mostly, this project is about the unique power that still images have to influence change – some of these pictures can be disturbing in nature but somehow those are also the pictures that are seared onto the back of our brain, affirming their power.

Identifying these 100 pictures was just the start of our process. We dug into how these pictures were disseminated. A photographer can make a powerful photograph, but the means in which that photograph is shared often gives the picture its true influence. Eddie Adams’ iconic Saigon Execution was published above the fold in newspapers around the world. That placement was influential. On the other hand, the photograph of Alan Kurdi, made by Nilüfer Demir last year, became influential when thousands of people shared it on social media, leading many publications to follow suit.

In the end, this exhaustive and fascinating process – one of the most captivating in my career – unearthed incredible stories that we are proud to tell here for the first time in our interactive canvas, available from today on TIME.com/100Photos. It includes 20 moving films produced exclusively for this project.

None of this would never have been possible without TIME Inc. vice-president Rob Duffy and his team of engineers, designers, and project managers including Hans Sprecher, Mike Utskot, Cristin Williamson, Joe Van Acker and Alexander Ho, who worked to create the best interactive experience for this project. Tara Johnson and Marysa Greenawalt exquisitely produced and organized the most intricate and exhaustive labyrinth of content. Sarah Kramer’s video expertise illuminated the most powerful and delicate storytelling imaginable. And we were honored to work with a number of talents around the films including Stephen Maing, William Wedig, Gabriel Garton, Kaitlyn Emerson, Éamonn Ó Cualáin, Valerie Lapinski, Marisa Schwartz Taylor, Adrian Kelterborn, and Matt Wolf.

None of this would have never been possible without the passionate support of Nancy Gibbs, Edward Felsenthal and Ian Orefice. And a huge thanks has to go for the many great reporters at TIME, especially Olivier Laurent, Andrew Katz, Liz Ronk and former staff member Kate Pickert, for their exhaustive reporting behind all of these pictures and the remarkable photo editors at TIME who were so integral to the success of this project.

Looking back at this entire process, the most memorable moment for me was when I wrote to the great LIFE photo editor, Mr. John Loengard asking him for his advice. I sent him the provisional list, and he called us out straight away: “I take the word ‘influential” seriously,” he said. Following that, he sent me a dizzying array of images that we had missed from our list. He finished the email by saying: “to quote Churchill, ‘Does the pudding really have a theme yet?’” Mr. Loengard’s voice, like all great editors, continues to ring through our ears to keep us on track. Like so many of the great photographers that he influenced, we were lucky to be blessed by his knowledge for this project.

Visit TIME.com/100Photos and buy the book.

Kira Pollack is the Director of Photography and Visual Enterprise at TIME and executive producer of TIME’s documentary film unit, Red Border Films. 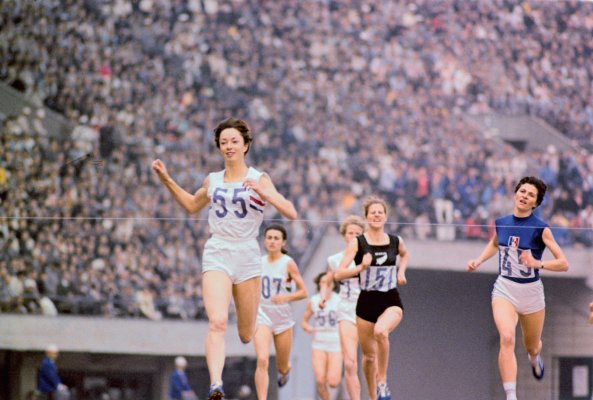 Sir Patrick Stewart: The Photo That Influenced Me Most
Next Up: Editor's Pick