It’s an exciting day for the Trump family. And like millions of Americans, members of Republican nominee Donald Trump‘s family visited their respective polling places to cast their ballots for their father, husband or father-in-law. But two photos from their outings on Election Day caused a stir.

Photographers at the yellow-walled high school gymnasium where Trump voted, PS-59 in New York, caught the presidential nominee in an awkward scene that appears to show him looking at the ballot box that his wife, Melania, is standing at as she looks down to fill out her ballot. Footage from this scene aired on CNN.

“Trust but verify,” joked a BuzzFeed reporter on Twitter who shared a screenshot. A slew of other tweets mused that Melania was voting for Clinton.

Photographers at the 53rd Street Library also caught Eric Trump, one of Trump’s children, in a similar position as his wife, Lara, voted in her booth. Afterward, Eric Trump, in a bid to celebrate the day, tweeted and deleted a ballot box selfie showing his vote for his father. Selfies at the ballot box are not allowed in New York. 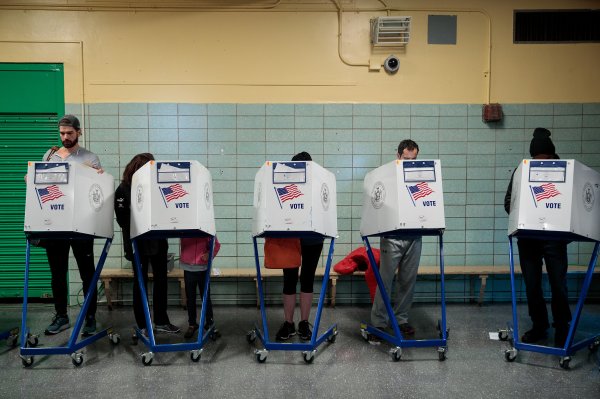