Democratic presidential candidate Hillary Clinton waves to the crowd as she takes the stage to speak during the fourth day session of the Democratic National Convention in Philadelphia on July 28, 2016.
Andrew Harnik—AP
By Olivia B. Waxman

Americans who have already made it to the polls this Tuesday may have seen Hillary Clinton supporters dressed in white — or at the very least, seen photos of these women on their Facebook and Twitter feeds. Clinton has also made headlines this campaign season with white outfits of her own.

The reasoning behind that sartorial choice has been thoroughly explored: those white outfits are a nod to the women who sported that color—or lack thereof—while fighting for women’s right to vote at the beginning of the 20th century.

But why were those women wearing white in the first place?

According to the Congressional Union for Woman Suffrage‘s statement of purpose, there were deep reasons behind the choice of colors to represent the National Woman’s Party: “Purple is the color of loyalty, constancy to purpose, unswerving steadfastness to a cause. White, the emblem of purity, symbolizes the quality of our purpose; and gold, the color of light and life, is as the torch that guides our purpose, pure and unswerving.” Across the pond, the British suffrage movement believed white stood for “purity in public and private life,” purple for the “instinct of freedom and dignity,” and green “for hope,” as Emmeline Pethick Lawrence, a representative of the Women’s Social and Political Union in Britain, told Kenneth Florey for a 2013 study of memorabilia from the suffrage movement.

But the idea of women wearing white to make a political statement is actually older than that.

Purity also happens to be the significance of the white ribbon bow sported by the Women’s Christian Temperance Union (WCTU), which was one of the largest women’s organizations of the late 19th century. The temperance movement against alcohol drew many women supporters “because alcohol consumption often increased the frequency and severity of domestic violence and abuse,” according to the National Women’s History Museum. “In addition, men would sometimes squander limited household finances on alcohol.”

Many of women who were part of that temperance movement parlayed that organization into the women’s suffrage movement. In fact, temperance was so much more of a hot-button image that the first woman in the U.S. Congress got there in part by associating herself with the anti-alcohol forces.

When WCTU was founded in 1874, the country was going through an economic depression, which threatened to dampen activism. Therefore, “leaders in the national woman suffrage movement relied on members of local branches of the WCTU to sponsor suffrage speakers and convey information about the suffrage movement to their communities,” as Kathryn Kish Sklar, founding director of the Center for the Historical Study of Women and Gender at Binghamton University, has explained for PBS.

Hence, it was natural for the suffrage movement and the temperance movement to share an association with the same color.

Later in the 20th century, women wore white to march for the Equal Rights Amendment (which ultimately failed). Former New York congresswoman Geraldine Ferraro also wore white when she became the first vice-presidential nominee of a major party at the 1984 Democratic National Convention. And in July, Hillary Clinton wore a white pantsuit when she made history by accepting the Democratic nomination at the party’s convention in Philadelphia, becoming the first female presidential nominee for a major American political party. 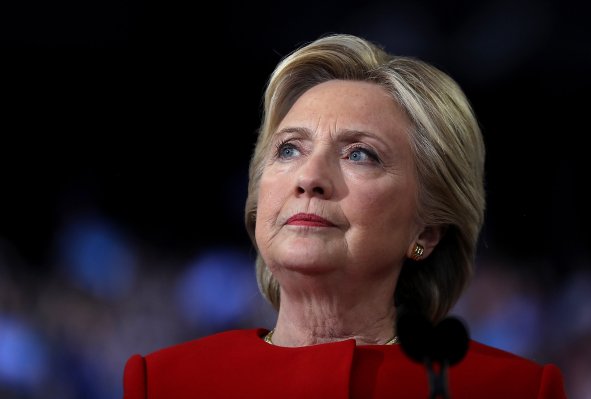 Why a Woman President Won't Mean Women Won
Next Up: Editor's Pick