Madonna Put on a Surprise Concert for Hillary Clinton

An audience in New York’s Washington Square Park was treated to a live performance of Madonna’s greatest hits on Monday evening, as the superstar singer put on a surprise show in support of Democratic presidential candidate Hillary Clinton.

Speaking to the impromptu crowd that had gathered in the center of New York City, Madonna said “This is a concert that is about unifying us,” referring to Clinton as “a president that is going to keep America the great country that it is.”

The singer urged the audience to “elect a president that does not discriminate against women, against the LGBT community, against people of colour and that does not want to build a wall around our country and separate us from the rest of the world,” the Guardian reports.

Madonna performed some of her greatest hits including Like A Prayer and Express Yourself during the 20-minute concert, as well as a cover of the classic John Lennon ballad Imagine, the New York Daily News reports. She was accompanied by her son David on the guitar, as the pair wore hats emblazoned with the American flag’s stars and stripes.

Despite the short notice, word of the concert quickly spread throughout the surrounding areas, with Madonna herself tweeting the invite “Meet me in Washington Square Park at 7:30. Let’s go hard for Hillary Clinton.” The singer officially endorsed Clinton in an Instagram post in September. 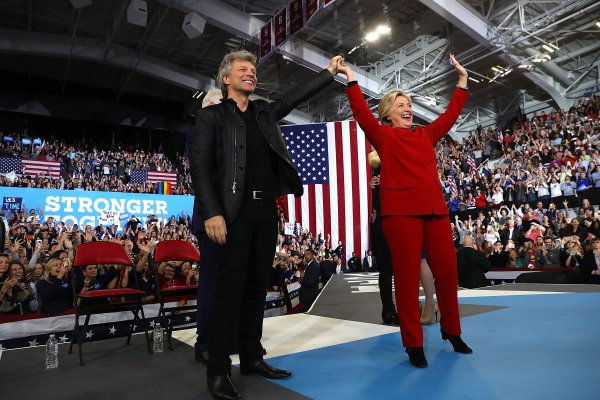