To hear Donald Trump tell it, Tuesday’s results will either save or ruin the country. Americans will emerge from Election Day ascendant with a strong new leader who heeds their cries, or they will plunge into a dystopian future of hopelessness and violence.

“It’s our last chance,” Trump said in early November in Pennsylvania. But here’s what Trump actually says will happen if he loses to Hillary Clinton on Nov. 8.

First, he has said the nation could face a messy fight around the election results themselves. Trump declined to promise at the final presidential debate that he would accept the election results regardless of outcome. “I’ll keep you in suspense,” he said. The following day at a rally in Ohio, he elaborated: “I will totally accept the results of this great and historic presidential election — if I win,” he said.

So in the event of a Trump loss, he’s hinted at challenging the results or calling for a re-count similar to 2000. “If Al Gore or George Bush had agreed three weeks before the election and waived their right to a challenge or a re-count, there would be no Supreme Court case,” Trump argued in Ohio. “In effect, I’m being asked to waive centuries of legal precedent designed to protect the voters.” (TIME’s David Von Drehle explains here why Trump’s comparison to the 2000 election doesn’t hold up.)

Trump surrogate Roger Stone has gone further, saying there will be a “bloodbath” if Democrats “steal” the election.

But if Trump either doesn’t challenge the results or does and is still found to be the loser, he has said that Hillary Clinton would be tried for crimes in office and impeached. Two nights before the election, he said Clinton’s time in office would be “likely to conclude in a criminal trial.” On Nov. 2, he said, “If Hillary Clinton were to be elected, it would create an unprecedented and protracted constitutional crisis,” and raised the specter of impeachment: “Haven’t we just been through a lot with the Clintons?” he said. “Remember when [Bill Clinton] was impeached for lying? … Didn’t we just go through this?”

While President Clinton is being impeached and tried for crimes, Trump says outside Washington, the country will be beset by violence at the hands of immigrants and refugees. He often recites victims of violent crimes committed by undocumented immigrants at his rallies — Earl Olander, “brutally beaten and left to bleed to death in his home. The perpetrators were illegal immigrants with criminal records a mile long but who did not meet the Obama Administration’s priorities for removal”; Marilyn Pharis, “sexually assaulted and beaten to death with a hammer. Her killer had been arrested on multiple occasions but was never deported”; and many others.

“This is a crime wave that never ends. I can tell you it’s thousands of cases like this,” Trump said at the end of October, pledging to build a border wall. “There goes your country, folks,” he said the day before the election, saying Clinton wants “open borders.”

“Hillary Clinton’s plan will import generations of terrorism, extremism and radicalism into your schools and throughout your communities,” he said in November, pledging to end the Syrian refugee program.

As violence pours over the borders and the nation’s President is embroiled in political scandal and criminal trials, Trump predicts an Orwellian system in which his supporters are controlled by the government and manipulated with biased media reports.

“When the people who control the political power in our society can rig investigations, can rig polls — you see these phony polls — and rig the media, they can wield absolute power over your life, your economy and your country, and benefit big time by it,” he said at the end of October.

It’s a dark vision, and one that Trump has been uniquely specific in promoting. But he’s not the only candidate framing tomorrow’s choice in dire terms.

“This election is a moment of reckoning,” Clinton told voters Sunday night, around the same time that Trump told his supporters that he’s their last chance. Monday morning, in one of Trump’s final pitches to voters, he said, “I think and hope it will be the most important vote you will ever cast.” 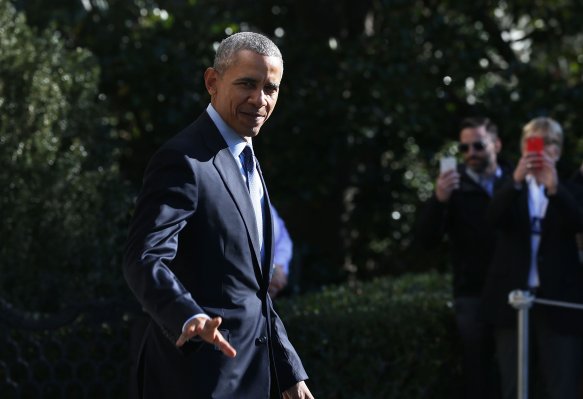 President Obama Mocks Donald Trump for Not Being Allowed to Tweet
Next Up: Editor's Pick