“The Adversary" was a fitting title for this week's episode of HBO's Westworld. Filled with all kinds of battles and throwdowns — including a very action-movie style Old West massacre — the humans and the artificially intelligent hosts find themselves at odds with another and the park. But a few of the characters won small victories that seemed to click in the show's own code, a mysterious world where simply fighting back can be a triumph of its own. All of these fights moved the story forward, resulting in eight key reveals for the series.

Maeve wants out, and she's gaming the system like only a madam could. Now she knows how to beam herself back to the operating table where she recruits Felix in her agenda to ditch Mariposa for freedom. He lectures her about how she’s a mind-controlled tourist ride who has absolutely no free will: “I was born, you were made." But it’s a distinction Maeve doesn’t quite accept, and with the touch of her hand, she convinces him to show her “how the sausage is made” in one of the show’s most eerily beautiful scenes yet.

Downstairs, it’s Felix and Maeve vs. Sylvester because Sylvester isn’t having any of Felix’s Maeve obsession, and he threatens to tell Quality Assurance. Luckily, Sylvester changes his “don’t humanize the robots tune” after she threatens to gut him like a fish.

Maeve’s not exactly a fully conscious robot rebel now, but she's the most powerful one yet. When Felix shows her proof that everything she says is part of her makeup, he loses her like she’s a browser with too many Black Friday deal tabs open. But here’s what’s working in her favor:

These are just the sort of developments that are going to be awful for the saloon’s TripAdvisor reviews.

Welcome to Cornwall, Dr. Ford’s secret happy place featuring his drunk dad. Bernard finds the woodsy cottage that Dr. Ford’s been visiting so that he can relive the summer family vacation of yesteryear in a suspiciously off-limits section. In the little house, he finds first generation “survivors of the wreck” who only respond to Ford. It’s here that Dr. Ford can relive the old days — and Ford reveals that Arnold essentially created these bot versions of his family, which he then fine-tuned.

It’s Dr. Ford vs. his Daddy Issues, and the park’s founder wants to play catch with his mini-me who later confesses that he killed the dog because a voice told him to. Based on Dr. Ford’s explanation of Arnold’s obsession with the bicameral mind theory, it’s logical. Arnold’s involved somehow. The fact that Dr. Ford is possibly alive in child bot form is another development that possibly fuels theories that the show is playing with different timelines. 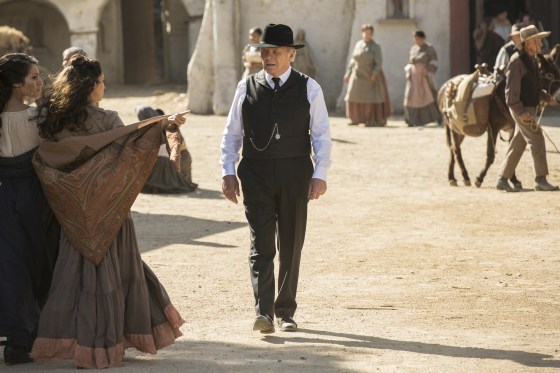 Earlier, when Dr. Ford rolls through Lawrence’s town in a swaggy black hat he bought at the evil genius souvenir shop, he seems to be on a reconnaissance mission. Sinister music and a bunch of technicians accompany him, and they ask him if they should decommission hosts. He opts to leave things as they are, and sticks around in his period costume, which brings us to yet another representation of the maze. This time, it’s carved into the table under the domino blocks. Back at the office, Dr. Ford does some rearranging of the model of the same town and flips through books featuring illustrations of total horse girl Dolores and the maze.

She digs up even more dirt that we don’t get to hear because Bernard ghosts her and we’re entitled to nothing. Elsie theorizes this is the bicameral system at work: broadcasting commands through voices to the bots. While Elsie’s investigating in an abandoned theater, she gets captured, so she won't be getting bar perks like she thought. She’s “on leave” so the only trustworthy person really explaining what’s going on is gone.

Bernard has been at Westworld for a very long time

He tells Elsie this and uses an old school computer to find Dr. Ford’s undetected hosts thanks to the fact their whereabouts are timestamped. Both suspect Arnold had a hand in this. 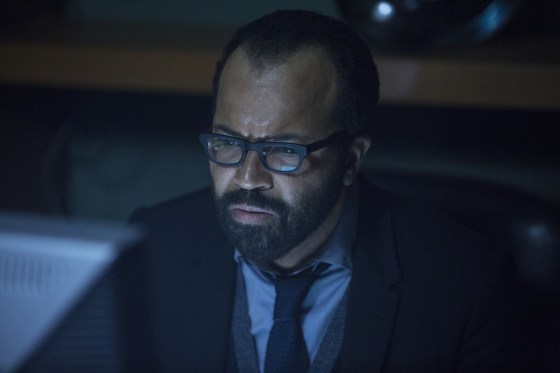 Just as an enemy is about to scorch Teddy with a piping hot poker, he takes a pretty long trip down memory lane to that time he may or may not have gone on a murdering spree with Wyatt. Yes, Mr. Aw-Shucks Always-Do-the-Right-Thing is a killing machine who uses a Gatling gun to annihilate a countless number of soldiers who view him as a traitor. Teddy says he’s “making peace with past indiscretions,” but as he explains to Dolores, “some reckoning” is #1 on his to-do list. Also fun fact: when killings weren’t enough for Wyatt, he followed the next logical step in the soldier playbook and started exacting cruel punishments on people.

Legend has it, a man built the maze

Everything about Teddy’s bromance with the Man in Black is complicated, which brings us to the matter of the maze. While they’re galloping through a cemetery, the Man in Black asks Teddy for his feelings on the scalp. Teddy: there’s an old native myth about a conquering man who built a puzzle only he can crack around his house, and that it's the "sum of a man's life."

In the name of objectivity, Theresa breaks it off with Bernard. She tells Bernard that Dr. Ford knows about them, and that their relationship could screw with the checks and balances on their respective teams. Great move. Because if Westworld is one thing, it’s ethical, so late-night sessions are off the table now. Bernard insists that Dr. Ford isn’t the problem, and he’s been complaining in the last effective ways possible. As usual, no one really listens to him.

A board executive knows the robots can go off-script

Everything is still terrible for Lee. Ford’s trampling all over his storylines, and punching continuity holes all over the place. In protest, Lee has been sunning himself at a rooftop pool party version of Ferris Bueller’s Day Off where Theresa busts him. He tells his pool party crush (board executive member) that the robots can go off-script and she acts surprised to hear this.

"The Gunslinger," from the original 1973 film is still in storage, we find out, and if he were to come alive, he'd likely be out for revenge.

As for Dolores and William? What are they up to? Who are they mad at right now? Are they crossing the host-guest divide in a different timeline atop a host horse built for two? Even though Dolores appeared in illustration form in Dr. Ford's office, she wasn't in this episode.