The FBI Just Absolved Hillary Clinton. But That Doesn’t Undo the Damage

That sound you heard Sunday afternoon? A deep sigh of relief from inside Hillary Clinton’s campaign headquarters in Brooklyn, not bubbly corks popping or confetti cannons exploding.

FBI director James Comey told members of Congress on Sunday that his agency was not changing its summer view that Clinton had been careless but not criminal in using a private email server. That conclusion seemed in doubt when FBI agents said on Oct. 28 that agents had discovered new emails that they wanted to review.

For the past 10 days, the cloud of a renewed investigation hung over Clinton and her campaign as FBI agents scoured yet more emails looking at whether Clinton had committed a crime via BlackBerry. The FBI decided, yet again, that she had not. “Based on our review, we have not changed our conclusions that we expressed in July with respect to Secretary Clinton,” Comey wrote.

But damage was done by Comey’s unprecedented disclosure that they were even going back to the matter in the first place. Clinton’s poll numbers in many states sank, and some of her supporters found themselves again questioning Clinton’s honesty. The “October surprise” that fizzled may have had a lasting effect on the election: voters in many states were already casting early ballots informed by little more than speculation at that point.

Press secretary Brian Fallon said the campaign was always confident this would be the conclusion. Aboard the Clinton campaign plane, communications director Jennifer Palmieri told reporters that nothing has changed since July and “this matter is resolved.”

There were reasons to doubt both statements. Republicans were quick to say Comey’s verdict was suspect — after days of praising him as an impartial and steadfast investigator. “He’s mishandled this investigation from the beginning and this proved it yet again,” Donald Trump’s campaign manager, Kellyanne Conway, told MSNBC.

House Speaker Paul Ryan released a statement that began “regardless of this decision,” signaling that Republicans would not take this as the final word. Trump had yet to weigh in directly, but it is tough to imagine he would rethink his nickname for his opponent: Crooked Hillary.

The emails came back to light on Oct. 28, when the FBI notified Congress that, in the court of investigating disgraced former Congressman Anthony Weiner, they may have found other Clinton emails. Weiner’s estranged wife, Huma Abedin, is a close Clinton adviser, and some of the messages between the two women could be on Weiner’s devices.

In Brooklyn, Clinton aides found themselves again in a funk. They thought they had gotten past the worst of the drama. Clinton testifying about the deadly attack on a U.S. outpost in Benghazi, Libya. The FBI investigation into her email practices. Her pneumonia diagnosis in September. They seemed on a clear glide path to the presidency after three spectacular debates with Trump, and their political machine was expertly tuned.

Then this: yet another sideshow scandal that Clinton’s detractors could point to as further evidence of her dodgy dealings and shady record. The initial reports fueled the fevered imaginations of Trump’s supporters who are convinced that Clinton is, in fact, a criminal mastermind. “Lock her up” is a favorite chant at Trump’s rallies. One person at a Trump rally in New Hampshire on Friday suggested Clinton should be executed. “Hillary for Prison” signs are part of campaign rallies.

Campaigning in Michigan, Trump sought to sew seeds of doubt and nurture a sense of being wronged. “Hillary Clinton is guilty, she knows it, the FBI knows it, the people know it, and now it is up to the American people to deliver justice at the ballot box on November 8,” he said.

Trump also said he doubted the FBI had even reviewed the emails. “You can’t review 650,000 new emails in eight days. You can’t do it, folks,” said Trump, who does not use a computer.

He then returned to his favorite screed about his rival: “Hillary Clinton is the most corrupt person ever to seek the office of the presidency of the United States … Right now she is being protected by a rigged system.”

The comments were a far cry from his reaction after he learned the FBI was again looking at the emails just a little more than a week ago. “I have great respect for the fact that the FBI and the Department of Justice are now willing to have the courage to right the horrible mistake that they made,” Trump said in the same campaign venue where Clinton was going to end her Sunday. “This was a grave miscarriage of justice that the American people fully understood. And it is everybody’s hope that it is to be corrected.” The facts didn’t support his hopes. 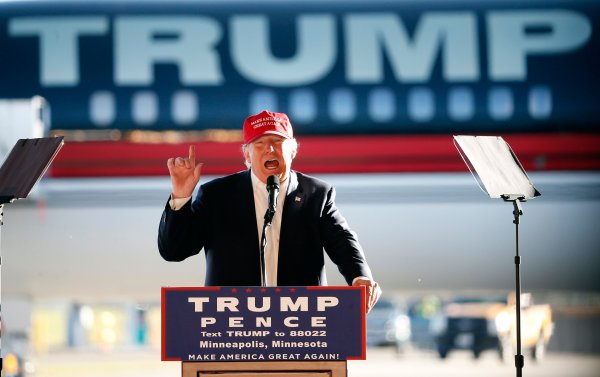