The Trend Miller and Budweiser May Want to Start Worrying About

Are you tempted to taste Hell? In the mood for a Hooker? Or perhaps it’s time to try Zevia? The latter may sound like a mood-enhancing drug, but it’s not. Neither are the others—not exactly, anyway. They’re all unfamiliar beverage brands, a few of the many increasingly showing up on the menus of casinos, airlines, and pro baseball stadiums.

Craft beers and indie soft drink brands have been mainstays at local restaurants, bars, and markets for years. Heck, craft beer is so mainstream that even Costco and Walmart are now known to stock a few interesting selections. Lately, unfamiliar labels are more likely to be seen even in mass-market hubs and attractions that traditionally have been dominated by the world’s biggest brands, often thanks to exclusive partnerships.

Airlines
In February, Minnesota-based Sun Country Airlines announced it was getting Surly. Beers from Minnesota neighbor Surly Brewing Company with names like Hell, Furious, and Bender are now being sold in 16-ounce cans on Sun Country flights.

As NBC beer blogger Jim Galligan and, more recently, the Associated Press, have reported, Sun Country is one of several airlines to offer passengers beer options beyond the usual Miller and Budweiser products (which, it should be noted, Sun Country still sells). Shortly before Sun Country’s craft beer infusion, Southwest Airlines introduced a partnership with New Belgium Brewing, the Colorado-based brewer known for Fat Tire Amber Ale, among many other beers. Like all alcoholic beverages on Southwest, a can of Fat Tire—airlines almost always stick with cans, or plastic bottles, to avoid broken glass on the plane—will run an airline customer $5.

Samuel Adams, the largest of all craft brewers, has been available on JetBlue since last summer, Frontier Airlines launched a big craft beer initiative in 2012, and Virgin America brought beers from 21st Amendment Brewery on board in 2009, and welcomed Anchor Steam beer a few years later. Best of all, Horizon and Alaska Airlines recently expanded their craft beer options to include brands such as Alaska’s own Silver Gulch, and, in almost unheard-of fashion nowadays, the carriers offer beer and other alcoholic beverages on a complimentary basis on longer flights.

Casinos and Cruise Ships
Realizing that an impressive and unusual selection of beer and wine is not only good for business but practically necessary for the fine dining crowd today, casinos and bars along the Vegas strip have been ushering in craft beer brands in a hurry. In Connecticut, the Mohegan Sun resort and casino just introduced the Hooker Brewing Test Kitchen, which is pretty much what it sounds like: a spot for Bloomfield-based Hooker Brewing to make and sell experimental small-batch brews.

Cruise companies are increasingly playing up their craft beer selections as amenities as well: Celebrity Cruises, for instance, notes “up to 50 international craft beers” offered one ship’s club. There are also beer-themed cruises focused on small and unusual local brews from operators such as Crystal Cruises and Un-Cruise Adventures.

Baseball Stadiums
Craft brews are nothing new at pro and minor league ballparks. Petco Park, home of the San Diego Padres, boasts perhaps the best beer selection in baseball, with no fewer than 14 local craft brews sold during games. But there are a few caveats of note: These craft brews are seriously pricey (over $15 a pop in some cases), and sometimes these craft beers aren’t truly craft brews. For instance, last year, there was some uproar in the craft beer community regarding Yankee Stadium’s “Craft Beer Destination” concession stand. All of the brews sold there just so happened to be MillerCoors products, though they featured indie-sounding “crafty” names such as Blue Moon and Batch 19.

If fans find it strange to see less Miller and Bud sold at the ballpark, then it might be downright surreal for soft drink giants such as Pepsi and Coke to be replaced, even to a small degree. Yet this season at the Oakland Coliseum, the old official soft drink sponsor of the A’s (Pepsi) is out and a new one is being ushered in: Zevia, a naturally-sweetened, zero-calorie soda sold in flavors like cola, ginger ale, and black cherry. Zevia will be sold in bottles at all concessions stands in the stadium, and while Pepsi drinks will still be available for purchase, they’ll only be offered as fountain soda (not in bottles).

One branding consultant told USA Today that the ball club may have a hard time convincing fans that Zevia is the soft drink for them. “It sounds like a car made behind the Iron Curtain 50 years ago,” he said. 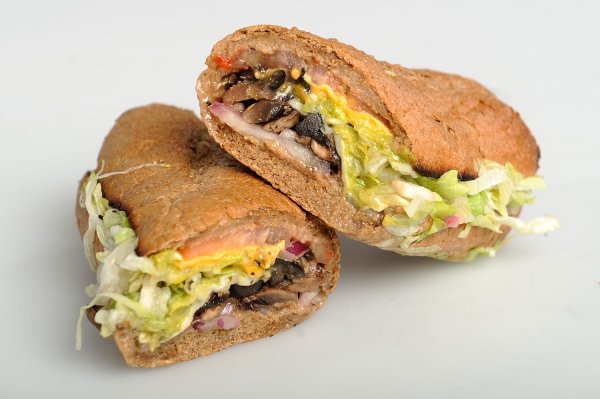 Quiznos Gets Toasted: Sub Chain Files for Chapter 11
Next Up: Editor's Pick