10 TV Moments That Mattered in the 2016 Election

This election—perhaps more than any other—has been one conducted on television, from the endless procession of debates at its start to the final push of “closing argument” ads currently airing. And yet, if everything is a TV moment, nothing matters: Little on the medium that (apocryphally) elected Kennedy over Nixon seemed to alter the trajectory of the race. Much of what was on TV, from coverage of Trump’s rallies to the both-sides equivocations of Saturday Night Live to relentless round-tabling on cable news, came to feel so oppressively omnipresent as to be easily dismissed.

These moments, though, were different. Some improved Clinton’s prospects, and some improved Trump’s; a few did the more complicated work of reframing how we see a political issue, or—crucially for a medium that’s grown yet more entwined with the political process—how we see what television can do.

Brianna Keilar’s interview of Michael Cohen, August 17, 2016: Both CNN anchor Keilar and top Trump attorney Cohen enjoyed life at the center of one of the summer’s defining memes, as Cohen refused to even acknowledge his candidate’s sinking fortunes, and Keilar seemed relatably befuddled by his trutherism. “Says who?” Cohen repeatedly asked in response to being told the Trump campaign was down. Keilar’s reply, “Polls—most of them… all of them,” got a lengthy silence, then another “Says who?”

Keilar deserved kudos for her management of the moment, when so many other anchors might have been flummoxed and defended their premises unnecessarily. But the clip’s appeal here transcends its most viral qualities (palpable awkwardness; an anchor speaking with an unaffected candor unfamiliar on cable news). It also managed to crystallize, before Trump began questioning the election’s legitimacy, exactly what the Trump campaign’s response to falling fortunes would be. Trump had just suffered the two worst weeks of his campaign and shaken up his campaign staff—and yet one of his surrogates, on live TV, wouldn’t acknowledge that fact. The Keilar/Cohen interaction was a high-voltage television moment that could have gone anywhere—and in the months to come, it proved more relevant than anyone might have guessed.

Michelle Obama’s speech in New Hampshire, October 13, 2016: The First Lady had built a reputation as one of the Democratic Party’s most effective surrogates over time. She ratified that status with a speech at the Democratic National Convention over the summer, in which she dropped a campaign mission statement (“When they go low, we go high”) more stickily effective than anything Clinton herself managed. But a sitting First Lady speaking at a political convention, however effectively, is to be expected. Less so is a sitting First Lady speaking for half an hour, moved almost to the point of tears, over a political opponent’s rhetoric. That Obama made her position on Trump’s treatment of women clear without ever once using Trump’s name was the most meaningful proof yet of her political gifts; that it was carried live on cable news is proof of the power of a surrogate who carefully chooses her moments to speak.

Jimmy Fallon ruffles Donald Trump’s hair, September 15, 2016: There were two simultaneous trends in late-night comedy throughout the campaign, each seemingly in opposition to the other: Political comedians, led by Seth Meyers and Samantha Bee, were more emboldened than ever to speak frankly and angrily about the Trump campaign in particular, while Fallon and James Corden danced faster and faster to deny anything was out of the ordinary at all. (Stephen Colbert, as has so often been the case in his tenure at CBS, was caught in between.) Never was the divide in comic approaches so stark as in Fallon’s painful softball interview of Trump, in which Fallon asked Trump non-questions about fast food and his business background before ruffling his hair. The moment made many anti-Trump partisans more angry than would have a sympathetic news interview on cable news, and understandably so: Just as on his same-day appearance on Dr. Oz, Trump was able to use the soft landing of an “apolitical” talk show to soften and normalize his image in a way that felt very political indeed.

Megyn Kelly vs. Newt Gingrich, October 25, 2016: The Fox News host’s segment with the former Speaker of the House descended into surrealism, as Gingrich accused his interlocutor of being “obsessed with sex” for having covered Trump’s Access Hollywood tapes. Kelly was dismissive of Gingrich’s attacks on her show and character, growing visibly frustrated with the politician as she said “As a media story—we don’t get to say that ten women are lying! We have to cover that story, sir.” It’s in the “sir” (which comes to sound like an epithet), as much as in the sentence that came before, that Kelly comes to stand in for many women who had grown frustrated of the tone of the election. That the segment presents Kelly as the complicated political figure she actually is—she defends her show’s aggressive coverage of Clinton scandals to Gingrich—rather than the “secret liberal” her fans on the left imagine makes it all the more effective.

Megyn Kelly’s debate question to Trump, August 6, 2015: The most impactful debate moment came very early, when Kelly posed to Trump a question about his treatment of women. The most obvious aftershocks of the moment were widely covered as they transpired: Trump’s long series of attacks on Kelly, whom he claimed had “blood coming out of her wherever” during the debate, helped define Trump’s adversarial strategy. But Trump’s rhetorical strategy during the debate—deflecting Kelly’s question with “Only Rosie O’Donnell,” a joke the audience in Cleveland’s Quicken Loans Arena ate up, before decrying political correctness—was rewarded, until, in his debates against Clinton, it wasn’t. Had Trump been a less practiced TV star or less conditioned to respond to fans’ applause with more of the same, he might have been better able to pivot away from a strategy that, briefly, made Kelly a deeply unpopular figure among the Republican base.

Jeffrey Lord at the center of a pile-on, June 7, 2016: Trump surrogate Jeffrey Lord had a difficult 2016—or perhaps not! It all depends on quite how embarrassed one thinks Lord is by his appearances on CNN, in which he seemed perpetually behind the eight-ball. Conservative and liberal panelists alike on CNN’s telecast jumped in to correct Lord’s strange defense of Trump’s attacks on Judge Gonzalo Curiel. It was an interesting proxy attack of sorts: Respect for the Republican Party’s nominee, as well as the fact that like Clinton he rarely granted substantial access to TV interviewers, meant that Trump himself would likely never come under this sort of attack on TV. His surrogate, though, was fair game—and Lord appeared untroubled about his status in the conversation, that of sacrificial lamb to make sure that, no matter how ineptly, points unquestionably defensive of Trump got airing.

Ana Navarro on the offensive, October 8, 2016: Navarro, a Republican strategist, had an election as good as Lord’s was bad, though she seemed not to enjoy it a bit. The CNN commentator’s breakout moment may have come in the wake of the revelations about Donald Trump’s comments about women’s genitals on the Access Hollywood tape; asked by a co-panelist not to repeat Trump’s five-letter vulgarity to describe the female anatomy, Navarro blew up, asking why it was out-of-bounds for her if the Republican candidate could use it. The faces of her co-panelists say it all—this moment had gone substantially beyond the cutely chummy give-and-take of a typical CNN politics segment. It’s a stylistic contrast to Megyn Kelly’s slower burn against Gingrich, but then, Navarro is not a journalist by trade; what the clip shared with Kelly’s Gingrich moment was the sense of a dam breaking. Women, even those who were not Clinton supporters, had been pushed to the limit by the tone of the campaign, and responded, whatever the tone, with new rhetorical heights.

Clinton apologizes for her emails, September 8, 2015: The candidate had a vexed time explaining her emails—and, at least early in the campaign, an even harder time apologizing for them. In an interview with NBC News’s Andrea Mitchell, Clinton said she was “sorry this has been confusing to people and has raised a lot of questions, but there are answers to all these questions.” Mere days later, Clinton issued a more full-throated apology, telling ABC News anchor David Muir “even though it was allowed, I should have used two accounts. […] That was a mistake. I’m sorry about that. I take responsibility.” Clinton seemed uncomfortable discussing the matter in both instances. Her halting discomfort, and the stop-and-start nature of a conditional apology giving way to a (somewhat) more deeply felt one painted a picture of a candidate whose desire for privacy extended towards a press for whom she had no particular affinity, and augured her future difficulty in addressing the emails through the campaign’s final stretch.

Clinton at Sept. 11 memorial, September 11, 2016: Video of the Democratic nominee appearing to collapse before entering a car showed, ultimately, nothing more serious than a person suffering from pneumonia. But the video gained currency even after Clinton’s diagnosis was revealed in part thanks to Clinton’s own protectedness from the press. In a news climate where truly unguarded moments from the candidate had grown vanishingly rare, and subject to endless repetition in conjunction with a similar video of a “coughing fit” on the stump, the footage took on a nearly-mythic quality—as though it were the missing link in a conspiracy Clinton’s hiddenness did little to dispel.

Trump’s birther announcement, September 16, 2016: Trump’s use of “earned media”—the press’s eagerness to cover whatever he did—reached its high point, or its low point, in this press conference, at which he showcased a new D.C. hotel property at length before, finally, dismissing his own role in the “birther” rumors about President Barack Obama in a few short sentences. Leaving aside his claim that “Hillary Clinton and her campaign of 2008 started the birther movement,” Trump’s stringing the media along for a hotel showcase and a staged event about veteran support of the candidate before, finally, delivering the news he’d promised seemed to mark an inflection point in campaign coverage, with CNN’s Jake Tapper among those with criticism for Trump’s stunty manner of getting attention. It seemed to point a way forward: Perhaps the next candidate like Trump will see their rallies covered with marginally less wall-to-wall avidity. It was a television moment that didn’t really alter Trump’s trajectory—his base likely didn’t care, and the birther issue faded from view. But it may just have affected TV itself. 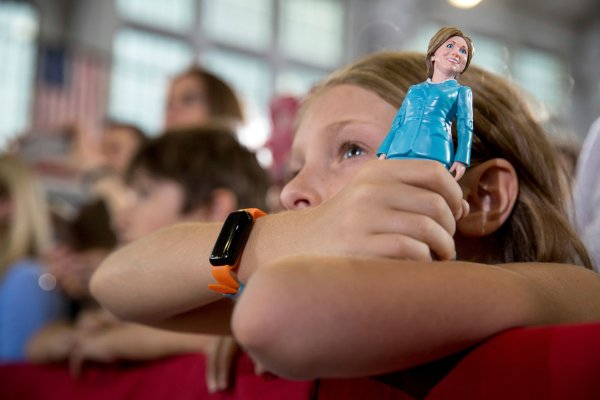