A massive protest in Hong Kong turned violent Sunday night when demonstrators attempted to storm a police barricade outside the Chinese government’s headquarters, prompting officers to retaliate with pepper spray and batons.

The protest began peacefully earlier in the day: with thousands of people marching across town to decry Beijing’s controversial decision this week to effectively decide the fate of two radical lawmakers who call for the semiautonomous territory’s outright independence from China. The maverick legislators, 25-year-old Yau Wai-ching and 30-year-old Sixtus “Baggio” Leung, who came to political prominence in the wake of the 2014 pro-democracy protests, have been the subject of scandal since they gave their oaths of office on Oct. 12. The pair refused to pledge allegiance to Hong Kong’s constitution, the Basic Law, and instead swore fealty to the “Hong Kong Nation” — the oath required them to swear allegiance to the Hong Kong Special Administrative Region of the People’s Republic of China.

Read More: China Will Intervene in the Case of Hong Kong’s Pro-Independence Lawmakers

On Friday, the Hong Kong government announced that Beijing would step in and interpret the Basic Law accordingly to decide if Yau and Leung would still be able to take their seats. The issue is currently being decided in a local court, but at a meeting on Sunday with Hong Kong’s representatives to Beijing, Zhang Xiaoming, mainland China’s most senior official in Hong Kong, said Beijing would “absolutely” not permit pro-independence politicians to serve as lawmakers, according to the South China Morning Post.

Beijing’s actions in the matter have widely been seen as a violation of Hong Kong’s constitutional principle known as “one country, two systems,” enacted in 1997 when the British returned the former colony to China.

Under this system, Hong Kongers maintain the right to freedom of speech and protest, freedoms that citizens of mainland China do not enjoy. On Sunday, as many as 10,000 people marched nearly 2.5 miles from the district of Wan Chai to the Liaison Office of the Central People’s Government, Beijing’s nerve center in the territory. The demonstrators were civil but spirited, speaking out against what they say is Chinese encroachment in Hong Kong and a local government that has failed to defend their constitutional rights.

“The [Chinese government] stepped over the line. It’s a blatant violation of the Basic Law to take the initiative to interpret it,” 25-year-old Francis Chung, who works in the financial sector, tells TIME. “I’m rather pessimistic regarding Hong Kong’s way forward, but I’ll do what I can, come out and march.”

When the crowd approached the Liaison Office, however, they faced a police barricade. Prominent activist figures like 20-year-old Joshua Wong, a figurehead of the 2014 pro-democracy protests known as the Umbrella Revolution, gave rousing speeches.

“It’s time for us to show our disagreement with the communist regime’s suppression of Hong Kong’s rule of law and judicial independence,” Wong tells TIME. “The number of participants of today’s protest to the Liaison Office is the highest in three years. It shows the anger of Hong Kongers with the suppression.”

It is unclear what or who prompted some members of the crowd to storm the police barricade shortly after 8 p.m. local time. In the preceding hour, officers unfurled banners urging the protesters to stop charging or they would use force. After beating back demonstrators with their batons, the police used pepper spray. Still, the crowd continued to push against the metal grate, unfurling umbrellas — an icon of the Umbrella Revolution — to protect themselves.

The scuffle was promptly subdued, but as of 9:15 p.m. demonstrators continued to occupy the streets around the Liaison Office.

The protest marked the crescendo of months of simmering political tensions in Hong Kong. Hostility towards what many see as China’s impingement on the city has mounted since late last year, when five local booksellers, who sold works critical of mainland leaders, disappeared and resurfaced months later in the custody of mainland police. The unease precipitated an unprecedented movement demanding Hong Kong’s independence from China — a call deemed seditious by mainland authorities and also the Hong Kong government, seen by many as Beijing’s proxy power. Several pro-independence candidates were barred from running in the Sept. 4 Legislative Council elections.

When asked in an interview with TIME on Saturday — less than 24 hours before Sunday’s clashes — if she believed the popular unrest in Hong Kong would grow violent, and if she would join in if it did, Yau replied in the affirmative.

“I’m the people’s lawmaker, and I have to give my support to them,” she said. “I’ve taken my oath to them.” 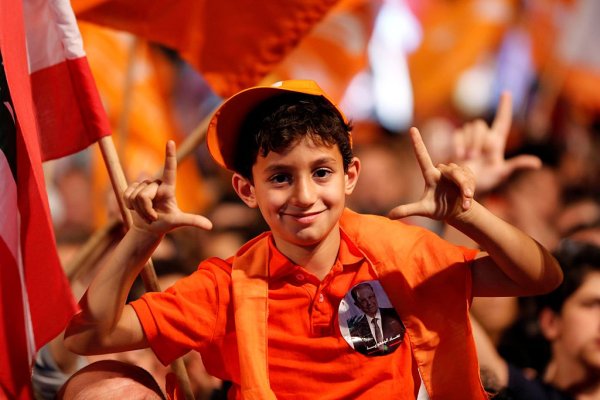 The Election Is Driving You Insane. So Here Are 5 Good News Stories From Around the World
Next Up: Editor's Pick