Hillary Clinton and Donald Trump began a final, frenetic dash as the presidential campaign entered its last weekend, with the Democratic nominee defending her lead against a late effort by her Republican opponent.

Clinton began Saturday with a flurry of visits to campaign offices, a rally in a torrential Florida downpour and a dramatic send-off at night by a sequin-wearing pop star and cannon blasts of confetti.

“We are all working our hearts out in this last sprint of the election,” she said before introducing the singer Katy Perry in Philadelphia to a crowd of 10,000. “There are still people whose doors need to be knocked on.”

Trump held a frenzied four events in two time zones in a single day. In Reno, Nevada, he was rushed off stage by Secret Service amid a mistaken threat and returned minutes later after a scuffle in the crowd. “Hillary Clinton brought death—I love you too!—and destruction,” he told the crowd, after returning to the stage.

Like whirling dervishes the two candidates flew from battleground state to battleground state, speaking until they were hoarse. It has been an aggressive and at times bitter last haul for Clinton and Trump, who will end their campaigns with as much spectacle as they began.

The two have similarly busy schedules, but they are taking markedly different approaches amid tightening poll numbers.

Clinton has mostly retreated behind a blue moat of Democratic-leaning states, delivering a positive message. Rarely mentioning Trump on Saturday, she is depending on a long and glittering roster of celebrities and surrogates in the final days, some of whom would likely draw a bigger crowd than she could: President Obama; basketball player LeBron James, musicians Beyonce, Jay-Z, Katy Perry, James Taylor, and Jon Bon Jovi; TV impresario Shonda Rhimes and actress Debra Messing.

Trump, meanwhile, is making a final attempt to expand the electoral map. He stuck scrupulously to his script, delivering four versions of his practiced stemwinder, targeting the media—”lying, thieving people”— boasting about winning states—”I think we’ll win Pennsylvania”—and criticizing the FBI—”It’s a rigged system, folks.” He traveled with a much smaller entourage, helped by a handful of the opponents he defeated in the Republican primary, including former Texas Gov. Rick Perry, New Jersey Gov. Chris Christie and Ben Carson.

The Republican nominee’s day was shaken when he was rushed off stage in Reno after a crowd mistook a sign for a gun. “No one said it would be easy for us. But we will never be stopped,” Trump said after returning.

The race has become increasingly tight in recent days. Clinton’s large lead over Trump has evaporated in the last week since FBI director James Comey said the bureau was examining additional emails that may be relevant to Clinton’s email server.

It has been deeply frustrating for top Democrats, who believe Comey improperly interfered in the race by taking the unusual step of openly discussing the FBI’s investigation. Clinton’s aides say they don’t believe Comey’s announcement hurt her, but her status in the lead has been imperiled.

National polling averages show Clinton’s lead over Trump fell from 7 points to within 2 points in the last couple weeks.

Still, Trump’s narrow path to the White House has not changed significantly. He is lagging behind Clinton in early voting. He must win Florida, North Carolina and Ohio, a number of other swing states and at least one traditional Democratic-leaning state like Wisconsin or Michigan, thanks in part to a structural advantage for Democrats in the Electoral College.

Some 40 million people have already voted, an increase over previous years. Both campaigns are carefully reading the incoming data for signs. Hispanic participation has increased significantly in Florida—a boon for Clinton—but black turnout, a key segment of the Democratic base, has decreased in North Carolina and Ohio.

There isn’t yet a clear picture for either side, but Democrats counted what appeared to be a success in early voting in Nevada, a state Clinton can afford to lose but Trump likely cannot. In heavily Hispanic Clark County around Las Vegas, 52,000 more people voted early than four years ago. “We’re pretty confident that we’re going to have really good night here on Tuesday,” said Brad Bauman, a Democratic consultant who is working in Nevada and watched the polls tighten with alarm along with other Democrats. “I feel much better now based on early vote.”

In a last attempt to turn the map to his favor, Trump has planned shotgun-style visits in traditionally blue states, including Michigan and Wisconsin, states that have gone for Democrats since the 1980s, and New Mexico, which last went for a Republican in 2004. He also planned visits to Virginia and Minnesota, where polls have consistently favored Clinton.

“Looking at Trump’s schedule versus our schedule is pretty emblematic of how we’re approaching this strategically. Trump is basically going everywhere,” campaign manager Robby Mook told reporters on Clinton’s blue-tinged 737 during a flight from Fort Lauderdale to Philadelphia. “As far as I’m concerned the more time he spends in Minnesota and Nevada the better.”

Trump’s aides had a different view, suggesting Clinton is on her back foot.

Clinton “would not be sending Obama into Michigan the day before the election if they weren’t hitting the panic button,” said Trump campaign spokesman Jason Miller.

On Saturday, Clinton began with visits to volunteers in the little Haiti office in Miami and an early voting center in West Miami. “We’re going to do this,” Clinton told volunteers. She held an event in Broward County, an increasingly diverse satellite county of Miami with growing numbers of South American, Puerto Rican and Caribbean immigrants. The rally was interrupted by a sudden and heavy downpour.

The rain had soaked through Clinton’s turquoise pantsuit by the time she left the stage. “I don’t think I need to tell you all the wrong things about Donald Trump,” she shouted out hoarsely over the rain, squinting out at the crowd in Pembroke Pines. “Let’s get out, let’s vote for the future!”

Clinton changed her wet pantsuit for the Katy Perry concert on Saturday evening. In Philadelphia she delivered a brief message that intended to push her audience, mostly women, including many mothers with their children, to the polls.

“It’s history in the making,” said Julie Perez, a tax accountant from Philadelphia who was in the audience. “This is the first time I’m seeing somebody live!” said her young granddaughter.

Trump in a burst of energy began the day with a 10 o’clock rally in Tampa, Florida and ended in Denver more than 12 hours later. Unlike in the past, Trump avoided falling for the bait the Clinton campaign has set for him instead criticized the rise in premiums on the exchanges created by the Affordable Care Act and Clinton’s use of a private email server.

He could not resist making one digression to attack Beyonce and Jay Z, who headlined Clinton’s event on Friday night in Cleveland.

Jay-Z “used every word in the book last night,” Trump said. “He used language last night that was so bad and then Hillary said, ‘I did not like Donald Trump’s lewd language.’ My lewd language. I tell you what, I’ve never said what he said in my life.”

For Trump—who has used the F-word at his rallies, once repeated an audience member calling a rival candidate a “p—y” and said he would “bomb the shit out of ISIS”—this was not a day for locker-room talk.

The Clinton campaign is banking on its scrupulous organizing to carry it through Election Day. The campaign counted a total of 960,000 total volunteers signed up for shifts nationwide between the final weekend and Nov. 8.

“There not much for us to do in Massachusetts,” said Liza Renzi, a 55-year-old Quincy, Mass., resident who volunteered with her daughter at the Democrats’ office in Derry. “Too much is at stake not to drive up here and help Hillary.”

New Hampshire remains a coveted state for both campaigns. Clinton used it her 2008 victory to give her campaign much-needed boost in that race. Trump notched his first win here, too. Clinton was scheduled to join singer James Taylor on Sunday night in Manchester, President Obama was coming a day later and Trump was slated to close out his campaign there on Monday night just two blocks from where Clinton rallied.

Clinton, who in public appearances has sought to conjure Democrats’ dismay with Trump, finally on Saturday aimed to make her closing case.

“When your kids and grandkids ask you what you did in 2016, when it was all on the line, I want you to be able to say I voted for a better, fairer, stronger America where everybody has a chance at the American dream,” Clinton said in Philadelphia. Then Katy Perry, wearing a cape that said “I’m with Madam President” charged the stage.

With reporting by Philip Elliott in Derry, N.H., and Zeke J. Miller in Washington, D.C. 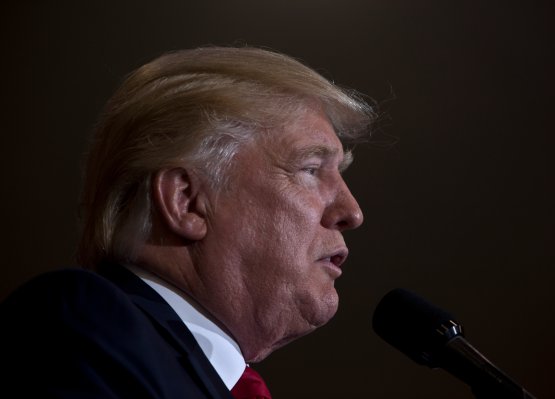 Donald Trump Rushed Off Stage by Secret Service at Rally
Next Up: Editor's Pick