This photo provided by Atlantic Records shows Sevyn Streeter at an arena for an NBA basketball game between the Philadelphia 76ers and Oklahoma City Thunder in Philadelphia on Oct. 26, 2016.
Sevyn Streeter—AP
By Katie Reilly

The Philadelphia 76ers have invited singer Sevyn Streeter back to sing the national anthem, after canceling her performance last month because she was wearing a “We Matter” jersey.

Streeter will perform the national anthem at the basketball team’s home game against the Los Angeles Lakers on Dec. 16, while wearing the “We Matter” jersey, the Sixers and Streeter said in statements on Saturday.

“After thoughtful conversation, the 76ers and Sevyn Streeter have worked together to develop a plan we hope will bring meaningful action in the Philadelphia Community,” the team said in its statement, adding that it plans to donate to the Boys and Girls Clubs of Philadelphia and collaborate with Streeter on community outreach programs in the city.

“After receiving feedback from our players, basketball operations staff and ownership group, we believe that the wrong decision was made, and Sevyn should have been welcomed to sing,” the organization said in a statement on Oct. 28.

Athletes and performers at sporting events across the country have been kneeling during the national anthem in recent months, a movement started by San Francisco 49ers quarterback Colin Kaepernick to protest racial discrimination and police violence.

“After a meaningful dialogue with the 76ers organization, I have accepted their apology,” Streeter said in her statement Saturday. “In order to move forward, it was important to me that we take action and use this as an opportunity to create positive change and dialogue throughout the community.” 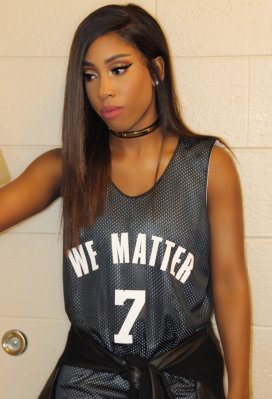 76ers Apologize for Stopping Singer in 'We Matter' Shirt From Performing National Anthem
Next Up: Editor's Pick