Beyoncé made a highly anticipated appearance with husband Jay Z at a concert in Cleveland for Democratic nominee Hillary Clinton on Friday—a rally aimed at encouraging millennials to vote in the final days of the presidential campaign.

The rally in the crucial swing state also included rappers Big Sean, J. Cole and Chance the Rapper, as Clinton’s campaign seeks more support from black voters, whose turnout is currently down in many states compared to 2008 and 2012.

Beyoncé—whose backup dancers wore blue pantsuits, a signature of Clinton’s, with shirts that read “I’m with her”—tied Clinton’s candidacy to the history of women’s suffrage.

“There was a time when a woman’s opinion did not matter. If you were black, white, Mexican, Asian, Muslim, educated, poor or rich — if you were a woman, it did not matter,” Beyoncé said.

“Less than 100 years ago, women did not have the right to vote. Look how far we’ve come from having no voice to being on the brink of making history, again, by electing the first woman president. But we have to vote.”

Both Jay Z and Beyoncé spoke about their daughter and her future as they urged the crowd to vote.

“This other guy—I don’t have any ill will toward him, but his conversation is divisive and that’s not an evolved soul to me, so he cannot be my president,” Jay Z said. “He cannot be our president.”

Clinton took the stage and praised Jay Z for addressing through music “some of our biggest challenges in the country: poverty, racism, the urgent need for criminal justice reform,” while she thanked Beyoncé for being “an inspiration to so many others.”

“This is what America is, my friends,” Clinton said.

Donald Trump preemptively criticized the show from his own rally in Pennsylvania on Friday night.

“I didn’t have to bring J-Lo or Jay Z,” he said, referring to a recent rally for Clinton in Florida at which Jennifer Lopez and Marc Anthony performed. “I am here all by myself. Just me. No guitar, no piano, no nothing, but you know what we do have—and it’s all of us, it’s all the same—we all have great ideas and great vision for our country. That’s what we have.” 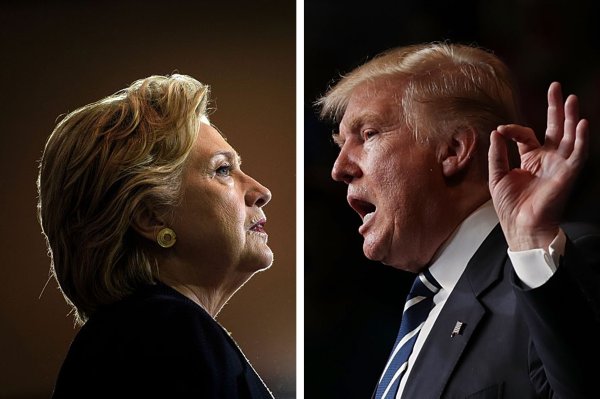 The 11 States That Could Decide Who Wins on Tuesday
Next Up: Editor's Pick