As polls tighten in battleground states and Hillary Clinton’s lead over Donald Trump is less secure, Clinton’s campaign is touting early voting numbers that show her with an advantage.

In Florida and North Carolina, two must-win states for Donald Trump if he is to have a path to the White House, Clinton campaign manager Robby Mook pointed to data that show Democrats are outpacing Republicans.

“Our campaign has organized to leverage this early voting period to build a firewall in states,” said Mook, “and build out a lead that Donald Trump is incapable of overcoming.”

Early voting, while an important indicator of a campaign’s ground game, is not always a reliable indicator of final vote totals. And it is easy for campaigns to point to particular data points to bolster the case that they are winning; in many cases they have their own internal data.

National polling averages show Clinton with a national lead over Trump shrinking to between just 1 and 2 percentage points, compared with about 7 points in mid-October. Her lead in swing states has diminished as well.

Republicans disputed that Democrats are ahead in Florida.

“Robby is cherry-picking data that is beneficial to them. He chose to only talk about the early vote but not absentee ballots,” said Republican National Committee spokesperson Lindsay Walters referring to Florida. “Republicans are leading in total ballots cast.”

In North Carolina, Democrats are ahead in vote totals, having cast 42% of absentee ballots compared with 32% for Republicans, according to the state’s data. Clinton campaign director of states Marlon Marshall said that early vote totals were up 16% overall in the state.

But Trump is still slightly outperforming Republican nominee Mitt Romney in North Carolina compared with Democrats at this point, and Romney won the state over President Obama. And African-American turnout, a key Democratic contingency, is down overall in the state compared with four years ago, though it has increased in recent days.

In Nevada, Democrats have a lead in early voting as well, Marshall said. “Trump will need to win election day by 10 points at this point to overtake and win the state of Nevada,” he said.

Polls have shown a shakeup in the presidential race since James Comey’s announcement that the FBI was investigating additional emails that may be related to Clinton’s email server. Comey said in July that “no reasonable prosecutor” would indict Clinton for using a personal server, and the investigation as considered closed.

Early voting is a chance for organized campaigns to target low-propensity voters and push them to cast in the days and weeks before Nov. 8. The goal for both Republicans and Democrats is to target voters who might not otherwise show up on Election Day, out of inconvenience or disinterest.

Trump has spoken of a “silent majority” of voters who do haven’t tolled pollsters their true preferences and will turn out on election day. Clinton campaign aides said those voters don’t exist. “So far, we have not seen a surge from the Trump camp and his supporters,” said Mook. 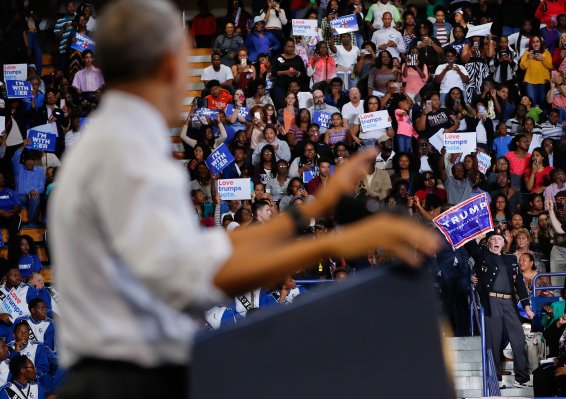 Watch President Obama Defend a Protester at His North Carolina Rally
Next Up: Editor's Pick