In this handout image provided by Barbara Kinney, (L-R) U.S. Secretary of State Hillary Clinton, her mother Dorothy Rodham and Chelsea Clinton pose during the wedding of Chelsea Clinton and Marc Mezvinsky at the Astor Courts Estate in Rhinebeck, N.Y., on July 31, 2010.
Handout—FilmMagic
Ideas
By Carol Felsenthal
Carol Felsenthal is a biographer and the author of Clinton in Exile: A President Out of the White House

By the time Hillary Rodham married Bill Clinton in 1975, it wasn’t unusual for women to keep the name they were born with, and, not surprisingly, the activist Yale Law grad did just that.

That decision was overturned in 1980 after Bill, running for reelection as governor of Arkansas, lost. He was devastated. He already had his eye on the White House, and a one-term Arkansas governor wasn’t getting there. Hillary Rodham got a slice of the blame, if not from Bill, then from people around him. She didn’t wear makeup; her clothes and hair were frumpy. One of the secretaries at the Rose Law Firm, where she was already a partner, described her eyebrows as running uninterrupted across her forehead like a caterpillar. Voters didn’t get why she didn’t take her husband’s name, or why he was such a wimp that he allowed it.

I suggest that Hillary issue a declaration of her independence, take back her name—can we dispense with “maiden”?—and read Bill the rules of the [White] House.

That would end both any confusion over who answers when someone calls for “President Clinton,” and it would recognize Hillary’s mother, who died in 2011 and was a colossal influence in shaping her only daughter.

Born on the day in 1919 that Congress passed the 19th Amendment, Dorothy Howell Rodham was an exceptionally determined woman who overcame early years of cruelty, misery and abuse. As an 8-yearold, she was discarded by her parents, put on a train in Chicago, her 3-year-old sister in tow, and sent, unattended, to Alhambra, Calif., to live with her unloving, cruel grandmother. At age 14 she went to work as a housekeeper/nanny and was lucky that her employer was kind and encouraged her to stay in high school. She married a small businessman and raised Hillary and her two younger brothers in suburban Chicago. Hillary, the family’s academic star, went to Wellesley. When she wanted to come home after a couple of months freshman year, it was her mother who lectured her about perseverance and not giving into her fears.

Back to Bill, who was reelected in 1982 and every two years thereafter until he was elected president in 1992. Hillary became “Mrs. Clinton” as Arkansas’s First Lady and then as America’s. She traded up to Senator Clinton in 2001, getting elected in the wake of Bill’s impeachment over his affair with White House intern Monica Lewinsky.

Theories abound about the dynamic of their marriage: an arrangement made in the ‘70s—he gets two terms then she gets two; an affection-free farce in which his flagrant philandering long ago squashed any affection; a flawed union but one marked by deep love.

Who knows? But it’s true that Hillary would not be this close to becoming the first female president were it not for Bill. And he wouldn’t have become president were it not for Hillary sitting beside him on “60 Minutes” in 1992 and denying he had an affair with Gennifer Flowers. He hurt her chances in ’08 with his intemperate outbursts and wildly self-indulgent speeches. And just imagine if, this time around, she hadn’t had to contend with Donald Trump torturing her by parading Bill’s alleged lovers/victims in front of a national debate audience. And what was Bill thinking when he denigrated Obamacare just as premium hikes made the issue a gift to Trump?

When I was researching a book on Bill Clinton’s post-presidency, I learned that, on leaving the White House, he slept many nights on the private jets of his buddies or at the house in Chappaqua, N.Y., that they bought so she could run from a state in which she had never lived. As Senator, she slept mostly in her D.C. “mansion” named Whitehaven, but more commonly known as “Hillary’s house.” Her housemate was her mother.

In those years, a battle raged between Hillary and her married name. In December 2006, preparing to announce her run for the nomination for president, she appeared on “The Today Show,” a kind of tryout for her announcement the following month. Family photos were displayed in the background—Hillary and Chelsea, Hillary and Dorothy. No Bill. Her campaign slogan was “HILLARY!” and her website was “Hillary for President.”

In June 2008, after she lost the nomination to Barack Obama, she released an on-line campaign photo album. There was not a single shot of Bill.

Eight years later comes a semi-serious discussion about what the former president should be called. “First Gentleman” has some obvious drawbacks, but so does “First Laddie” or, Bill’s stated choice, “First Dude,” which suggests testosterone-fueled bad behavior.

Miss Manners has pronounced it confusing to have two President Clintons in the White House, that it is a “unique title that should not be diluted,” and that he needs to be called by the “highest nonexclusive title he held:” Governor Clinton.

Sounds weird to me.

How about President Rodham and former President Clinton? That sounds just about right. 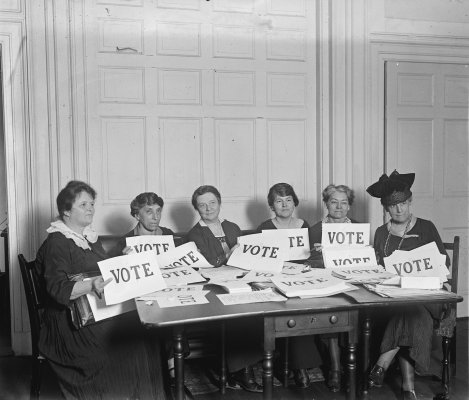 See Vintage Pictures of Female Voters in the Early Years of Suffrage
Next Up: Editor's Pick