Tens of thousands of Muslim protesters rallied in the heart of Indonesia’s capital Jakarta to demand the city’s Governor Basuki T. Purnama — popularly known by his Chinese nickname Ahok — to be prosecuted for alleged blasphemy.

One person died and several injured following clashes between protesters and the police in the evening, the Associated Press reported.

The protesters, many of whom traveled from outside Jakarta, filled Istiqlal Mosque, the city’s biggest house of worship, earlier in the day and later marched to the presidential palace. After Friday prayers, the crowd rallied beneath a banner reading “Detain Ahok,” while white-clad protesters sang and chanted, “Kill Ahok.”

Other protesters yelled, “Topple Jokowi,” referring to Indonesian President Joko Widodo, whose party backs Basuki in the gubernatorial election next year. Authorities deployed about 20,000 police and military personnel in anticipation of violence and many schools and offices gave students and employees a day off.

By the afternoon, save for some racist and violent chants, the protest was largely free of clashes. But when the protesters refused to leave the area around the presidential palace in the evening, throwing bottles and stones at the police. The police then fired tear gas and the mob retaliated by burning police vehicles. The demonstrators later marched to the parliamentary building and there were reports of riots in Chinese neighborhoods in the north of Jakarta, near the private residence of Basuki.

Hearing about the violence, some protesters react in anger, some in disbelief. “If we had known, we would have burned those belonging to the Chinese,” one tells TIME as he stands in front of the parliament building. Another one says: “It’s impossible we are involved in the riots in North Jakarta,” — to which his friend adds: “We came for peace.”

Earlier in the afternoon, a protester from Tangerang, in the outskirts of Jakarta, who only wanted to give his name as Uje, said he took part in the protest “because of my religion. All of the religious followers are offended. If we follow Islam, we would be offended; except the non-religious, who will be defending him [Basuki].”

Bambang Suherman, a Jakarta resident who rallied in front of the presidential palace, told TIME this afternoon: “I think the demonstration today has reached the target, the message is there: giving pressure.”

The candidacy of Basuki — who is ethnic Chinese and a Christian — has long been controversial among hard-line and ultra-conservative Muslims, who argue they shouldn’t have a non-Muslim leader. The protests were called after claims the governor insulted Islam. In a speech on Sept. 27, he said: “Ladies and gentlemen, you don’t have to vote for me because you’ve been lied to by those using [the Quran’s] Surah al-Maidah verse 51. That’s your right.”

Hard-liners at the Islamic Defenders’ Front (FPI) — a religious organization that has long been at odds with the uncompromising Basuki — seized the opportunity to accuse him of blasphemy, report him to the police and whip up anti-Chinese sentiments.

Basuki has since apologized for his remark, but the police investigation over the alleged blasphemy continues. Defenders of Basuki said a transcript and video of his words that went viral on social media, sparking anger, had been edited.

Friday’s protest didn’t escape the attention of Indonesian jihadists. Photos circulated on social media appeared to show pro-al-Qaeda fighters in Syria posing with “anti-Ahok” messages. There were also reports of Indonesian ISIS supporters calling on sympathizers to commit terrorist acts in the country on Friday. Jakarta has been on high alert for days, following fears that extremist Muslims from across the country would be flocking to the Indonesian capital.

After saying nothing for weeks, President Jokowi — who was Jakarta governor before his deputy, Basuki, succeeded him — scrambled Monday to try to cool tensions by visiting his political rival Prabowo Subianto. Prabowo’s party endorses another candidate for Jakarta’s gubernatorial election. The President also met with leaders of Nahdlatul Ulama and Muhammadiyah, Indonesia’s biggest Muslim organizations, and the Indonesian Ulema Council the following day.

On the eve of the mass demonstration, the Communication and Information Ministry blocked 11 Islamic websites deemed to have spread hate speech.

“I think the fear of trouble, the overwhelming presence of police and the exhortations by all Muslim leaders to ensure that it stays peaceful have kept it relatively orderly — so far,” says Sidney Jones, of the Institute for Policy Analysis of Conflict in Jakarta.

On Oct. 14, the FPI led thousands of protesters, from the Indonesian capital and outside, to demand authorities prosecute Basuki for blasphemy.

The rise of Basuki as Jakarta governor was hailed as a milestone in 2014, 16 years after an anti-Chinese riot engulfed the Indonesian capital. Political observers say that his case would be a test for Indonesia, the country with the world’s largest Muslim population that prides itself as a beacon of democracy and tolerance.

The race for Jakarta’s top job is a hotly contested one. One of the three contenders is former President Susilo Bambang Yudhoyono’s son. So far, Basuki leads in opinion polls.

“Very few people have had the courage to suggest that what Ahok said was aimed not at the Quran, but at the people who were using a Quranic verse to suggest that a non-Muslim couldn’t govern Muslims,” Jones tells TIME. “What’s at stake is the quality of Indonesian democracy: Will public policy continue to be set by hard-liners and mass action in the street, and will anyone stand up for the right of non-Muslim Indonesians to have an equal right with Muslims to govern?”

— With reporting by Febriana Firdaus / Jakarta 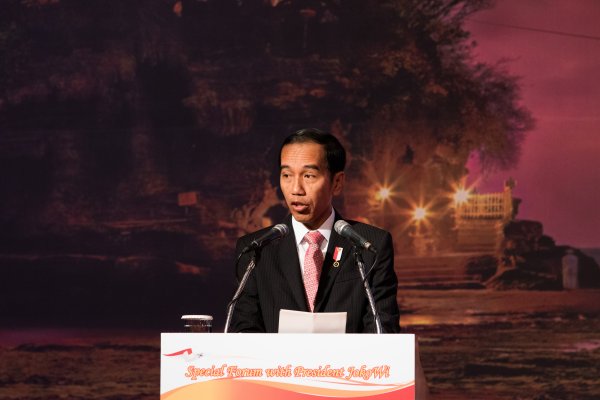 Indonesian President Speaks Out Against Anti-LGBT Rhetoric
Next Up: Editor's Pick