More Than 200 Migrants Drown in Mediterranean Off Libya Coast

Members of Maltese NGO MOAS help people to board a small rescue boat during a rescue operation of migrants and refugees by the Topaz Responder ship run by Maltese NGO Moas and the Italian Red Cross, on Nov. 3, 2016, off the Libyan coast in the Mediterranean Sea.
Andreas Solaro—AFP/Getty Images
By Abigail Abrams

More than 200 additional migrants have died trying to cross the Mediterranean Sea.

The United Nations said Thursday that at least 239 migrants died in two separate shipwrecks off the coast of Libya, according to the Associated Press. Survivors said their boats capsized in rough waters, leaving them stranded in the Mediterranean for hours.

The 31 survivors arrived early Thursday on the Italian island of Lampedusa, which has become a frequent rescue spot for the scores of migrants leaving Africa for Europe, the Washington Post reports. A U.N. refugee agency spokeswoman Carlotta Sami said survivors of the first shipwreck reported that pregnant women and children were on board, but no children were saved in the rescue, according to the Post.

Sami said 12 bodies were recovered from the first boat, and the remaining people on the boats are believed to have drowned. If correct, these latest shipwrecks bring the count of people dead or missing in the Mediterranean to 4,220 this year, the highest toll on record, according to the AP. 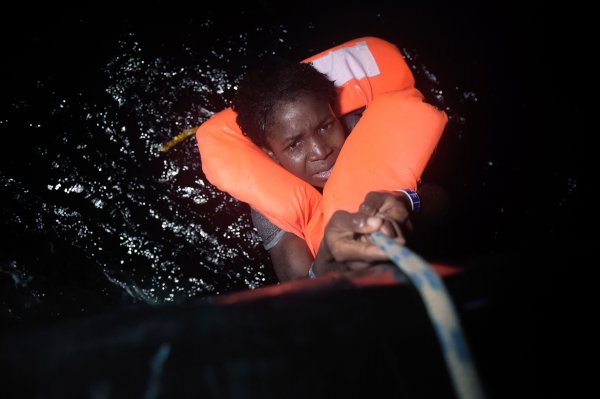 Why This Has Been the Deadliest Year Yet for Migrants Crossing the Mediterranean
Next Up: Editor's Pick