Brazilian youth have a voracious appetite for Justin Bieber. Brazil’s Globo reports that a dozen dedicated Beliebers have set up camp outside Rio de Janeiro’s Sambadrome, where the “Sorry” singer’s concert is set to take place at the end of March 2017. (Another group have also established a presence at São Paulo’s Purpose tour venue; that show is in April). Tickets for both shows went on sale on Oct. 25 for a starting price of about $77 and are already completely sold out, but the superfans are super-committed to finding some last-minute opportunity to see the elusive Biebz in person, and willing to spend the next five months waiting it out.

“We are here for our idol and our love for him made us do this madness,” one of them told the paper.

The Rio squad has been in place since Wednesday, bringing with them tents, blankets, snacks, and even insect repellent (it’s turning into summer in Rio), O Globo reports. They take it in turns to man their makeshift camp while the rest attend school or go to work; about 130 young people will be involved in the effort. According to the campers the area is not particularly safe, with homeless and drug users nearby, so they are careful not to leave the tents alone. And while five months may seem like quite a stretch, they’re not new at this game. During Bieber’s last concert in Rio, in 2013, they said they did the same thing for two months in advance of his arrival.

One Twitter fan account posted a shot of the 8-tent mini-city cropping up outside the São Paulo venue, Citibank Hall, noting that the “extra show” they’re eager for is still not at all official.

Bieber is currently touring in Ireland. 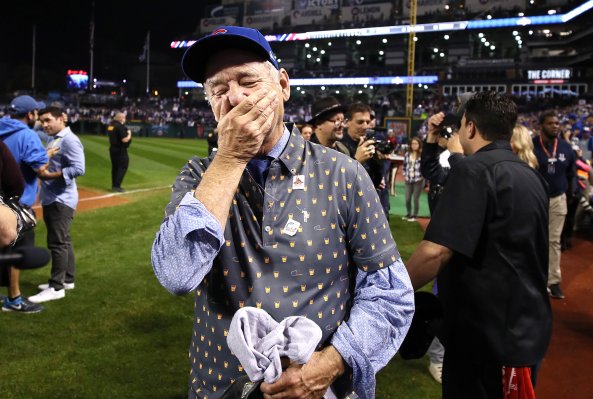 These Fans Are Feeling All the Feelings After the Chicago Cubs' World Series Win
Next Up: Editor's Pick