Police in Burma said they will soon begin arming and training civilians as part of ongoing counterterrorism operations in the country’s conflict-torn western Arakan state, after a deadly attack on border patrol officers last month. The government attributed the attacks to suspected militants belonging to the Muslim Rohingya community.

Senior state police officials told Reuters that non-Muslim residents in the state’s north “will be given weapons and other equipment, like police.” Training will reportedly begin on Nov. 7 for some 100 initial recruits in the state capital Sittwe, Police Captain Lin Lin Oo told the news agency.

Most of the population in northern Arakan is Rohingya, a stateless Muslim minority that is considered one of the world’s most persecuted peoples. The area is also home to ethnic Arakanese, also known as Rakhine, who are predominantly Buddhist.

Human rights monitors and members of the Rohingya community said that the move to arm Buddhist civilians could escalate tensions in the region, which has seen its deadliest month since a rash of riots in 2012 that overwhelmingly affected Muslims.

Read More: The Military Continues to Search for Suspected Jihadists in Western Burma

On Oct. 9, armed militants reportedly ambushed three border patrol posts in Maungdaw township near Burma’s border with Bangladesh. Nine policemen and eight of the assailants died in the coordinated attack, according the government.

Much of the state’s north was immediately put on lock down as authorities searched for some 400 suspected militants; humanitarian aid was suspended and independent media was not allowed. According to government figures, 33 suspects have been killed in the counterterrorism operations since Oct. 9.

U.N. officials and U.S. diplomats have called for an investigation into allegations that the military has abused civilians in the operating zone. Eight Rohingya women reportedly said they were raped by soldiers, as allegations also emerged of villages being razed and Muslims being extra-judicially killed.

The plan to create a “people’s militia” was floated in state-controlled media last month. A government delegation said residents had asked to be armed and trained because they were afraid of the suspected jihadists. Videos circulated online in recent weeks appear to show a group of Muslim men and boys armed with sticks, swords and guns, though the videos cannot be verified.

Reuters said police referred to the new scheme as an auxiliary police force, distinguishing them from army-backed militias that have often clashed with ethnic insurgents throughout the country’s decades-long civil war.

Aung San Suu Kyi, Burma’s de facto leader, is currently in Japan and has made few public remarks about the operations in Arakan, which are being carried out by the military. Rights advocates have criticized her silence, though some political analysts say the events there have exposed the limits of her authority. 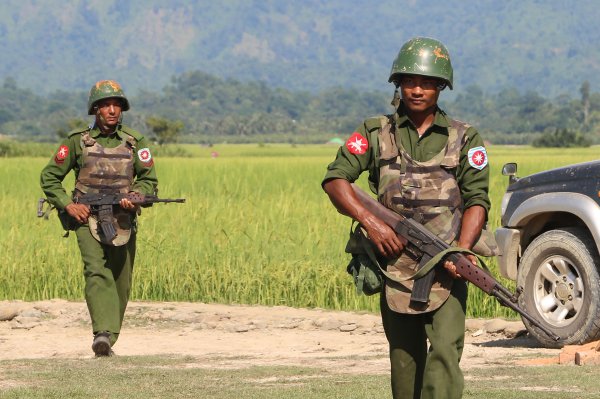 8 Rohingya Women 'Raped at Gunpoint' by Burma Army
Next Up: Editor's Pick