In July, his family moved from Portland to Bend, Oregon, and after being homeschooled his entire life, he started to attend public school with the hopes of achieving his dream of throwing a birthday party with classmates and friends.

Last Sunday, the house was decked out, the party theme based on Mahlon’s favorite book, Diary of a Wimpy Kid, was set and the birthday cake ready to cut, but no one showed up.

Mahlon and his family were crushed.

“I was heartbroken,” Mahlon’s mother, Kristen Layne, tells PEOPLE. “I woke up the next morning after his party and my face was literally almost swollen shut from crying so hard.

“We would have been thrilled with one child. If one child had shown up, that would have made our day.”

Devastated, Layne, 38, wrote about her son’s birthday party debacle on her blog, Life on Peanut Layne.

“Words cannot describe the utter and complete devastation that washed over me, my husband and my nearly 70-year-old father who was almost brought to tears himself,” she wrote. “Seeing my heartbroken little boy sitting all alone at his brightly decorated, empty party table was more than I could take.”

But the stay-at-home mom says her son is a “rare breed” and finished the day with his head held high.

“Despite his pain, he tried his hardest to have a good time,” she says.

The mother of five decided to make the best of it and the party became a family affair, followed by a night of bowling. Her post became a plea to all parents to think twice about failing to RSVP.

“I know that we’re all busy and it’s easy to overlook in anticipation and kind of think, ‘Oh, I’ll get to it later or kind of think that, ‘Oh, we’re busy that weekend, can’t make it,’ ” Layne says. “But there’s a child on the other side of the invitation that’s expecting people to come.”

What she didn’t expect was the outpouring of positive response in support of her son. After her blog post made the rounds, she received messages from other parents sharing their own child’s birthday party failures, anonymous gifts and birthday wishes for her son. Best of all? A birthday Facetime call with Jeff Kinney, the author of Diary of a Wimpy Kid and an autographed copy of his yet-to-be-released book.

“He’s beaming,” Layne says of her son. “He’s saying, ‘Jeff Kinney is my friend!’ He’s been guarding [the book] with his life.”

Since the birthday fiasco, Mahlon has returned to school and even brought goodie bags for the friends that didn’t attend. He’s hopeful that next year — after more time with his peers — friends will attend his party.

In the meantime, Mahlon is making a thank-you video for all the parents and kids who have messaged him to say they have a friend in him.

Layne never expected her heart-wrenching post — with the poignant message to “just RSVP”— to turn into a birthday for Mahlon that can’t be topped.

“For his next birthday, people are joking, ‘What’re you going to do for his 10th birthday? He already got to talk to Jeff Kinney!’ “Layne says, laughing. “But really all he wants is to have a friend there. That’s all it’s about for him. Having friends that he can share his day with.” 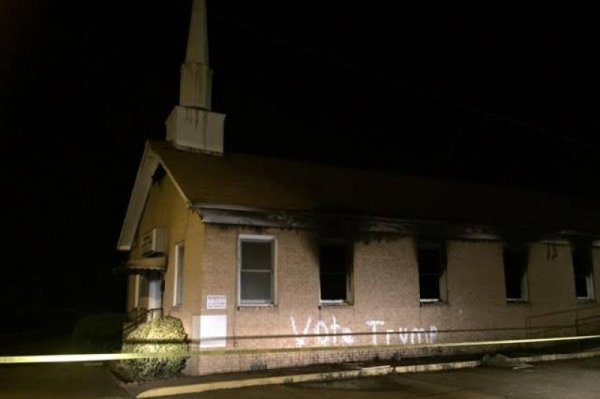 Burning and Vandalism of Mississippi Black Church Is Being Investigated as a Hate Crime
Next Up: Editor's Pick