Actor Bill Murray attends Game Six of the 2016 World Series between the Chicago Cubs and the Cleveland Indians at Progressive Field on November 1, 2016 in Cleveland, Ohio.
Jason Miller/Getty Images
By Rose Minutaglio / People

No ticket? No problem!

Die-hard Cubs fan Karen Michel got the surprise of a lifetime when at Tuesday’s World Series game, actor Bill Murray gifted her with a Game 6 ticket — right next to his seat.

She says the actor noticed her walking away from the box office, heartbroken, after she was unable to score last minute tickets to the game.

“I thought some people holding tickets might not show up or something, I figured I’d give it a shot but I wasn’t expecting much,” Michel, 54, tells PEOPLE. “It was crazy, Bill walked right by me, grabbed me and gave me a ticket! I said, ‘Where are we going?’ and he said, ‘You can come sit with me!’ ”

Murray escorted Michel to their seats — six rows behind home plate — and the two shared nachos while gabbing about Cubs players and cheering their team on.

The new friends were surrounded by celebrities, including Eddie Vedder of Pearl Jam (he sat a few rows in front of Murray and Michel) and Al Roker (in the row behind), at the game.

“We talked about growing up as Cubs fans and playing baseball,” says Michel, who was born and raised near Munster, Indiana. “Bill said he was born in Evanston and used to go to the games with his brother and he played catcher growing up.”

“He’s just so personable and we had a blast because we are both very knowledgable about baseball,” she adds.

When the game ended with a “beautiful” Cubs 9-3 win against the Cleveland Indians, Michel says she gave her new friend Bill Murray a great big hug.

“I was so appreciative of what he did for me, he’s a solid guy,” she says. “I’ll always remember, because it was a once in a lifetime opportunity and it happened to me.”

Michel also invited the actor to the opening of the Mascot Hall of Fame near her home in Whiting, Indiana, next year.

“It seemed like something that he would love!” says Michel. “I’ve been a Cubs fan since I was 6 and he picked me out of a crowd to make my dream come true, it would be the least I could do to invite him to Whiting.” 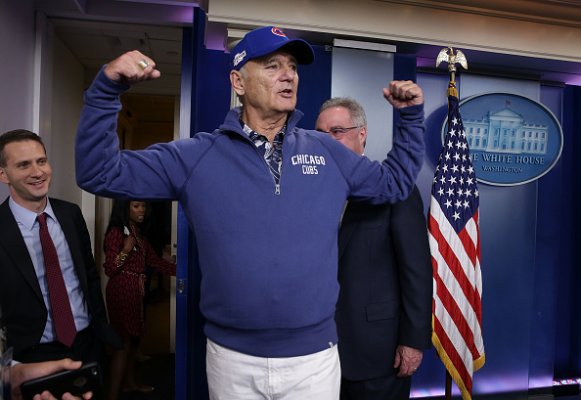 Bill Murray Is Singing ‘Take Me Out to the Ballgame’ at the World Series
Next Up: Editor's Pick