Donald Trump‘s campaign has denounced a KKK newspaper that threw its support behind the Republican nominee.

The Crusader, a quarterly publication that calls itself “The Political Voice of White Christian America,” devoted its front page to Trump and his mission to “Make America Great Again,” editorializing that America was originally great because it was founded as “a White Christian Republic.” In an interview with the Washington Post, the author of the article, Pastor Thomas Robb, said it was not an official endorsement, “because, like anybody, there’s things you disagree with. But he kind of reflects what’s happening throughout the world. There seems to be a surge of nationalism worldwide as nationals reclaim their borders.”

The Trump campaign released a statement on Tuesday night saying, “Mr. Trump and the campaign denounces hate in any form. This publication is repulsive and their views do not represent the tens of millions of Americans who are uniting behind our campaign.”

Trump faced criticism earlier this year when he failed to disavow former KKK grand wizard David Duke, who showed support for the Republican nominee. In an interview with CNN, Trump plead ignorance of Duke, saying, “I don’t know—did he endorse me, or what’s going on? Because I know nothing about David Duke; I know nothing about white supremacists.” 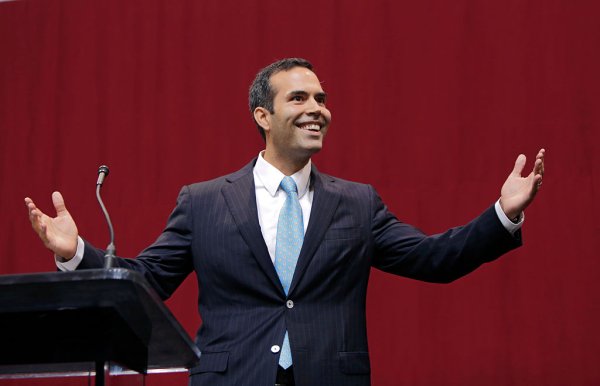 George W. Bush Nephew Says He Was Just 'Speculating' Former President Could Vote for Hillary Clinton
Next Up: Editor's Pick