What to Know About the Ambush Killings of Iowa Police Officers

Two police officers in Iowa were shot and killed as they sat in their patrol cars early Wednesday in what authorities are calling “ambush-style attacks.” Here’s what we know about the deadly shootings:

What happened?
An on-duty police officer was found fatally shot inside his vehicle shortly after 1 a.m. in Urbandale, Iowa, authorities said. Two police officers responding to reports of shots fired arrived and made the grisly discovery.

About 20 minutes after that and about two miles away, another police officer in Des Moines was found shot in his patrol car. The officer was taken to a nearby hospital, where he died shortly afterward. Early indications show the pair of officers didn’t have time to interact with the gunman, Des Moines Police Sgt. Paul Parizek said at an emotional news conference.

“In all appearances, it looks just like that—that these officers were ambushed. It doesn’t look like there was any interactions between these officers and whoever the coward is that shot them while they sat in their cars,” Parizek said before he broke down in tears.

Who did it?
A 46-year-old suspect named Scott Michael Greene was taken into custody shortly after police identified him as someone who may have “critical” information to the case, police said. Authorities found the Urbandale resident, who is white, in Dallas County and are bringing him to Des Moines. Greene, who has a history with Iowa law enforcement, flagged down a state Department of Natural Resources officer and surrendered to the officer, according to the Associated Press. Police do not believe there were any other suspects involved in the fatal shootings.

Authorities do not yet know the motive but discussed the tense anti-police culture playing out in the country following several high-profile police shootings of unarmed black men. “There’s a clear and present danger to police officers right now,” Parizek said. “These guys were gunned down, sitting in their car, doing nothing wrong. There’s somebody out there shooting police officers.”

Who were the officers?

The slain officers were identified as Urbandale police officer Justin Martin and Sgt. Anthony “Tony” Beminio of the Des Moines police department. Beminio, 39, who was married and had children, joined the police department in Des Moines in 2005. Martin, 24, who was single, was hired as an Urbandale cop in August 2015.

Martin only began patrolling in August after graduating from the department’s police academy and going through field training. “We had high expectations of his future and it’s tragic we’ve been cut very short here,” Urbandale Police Chief Ross McCarty said at a solemn news conference.

McCarty said he believes the gunman fired between 15 and 30 shots at Martin’s vehicle after walking up to the officer’s squad car on foot.

Urbandale Police Sgt. Chad Underwood said he believes the department, which has a little more than 50 cops, has never before lost an officer in the line of duty.

The losses rocked law enforcement agencies in the state and sent rippling effects across other police departments in the country. “These were our friends,” Parizek said.

Ben Hammes, spokesperson for Iowa Gov. Terry Branstad, decried the acts of violence in a statement. “An attack on public safety officers is an attack on the public safety of all Iowans,” the statement said. “We call on Iowans to support our law enforcement officials in bringing this suspect to justice. Our thoughts and prayers go out to the families of the police officers who were tragically killed in the line of duty as well as the officers who continue to put themselves in harm’s way.” 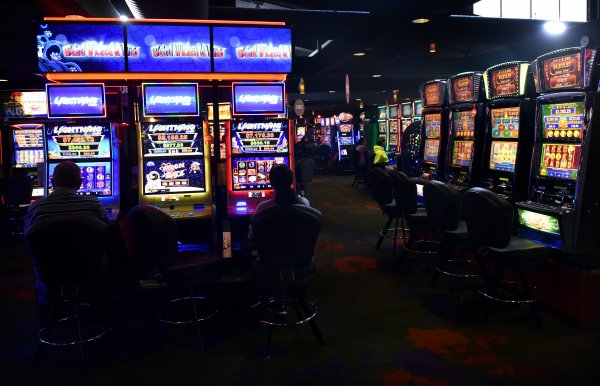 Woman Offered a Steak Dinner After Slot Machine Said She Won $43 Million
Next Up: Editor's Pick