How Doctor Strange Hints at Big Changes for the Marvel Universe

Warning: Spoilers for Doctor Strange ahead.

Marvel’s movies are becoming increasingly connected: the last Captain America movie featured no less than 12 comic book superheroes. But Doctor Strange, out Nov. 4, is refreshingly estranged from the rest of the Marvel Cinematic Universe (MCU). Someone who has never seen a Marvel movie—which, given that there are 14, would be quite a feat—could walk into Doctor Strange cold and still keep up with its twists and turns.

That may not be the case going forward, however, as the film’s conclusion and two end-credits sequences begin to tie the mystical aspects of Doctor Strange’s world into Marvel’s sprawling storylines.

How does Doctor Strange fit into the rest of the Marvel universe?

Dr. Stephen Strange is a former surgeon who wields mystical powers, the dangers of which dwarf the alien threat of the Avengers films.

However, Marvel didn’t pass up a chance to connect Benedict Cumberbatch’s Strange into the larger MCU at the end of the film. Once Strange has defeated the bad guys, Wong tells him that the Eye of Agamotto—the eye-shaped necklace that allows Cumberbatch to fast-forward and rewind time—is an Infinity Stone. We’ve seen other Infinity Stones in the Marvel Universe before—the Tesseract in Avengers is one, the Orb in Guardians of the Galaxy is another. They’ll play a big role in Avengers: Infinity Wars (more on that later), as will Strange. Marvel has already confirmed that Cumberbatch will reprise the role in the next Avengers movie, due out in 2018.

But you won’t have to wait two years to see Strange on screen again. In a post-credits sequence of Doctor Strange, the magician offers to help Thor track down his father, Odin, which means Benedict Cumberbatch is likely joining the cast of Thor: Ragnarok along with Chris Hemsworth (Thor), Idris Elba (Heimdall), Tom Hiddleston (Loki), Anthony Hopkins (Odin) and Cate Blanchett (baddie Hela).

Will there be more Doctor Strange movies?

Marvel hasn’t announced a second Doctor Strange movie yet, but the post-credits sequence strongly suggests that there will be one. In it, Chiwetel Ejiofor’s Mordo parts ways with Strange, angry that The Ancient One and then Strange himself harnessed dark magic to save the world. Breaking the rules should have consequences, he argues: “The bill comes due.”

Mordo also seeks out Jonathan Pangborn (Benjamin Bratt), the man who originally told Stephen Strange how to find the Ancient One. The once-paralyzed Pangborn has been using magic to walk. Mordo tells Pangborn that he’s been meditating and decided the world’s problems are due to “too many sorcerers” as he steals Pangborn’s magic from him, leaving Pangborn crumpled on the ground.

The scene strongly suggests that Mordo will turn into Doctor Strange’s next antagonist. (I hesitate to use the word villain since technically it’s Strange who is willing to bend the rules and use dark magic, not Mordo.) Mordo could show up in another Marvel movie—Ragnarok or even Infinity Wars—but given how self-contained the first Doctor Strange film was, he likely will not battle Strange until Doctor Strange 2.

What’s next for Marvel?

Director Jon Watts has compared his Spider-Man reboot to a mashup of a John Hughes movie and a superhero film. Tom Holland, who debuted as Spider-Man in Captain America: Civil War will play a high-school age Spidey. Other cast members include Donald Glover, Zendaya, Michael Keaton and Robert Downey Jr. as Iron Man. (Here’s hoping we get more Aunt May-Tony Stark scenes.)

If you were wondering why Thor and Hulk were missing from Civil War it’s because they’re off on their own adventure. Mark Ruffalo’s big green dude joins Chris Hemsworth’s Norse god for a space battle against Hela, goddess of death, played by Cate Blanchett. Cumberbatch is also rumored to make an appearance in the film as Doctor Strange.

After making his onscreen debut in Captain America: Civil War, Black Panther is getting his own film. The Ryan Coogler-directed story will focus on Black Panther’s homeland of Wakanda, and the star-studded cast includes Chadwick Boseman (T’Challa, a.k.a. Black Panther), Michael B. Jordan (villain Erik Killmonger), Lupita Nyong’o (Nakia) and Forest Whitaker (Zuri).

The Russo brothers, who directed Civil War, will also tackle the next Avengers movie. In Infinity War, Thanos (the big purple guy played by Josh Brolin in Guardians of the Galaxy) will try to collect all six Infinity Stones. Together, they fill the Infinity Gauntlet, a sort of glove that gives Thanos the power to destroy the universe.

For those keeping count at home, five of the Infinity Stones have shown up in the Marvel movies so far: The Tesseract (Captain America, The Avengers), Aether (Thor: The Dark World), Orb (Guardians of the Galaxy), the stone in Vision’s head (Captain America: Civil War) and the Eye of Agamotto (Doctor Strange). If he succeeds, he can destroy the universe.

Presumably the Avengers will have to join together with the Guardians of the Galaxy, Captain Marvel and Doctor Strange to defeat Thanos.

As the ending of Ant-Man suggested, Evangeline Lilly will finally get to suit up as the Wasp in this sequel. (It’s also the first Marvel superhero movie with a female character’s name in the title. It took a decade for that to happen.) Director Peyton Reed has assured fans that Ant-Man and the Wasp will be a team—she is not a supporting character.

Marvel announced at Comic-Con in July that Oscar-winning actress Brie Larson will play Carol Danvers, a.k.a. Captain Marvel. The movie will be Marvel’s first superhero film with a female protagonist. Carol Danvers is a fighter pilot with the ability to fly and shoot beams out of her hands and in comic book lore has teamed up with both the Avengers and the Guardians to save the world. 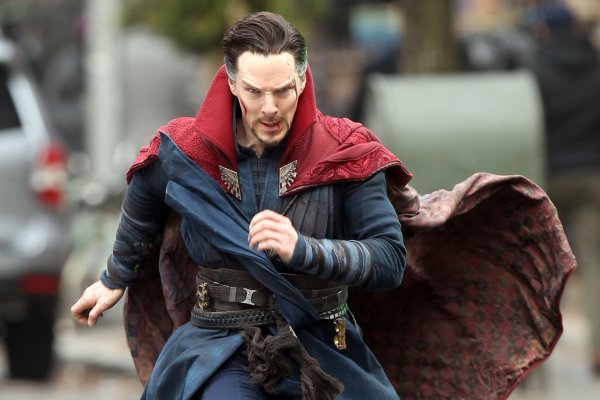