Scuffles broke out again in Hong Kong’s legislature Wednesday, after three consecutive weeks of drama and paralysis over choice words and political gestures by two rebel lawmakers taking their oaths of office.

During a Legislative Council chamber meeting, the pro-independence lawmakers Yau Wai-ching, 25, and Sixtus “Baggio” Leung, 30, — who had previously been barred from the floor — entered and demanded to take their oaths on the spot.

The newly elected lawmakers, who do not accept that the territory is part of China, have been blocked three times from being sworn in. A clause in the oath requires the lawmaker to pledge allegiance to the Hong Kong Special Administrative Region of the People’s Republic China, but each time the lawmakers have deviated from the script or held banners that read “Hong Kong Is Not China.”

On Wednesday, Legislative Council president Andrew Leung (no relation to Sixtus Leung) ordered the pair ejected — but not before they had read out the oath of office using their own microphones, according to local media. The scuffles broke out as guards attempted to remove Sixtus Leung from the chamber.

The latest drama comes one day before an unprecedented judicial review, brought by the territory’s government, to look into whether Sixtus Leung can readminister their oaths so the pair can take their seats in office.

Some of the pro-democracy legislators — including Nathan Law, Hong Kong’s youngest-ever elected representative; Eddie Chu, who was forced into hiding at one point after his election; and veteran activist Leung Kwok-hung, a.k.a. “Long Hair,” huddled around Sixtus Leung, trying to prevent guards from carrying him out.

“People elected by Hongkongers have the right to take their oaths of office and speak for Hongkongers!” cried Chu during the tussle.

After a change in venue following a 30-minute suspension, the meeting carried on intermittently while Yau and Leung made another attempt to charge into the room. Four security personnel were sent to hospital following the tussle, and the council has called in the police to investigate the matter.

Citing safety reasons, the meeting was prematurely adjourned for yet another week.

Chaotic scenes such as these have erupted in the Legislative Council over the past few weeks, and the Youngspiration party lawmakers — elected on a wave of local sentiment against Chinese encroachment in September — have faced a barrage of criticism from pro-Beijing figures. On Wednesday, there was no sign of the large groups of protesters who had been mobilized by pro-China groups to rally against them — ostensibly outraged by how Leung and Yau took their oaths of allegiance when the council first met on Oct. 12.

Starry Lee, chair of the pro-Beijing Democratic Alliance for the Betterment and Progress of Hong Kong, told reporters Wednesday that the duo “shouldn’t have used the platform to promote Hong Kong independence to begin with,” if they were serious about taking office. “There is no room for the promotion of Hong Kong independence under the ‘one country, two systems’ framework,” she added.

The government’s judicial review of the legislature, which begins Thursday, is already raising eyebrows in Hong Kong. The legal action worries many in the territory who fear the executive branch is unduly interfering in the legislature. Questions are abound as to whether judicial independence and the separation of power in Hong Kong are under threat.

There are also concerns now that China itself may directly step into this affair.

The first hint of overt Chinese intervention came when Leung Chun-ying, Hong Kong’s chief executive, canceled a trip to Beijing, reportedly to stay in Hong Kong to deal with the judicial review, of which he is listed as a co-plaintiff. He also suggested that mainland China’s top legislature could step in and offer its interpretation of the Basic Law, the territory’s miniconstitution.

In a statement issued Wednesday, the Hong Kong Bar Association said it is “deeply concerned” about Leung Chun-ying’s comments, saying that any intervention by China’s top legislative body, National People’s Congress Standing Committee (NPCSC) would “deal a severe blow to the independence of the judiciary and the power of final adjudication of the Hong Kong court.”

On Tuesday, multiple reports quoting unnamed government sources emerged across various Chinese- and English-language media outlets, including the South China Morning Post, indicating that the NPCSC would issue what is set to become its fifth interpretation of the Basic Law at a meeting Thursday, the same day as the judicial review hearing is set to get under way.

However, a report from Radio Television Hong Kong Wednesday suggested that no items pertaining to Hong Kong had appeared on the Chinese legislature’s agenda so far.

“Generally, when they issue an interpretation in Hong Kong, it’s always sensitive, and in this case particularly so,” Michael Davis, a law professor recently retired from the University of Hong Kong, tells TIME, explaining that “they seem to be moving ahead of the court.” 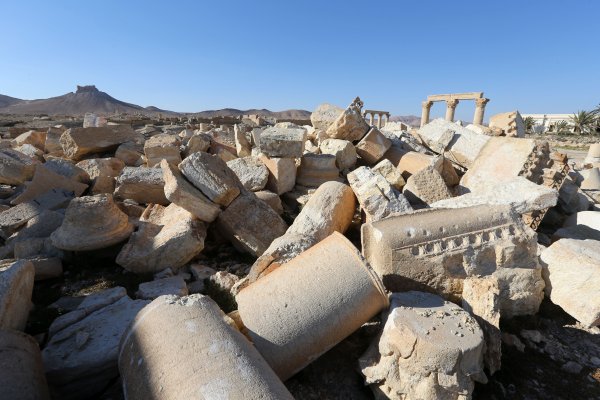 The Louvre May House Endangered Treasure From War Zones
Next Up: Editor's Pick