South Korean prosecutors have detained a longtime confidante of President Park Geun-hye on Monday, after questioning her for hours about allegations of meddling in the country’s affairs and siphoning funds.

Under provisions for “emergency detention,” authorities have 48 hours to decide whether to formally arrest Choi Soon-sil, a cult leader’s daughter, who is alleged to have involved herself in advising the President on policy. Investigators are concerned that she might flee the country or destroy evidence pertinent to the ongoing probe, reports South Korea’s official Yonhap news agency.

The revelations, coming after weeks of reporting by South Korean media, have sparked days of massive protests in Seoul calling for Park’s resignation.

Choi has been accused of improperly influencing how Park, with whom she has been friends for over 40 years, runs the country, despite holding no governmental posts, according to Yonhap. She also stands accused of taking funds from two nonprofit groups.

In a televised address, Park admitted to asking Choi for comments on several of her speeches as President before they were delivered.

Choi’s return from seclusion in Germany to face questioning resulted in dramatic scenes Monday, as she was inundated by a crowd of journalists and protestors outside the prosecutor’s office in Seoul. “Please, forgive me. I’m sorry,” she told reporters, according to the Associated Press, “I committed a sin that deserves death.”

Choi’s father Choi Tae-min styled himself the pastor of a cult known as the Church of Eternal Life and became close to Park by claiming that he could channel messages from her mother, who was assassinated in 1975 when Park was 23 years old. Their relationship contributed to Park’s estrangement from her siblings, according to the Korea Herald. 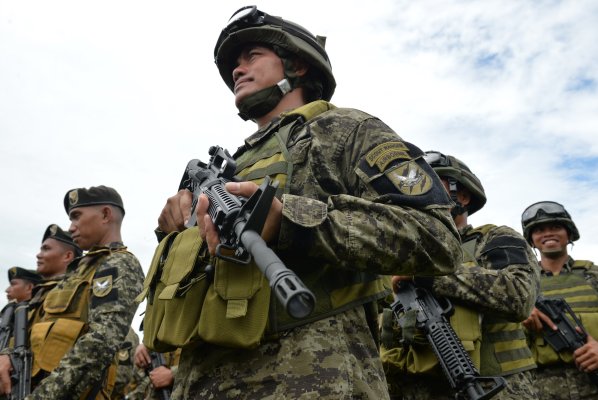 Washington Halts Sale of Assault Rifles to the Philippines
Next Up: Editor's Pick