President Obama stopped by Full Frontal with Samantha Bee on Monday, for his exit interview as President of the United States.

Bee spoke to the President in a Halloween-themed interview and aptly came as a witch. “That’s not a witch costume,” Obama wisely pointed out. “I’m a woman in television, and I’m over 40, so I’m already in costume,” Bee said. As for Obama’s costume, the President claimed to be “what happens when young people vote.”

That was just his first plea to encourage first time voters to head to the polls on Nov. 8. “Young people have a bigger stake in this election than anybody. I would hope that you would be willing to take about the same amount of time that you spend looking through cat videos on your phone to make sure your democracy is working,” said Obama, noting that issues like gender equality, climate change and college debt could be decided by the next President.

Bee noted that sitting down with a “47-year-old mother of three” perhaps wasn’t the best way to get young people to vote. “Have you thought about going on Antiques Roadshow?,” joked Bee.

She also wanted to know if Obama had considered pausing on his way out of the White House to whisper to Donald Trump that he really wasn’t born in the USA, reigniting the so-called birther controversy. Obama laughed, but quickly turned serious, saying, “I will be organizing my post-presidency where I’m not close enough to him to whisper in his ear.”

As this was Bee’s first exit interview of a President, she wanted to know what he would like to be his legacy, “other than not having everything overturned the day after inauguration,” naturally. That was an easy question for Obama who said, “The thing that I care most about is making sure that there’s a generation of young people who are following me and Michelle.”

As a final homage to Halloween, Bee asked Obama to share a spooky story about what happens if people don’t vote. “Donald Trump will be President,” said Obama. “That was very scary,” said Bee. 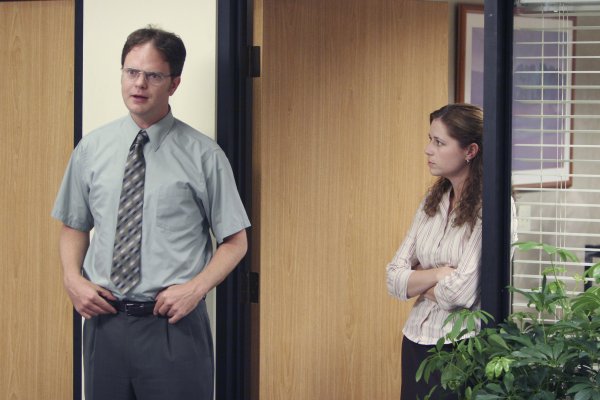 The Office's Jenna Fischer Tweets Photo of Kid Dressed as Dwight for Halloween
Next Up: Editor's Pick