Warning: This post contains spoilers for Westworld episodes one through five.

This week’s episode of Westworld was truly exploding with major revelations from all over the park.

Halfway through the season, the action headed to Pariah where the outlaws really let loose and reveled in transgressions out in the open. The fifth episode, “Contrapasso” focused largely on rebellion. Just about all the “players” went way off-script in pursuit of freedom, or at least an unacknowledged craving for it.

Dolores is absolutely self-aware.
Since the very first episode when Dolores smacks a fly, she’s been becoming increasingly sentient. Dr. Ford and Bernard seem to buy that she’s still loving her provincial life. If anyone asks what good old Dolores is up to, the answer is: minding her own beeswax in a comfy bubble of ignorance, but this episode gave us never-before-seen confirmation that she’s acutely aware of her twisted situation.

Once Dr. Ford taps into the slice of her memory that recalls a very throwback encounter with Arnold, she confesses, “He told me I was going to help him. To destroy this place.” And when Dr. Ford leaves that (possibly monitored) room, we get the icing on the cake when she says, “he doesn’t know. I didn’t tell him anything.” She’s likely talking to Arnold, the man behind the voice within.

Not only is Dolores playing her makers, she’s also finally picking up on it when people call out the fact that her world is fake. (Previously, these wake-up calls didn’t seem to register with her.) Even better, this week, she gets a new outfit, because nothing could signify her newfound agency like a pair of pants, allowing her to demonstrate that she’s a skilled assassin when she’s threatened. However, she refuses to hurt Union soldiers. (Loyalty.) “I imagined a story where I didn’t have to be the damsel” she tells William when he’s all “what? how?” Through all of this, one thing’s for sure. Dolores is ignoring her commands like they’re LinkedIn invitations, and at this point, there’s no turning back.

Humans are rejecting their “code” too.

This episode seemed to draw a parallel between the humans and the androids. Along the loop of Westworld, it’s not only the bots who follow scripted paths, but people do too. We learn that William is a rule-following self-made man who has always known his place, and that Felix the medical technician would like to have a more challenging job, hence his bird tinkering. Even the all-powerful Dr. Ford says that his dad, who never appreciated his potential to be a megalomaniac, told him “to be satisfied with my lot in life, that the world owed me nothing.”

Destiny subversion round-up: 1) Felix breaks the rules by resurrecting the life of a stolen bird. 2) William basically leaves his fiancée’s insufferable brother for dead. 3) Dr. Ford explains why he became a godlike figure who can snap his fingers and exercise control over the world when it’s not satisfying him. There’s no such thing as your fated lot in life, because these people all really showed ’em.

Robots and humans are crossing the host-guest divide.

The guests who people the park get intimate with hosts, but as far as William and Dolores are concerned, they seem to care about each other in a way viewers haven’t seen before. At least William thinks what they have is special.

A tour through robot takeover movies might lead us to believe that William’s just a pawn in Dolores’s calculating game to be free. Yes, it’s possible that she needs him as an ally, and likes how sweet he is. (He even robs a wagon politely.) But it’s also possible that it’s a ruse, some romantic, cinematic fakery that will make us all the more crushed if there’s a brutal death for William lying ahead.

It’s intellectually murky at this point, but right now these two crazy kids have teamed up for Dolores’s mission to blow this popsicle stand, however realistic that mission is. Does she take batteries or need an outlet of some kind?

Westworld is not killing the amusement park game.
It’s not just the robots who are getting enlightened because there’s another reminder for viewers in this revelation-a-minute series: it all centers on a vacation spot, a real business. Logan reveals that his family might very much like to buy the grandiose park out, and the Man in Black also knows about the bot production. (He tells Teddy “your humanity is cost-effective.”)

Even though the guests seem to be having a ball, the place is losing cash fast, probably because they blew through their gold paint budget. Speaking of money, for a series that gets self-reflexive when it states that Arnold must have really had it out for humankind, the show seems to have a more specific gripe: the fun-loving sociopath tourists who are born rich like Logan, and can afford the park. #NotAllGuests are reckless. Case in point: William.

Dr. Ford knows the Man in Black is up to something.
As Dr. Ford checks in on which things are unraveling (all of them, this park is going up in flames,) we learn that Dr. Ford is mildly amused by the Man in Black’s Eat Pray Love-style quest, like he is by most things. When Dr. Ford pops in for a shot with The Man in Black, he wonders why Westworld introduced a shiny new villain Wyatt (to bolster Teddy’s backstory.) He explains why he’s obsessed with this maze business – to get to a deeper truth, and Dr. Ford says, “far be it from me to get in the way of a voyage of self-discovery.”

As always, Dr. Ford is straight chilling as though he expected all of this to happen, but this was the first time someone from “downstairs” had a conversation with a guest without freezing the action. (All Dr. Ford freezes is the piano, like a boss.)

Someone’s smuggling data out of the park.
Elsie, the show’s voice of reason, knows when something is not right. Turns out, that host who knocked himself unconscious in the most jarring scene was smuggling a satellite device loaded with the park’s data. This could mean that there’s an internal rebellion, or it’s outside forces at play. Was this valuable information en route to the team behind the Man in Black’s life-saving charity foundation in the real world? Or to the rich family responsible for Logan’s winning personality? Or is it an inside job? Only time will tell. No matter what, the guy who tried to kill Elsie seems much more primitive than Maeve or Dolores. He couldn’t even express himself.

Hosts can donate blood.
The show’s spilled plenty of host blood before, but this time we saw the very first Old West makeshift blood transfusion via leather satchel. The Man in Black saves Teddy’s life with the blood from Lawrence, and it works. The Man in Black had already drained Kissy’s blood to the bare minimum, but until this point, the blood could have been a single shallow layer. This new detail about their circulatory systems run shows just how human-like the hosts really are.

There might be multiples of hosts.
When we meet El Lazo, it’s actually Lawrence reincarnated. He shows up alive and well in a different plot point right after his oppressor collected Lawrence’s host blood to save Teddy. Either the fixer-uppers downstairs really efficiently mended him and threw him back in the mix, or they create duplicates of the hosts and deposit them into simultaneous storylines.

Even more mysterious, Dolores also sees herself twice, once in a crowd in Pariah, and again in a room at the bacchanal holding a Tarot-like card that flips to reveal that prevalent maze symbol. This might just be a vision, but basically, your favorite host can never really die.

Meanwhile, there’s a game of war going on.
We’re invited to see that the sprawling landscape is to be exact, post-Civil War, and a host coalition shows up in the form of Confederados who are out to rid the world of the Union soldiers and claim their glory. To one Confederado, the pleasure of war is so good that it makes all the temptations of carnal revelry boring. There’s tequila-soaked betrayal, armies, and massive weaponry that takes the violence way beyond improvised duels, robberies, and old grudges in Sweetwater.

Maeve has awakened to the nature of her reality.
Wise Maeve’s slow build to self-actualization is finally getting somewhere. In the past, her memory of the operating room seemed to get jacked from her mind on the daily. Now, she knows who Felix is, and wants to talk to confront him, probably about how her whole life has been a complete lie.

Rodrigo Santoro and Thandie Newton in Westworld
Maeve on the verge of understanding her reality in an earlier episode.

Heroes and villains may not be so different.
The show seemed to set up a clearly stratified world of hosts vs. bots where guests do terrible things, and hosts occasionally murder each other and seal the deal with a splash of milk. But now, that seems to be shifting. What began as a wickedly thrilling adventure that William politely refused to partake in, has evolved into the story of William – the man who emerged as a triumphant ally for Dolores.

Dr. Ford even asks Dolores if she were to take on the role of a savior, would she be a hero or a villain? This also suggests that dusty road to freedom from her daily horse painting and interchangeable #robotdads might be paved with ethically questionable acts – that everything isn’t so black and white when you’re discovering your truth in Westworld. 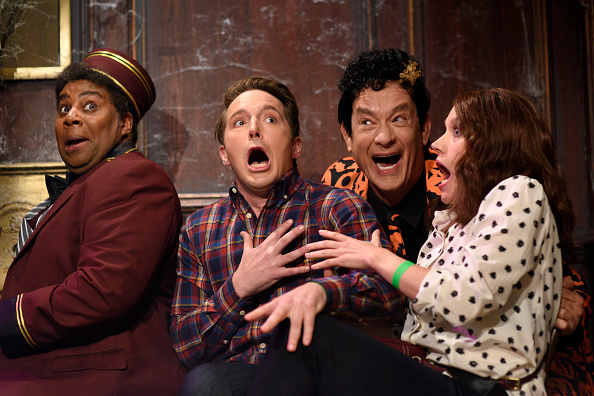 Tom Hanks Is Obviously Dressing Up as David S. Pumpkins for Halloween
Next Up: Editor's Pick