What to Know About Dia De Los Muertos 2016

Dia De Los Muertos, or the Day of the Dead, is a three-day celebration at the beginning of November that honors the deceased. The tradition originates from Mexico, but the holiday is now observed in Mexican-American communities in the U.S., Spain and some Central and South American countries.

Here’s what you need to know about it:

The official dates are Nov.1— Dia de los Angelitos, dedicated to deceased youth—and Nov. 2, Día de los Difuntos, for adults. Some believe in beginning celebrations on the evening of Oct. 31, proceeding to the graveyard where it is believed that the souls of young children rise at midnight.

While death and spirits often inspire fear on Halloween, Dia De Los Muertos celebrates and honors the dead instead. The tradition dates back to the Aztecs, who had a month-long celebration of death in honor of Mictecacihuatl, the goddess of the underworld. Due to the intervention of the Catholic, Spanish Conquistadores, the celebration now coincides with All Saints’ and All Souls’ days.

During Dia De Los Muertos, families visit cemeteries to hold vigils and bring ofrendas (offerings) to the deceased, such flowers, candles and food. Parties are often held during the annual event, which can involve the entire community, and it is thought that spirits will bless those who honor their dead relatives with good luck, wisdom and protection.

A woman with her face painted to look like the popular Mexican figure called "Catrina", poses for a photograph as she takes part in the annual Catrina Fest in Mexico City on Nov. 1, 2015.
Carlos Jasso—Reuters

At home, families create altars and honor the dead with sweetbreads, the deceased’s favorite food, marigolds (the flower of death), fresh water, trinkets and sugar skulls—which are inscribed with the name of a deceased relative and eaten as a reminder of death being a sweet continuation of the cycle of life. Skulls are commonly associated with the tradition and are thought to date back to the pre-Hispanic era. Mexican artist José Guadalupe Posada repurposed the skull in the 20th century, creating the popular image of a skeleton donning a hat known as Calavera Catrina.

How the tradition is evolving

The celebration is constantly evolving. In some parts of Mexico, children don costumes— quite like Halloween— for the Mexican version of trick-or-treating. On Oct. 29, Mexico City held its first Day of the Dead Parade, which officials say was inspired by the opening scenes of James Bond film, Spectre. 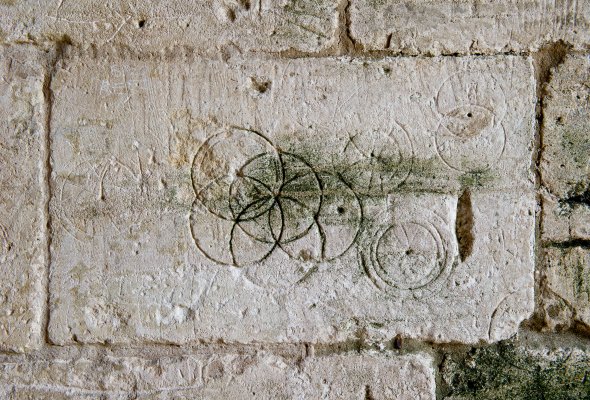 British Public Urged to Look for Witches' Marks on Doorways This Halloween
Next Up: Editor's Pick