Zayn Malik: Why I Went Public With My Anxiety Issues

Ideas
By Zayn Malik
Malik is a singer and songwriter, and the author of the new book, Zayn.

Performing artist and former One Direction member Zayn Malik has canceled past performances due to his struggle with anxiety. Here, he writes about that deeply personal battle.

I just couldn’t go through with it. Mentally, the anxiety had won. Physically, I knew I couldn’t function. I would have to pull out.

One of my team members offered to write a statement saying that I’d been taken ill, but I didn’t want to do that. I was done with putting out statements that masked what was really going on. I wanted to tell the truth. Anxiety is nothing to be ashamed of; it affects millions of people every day. I know I have fans out there who have been through this kind of thing, too, and I wanted to be honest for their sake, if nothing else. When I was in One Direction, my anxiety issues were huge but, within the safety net of the band, they were at least manageable. As a solo performer, I felt much more exposed, and the psychological stress of performing had just gotten to be too much for me to handle—at that moment, at least. Rather than hiding away, sugar-coating it, I knew I had to put it all out there.

“I’m gonna tell them the truth,” I said. “I don’t want to say I’m sick. I want to tell people what’s going on, and I’m not gonna be ashamed of what’s happening.” My team was really supportive of my decision, and they agreed that, at this point, our best option was to be honest. That was refreshing, and it made me feel a bit more confident about putting out the statement. This is what it said:

Of course, this opened up an insane amount of speculation. All sorts of stories were flying around afterward. All I’d say is: Always take everything you read online with a pinch of salt.

I found it really frustrating that, even now that I was being upfront about what the issue was, some people still found reasons to doubt it. But that’s the industry. It’s an aspect of this job that I have to deal with, and I’m trying to accept it. The thing is, I love performing. I love the buzz. I don’t want to do any other job. That’s why my anxiety is so upsetting and difficult to explain. It’s this thing that swells up and blocks out your rational thought processes. Even when you know you want to do something, know that it will be good for you, that you’ll enjoy it when you’re doing it, the anxiety is telling you a different story. It’s a constant battle within yourself.

After I put out that statement I was blown away by just how many people got in contact, and how many people suffer from anxiety. It’s so common, and that’s not surprising, really. Life bombards us with pressure—Twitter, Facebook, Instagram… everywhere online there are unattainable body images that make us feel inadequate; competitive messages that bring us down; there’s pressure from our parents and our peers to excel—pressure everywhere. When that pressure is magnified by living your life in the limelight, it can be pretty tough to handle: There’s a lot of negative chat and hate out there. But what I found in the wake of my cancellation at Wembley wasn’t hate but a massive amount of support from fans—people who understood, kids who were in the exact same situation as I was. Guys on Twitter were telling me how anxiety had affected their lives and saying that they were glad I had spoken up. It felt as though some good had come from the situation.

Americans Are the Unhappiest They've Been in 50 Years: Poll

This article is excerpted from the upcoming book, Zayn, available on Nov. 1, from Delacorte Press. Republished with permission. 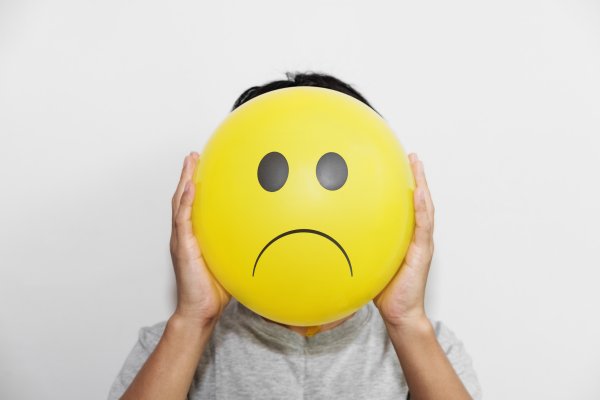 Americans Are the Unhappiest They've Been in 50 Years: Poll
EDIT POST