The Chicago Cubs knew what was at stake Sunday night. Sure, the team has won its first pennant in 71 years: an historic accomplishment. But an early World Series exit, at the hands of the underwhelming — on paper, at least — Cleveland Indians, would permanently mar an ecstatic season. A team that won 103 regular season games, and dominated baseball, could not afford to lose all three of its World Series games at Wrigley Field. The Fall Classic appearance has left the North Side of Chicago giddy. But Wrigley is still starving for a win on the game’s grandest stage.

“Not being able to celebrate on our own field,” says Cubs left fielder Ben Zobrist, “would have been terrible.”

Chicago dodged its disaster. The Cubs, trailing the Series 3-1 and facing elimination, eked out a tense, cathartic 3-2 win over the Indians in Sunday’s Game 5, to send the World Series back to Cleveland for a Game 6 Tuesday night, and, if necessary, a decisive Game 7 the following evening. The win completed what was, on balance, a weekend of gripping October baseball at Wrigley’s “Friendly Confines.” Two of the three games were low-scoring chess matches decided by a single run (Cleveland won Game 3 on Friday, 1-0). Each manager pushed bullpen buttons, looking for match-up advantages; each team came excruciatingly close to altering the outcomes.

If these upcoming games in Cleveland match the drama of Games 3 and 5, this World Series will enjoy one whale of an ending.

Zobrist, aware that Chicago was now the underdog, brought in the Rocky movies; the films played on a loop in the Cubs clubhouse before Game 5.

“I grew up watching Rocky with my pops,” says Cubs right fielder Jason Heyward, who is starting to make solid contact after enduring a horrendous postseason slump. “Seeing the movies up on the screen brought the team together. We embrace those kinds of moments.”

Cubs manager Joe Maddon didn’t need to deliver any rah-rah rallying cry. “I really don’t believe in the speech thing,” says Maddon. “I’ve sat on the floor and received speeches and I never was really … it never inspired my performance. I mean, in our game it might get you worked up for couple of minutes. When you go out there and you’re facing somebody’s slider on the black, that speech goes away very quickly.”

Maddon did home in on one message: score first. Cleveland’s bullpen has flummoxed Chicago all series. If the Indians built a lead, they were in prime position to send the Cubs home.

In the top of the second, Cleveland third baseman Jose Ramirez launched a 383-foot home run into the left field bleachers to put Cleveland up 1-0. For once this weekend, however, the Chicago’s bats refused to wilt. In the fourth, the Cubs gave Wrigley the rally it was craving. A three-run flurry featured a Kris Bryant home run, an Anthony Rizzo double, a Ben Zobrist single, an Addison Russell infield single, a Javier Baez bunt single, and a David Ross sacrifice fly.

“We breathed a little life into the stadium,” says Zobrist. “You could feel the energy skyrocket.”

Cleveland tacked on another run in the top of the sixth, thanks to an RBI single from shortstop Francisco Lindor, to cut Chicago’s lead to 3-2. In the seventh, Maddon called on closer Aroldis Chapman to record a rare eight-out save. Chapman delivered 42 pitches; his previous career-high was 36. He threw 26 for strikes, and 19 over 100 mph, a new postseason record.

His only hiccup was the top of the eighth. Chicago’s Anthony Rizzo dove to catch a Rajai Davis ground ball, but Champan forgot to cover first, allowing Davis to reach on a single with one out. Davis then stole second, putting the tying run in scoring position. But Chapman got Jason Kipnis to foul out to left, and after Davis stole third, Chapman stuck out Lindor looking on a 101.3 mph four-seam fastball.

“I grew up as a kid watching baseball,” says Hayward. “I’m still a fan, a grown man who gets to play a kid’s game. Moments like that give you chills.”

No one in the Cubs bullpen even considered warming up after Chapman entered the game. “We didn’t move at all,” says Cubs reliever Mike Montgomery. “We knew he was going until the end.”

The 3-1 deficit no longer daunts Chicago. The Cubs now just need to rattle off a two-game winning streak. Someone informed Bryant today — correctly — that 17 times this year, the Cubs won three or more games after losing one. “So why can’t we do that now?” Bryant says.

“We’re making history,” says Russell. “Why stop? This is entertaining to us.”

The fun continues Monday, on Halloween, when the Cubs travel to Cleveland. Rather than leave Chicago early in the day and arrive at Progressive Field for a workout, buses are scheduled to leave for the airport in Chicago at 7 :00 p.m., giving the players a full day off. A sign in the Cubs clubhouse reads: “Halloween costumes are encouraged on the plane.”

Heyward said he may have to do some shopping. Reliever Justin Grimm told Montgomery about a costume shop not far from Wrigley.

Grimm wants to go as the Grim Reaper. “We’re coming for you, Cleveland,” he says while walking out of the clubhouse. “Let’s go.” 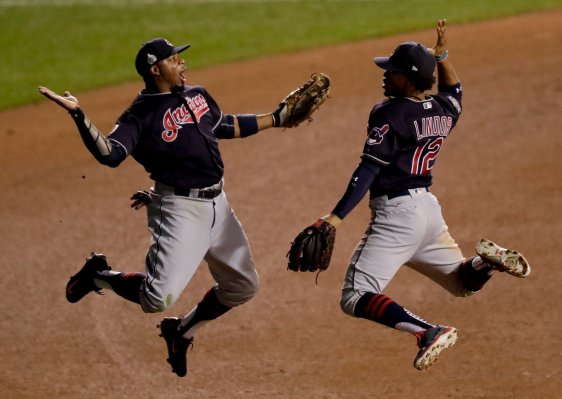 Chicago Cubs Trail in World Series
Next Up: Editor's Pick